Bannon on Brazil riots: ‘I’m not backing off 1 inch’ 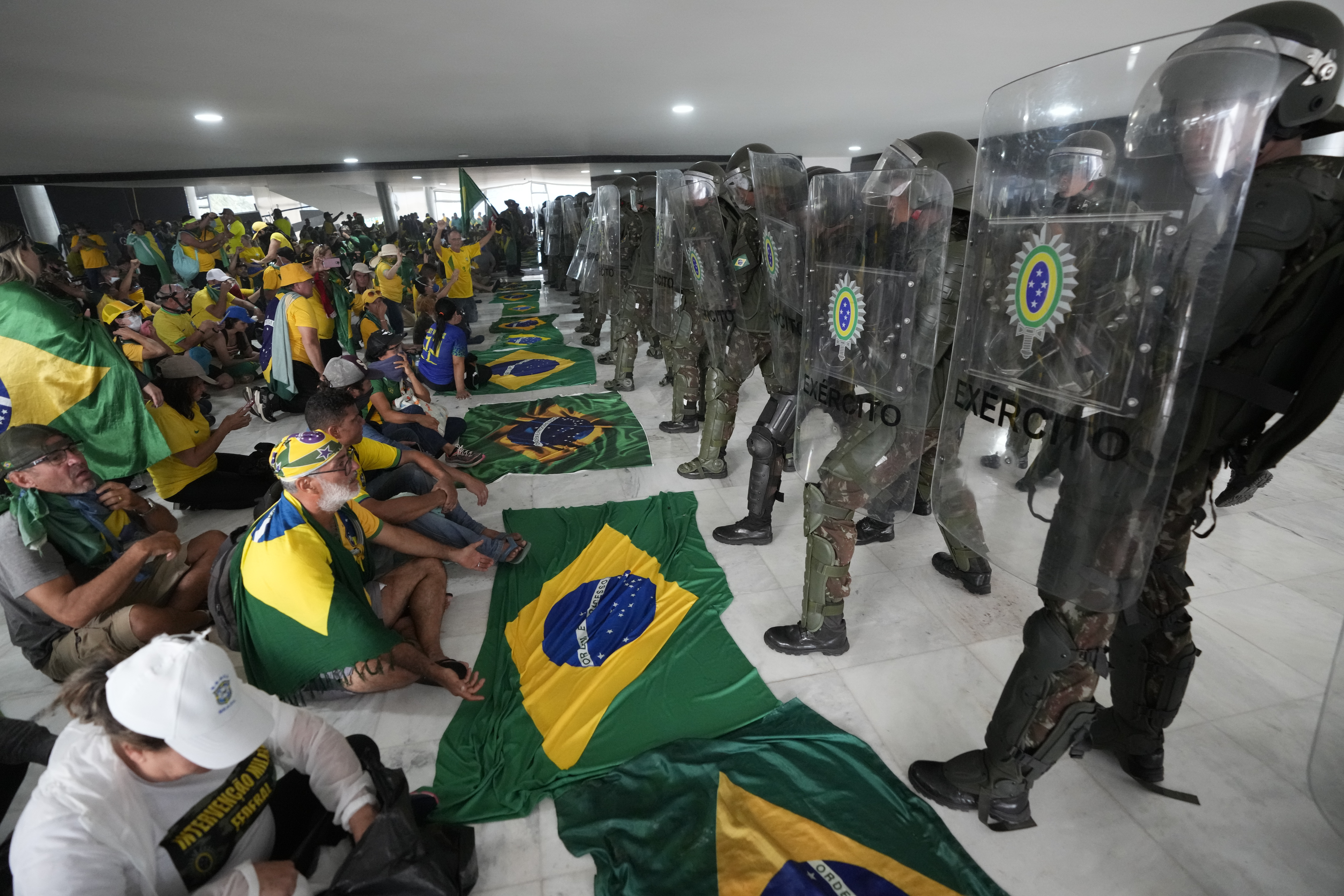 The storming of the presidential palace and trashing of government buildings in the Brazilian capital by thousands of supporters of former President Jair Bolsonaro sent shockwaves across the hemisphere.

But on Monday morning, one of the main U.S. voices encouraging Bolsonaro supporters to question the results of the country’s presidential election last year declined to tap the brakes.

“I’m not backing off one inch on this thing,” said former Trump adviser Steve Bannon in an interview. Earlier in the day, he repeated his claims of election fraud in Brazil and called on the current president, Luiz Inácio Lula da Silva, who beat Bolsonaro, to open up an investigation.

“Look at the report, the code, the tabulator, the machines and open them up … be transparent, let the citizens of Brazil see,” Bannon said on his “War Room” podcast.

Bannon’s support of the protesters, whom he called “freedom fighters,” has prompted renewed criticism of both him and the larger MAGA movement that has spread election denialism at home and abroad.

The violent outburst in Brasília on Sunday was swiftly compared to Jan. 6, 2021, when a similarly angry crowd rioted at the U.S. Capitol in protest over Donald Trump’s loss and the rioters’ unfounded belief the election was fraudulent. Bolsonaro lost his presidential election by a small margin in a runoff to Lula and never formally conceded.

A later report by the military outlined technical risks to Brazil’s election system but found no sign of vote-rigging. But Bolsonaro’s supporters have continued to demonstrate in the streets over the election.

They have found supportive voices in the U.S. in doing so. For months, Bannon and other far-right commentators have been following the unrest in Brazil and have encouraged the protesters to continue to challenge the results. Bannon said he has remained close to Eduardo Bolsonaro, Jair Bolsonaro’s son. And Conservative political institutions in the U.S. have allied themselves with former president Bolsonaro, as well.

The influential conservative group CPAC has held conferences in Brazil in recent years at which Bolsonaro and his allies have appeared. And in mid-November, Eduardo Bolsonaro attended the America First Policy Institute’s gala. The Trump-inspired think tank held the event at Trump’s Palm Beach Mar-a-Lago club, where the younger Bolsonaro later joined a table on the patio with Trump and gubernatorial candidate Kari Lake, AFPI chair Linda McMahon, and Trump aides Sergio Gor and Boris Epshteyn.

Trump himself was closely aligned with Bolsonaro during his time in office, endorsing the Brazilian’s reelection and forging philosophical agreements with him on a variety of matters: from downplaying the threat of Covid to open hostility to the press. Among world leaders, Trump counted Bolsonaro, deemed “the Trump of the Tropics,” as a “great friend.”

During the closing days of his administration, Eduardo Bolsonaro and his wife, Heloisa, visited the Trump White House for a meeting with Trump’s daughter Ivanka. They were accompanied on that Jan. 4 outing by Brazil’s ambassador, Nestor Forster Jr. After the meeting, Eduardo posted a picture of Ivanka Trump holding his child.

But since Jair Bolsonaro’s ouster from office the relationship has chilled, advisers say. The former Brazilian president has decamped to Florida, but he has not made a visit to see Trump, his Sunshine state neighbor.

Bolsonaro did not spend New Year’s Eve with Trump at Mar-a-Lago, according to multiple people who denied reports that Bolsonaro planned to spend the holiday there instead of Brazil, where his political rival was being inaugurated.

People close to Trump stress that while he was supportive of Bolsonaro’s campaign, the unrest in Brazil has nothing to do with him, a sentiment shared by others on the right.

“They’re both yesterday’s news: Bolsonaro is now a citizen and is in Florida, and the protests are about the sovereignty and constitutional evisceration by the supreme court and Lula’s cronies,” said Matthew Tyrmand, a conservative activist who has frequently appeared on Bannon’s “War Room” podcast, and denied there are dots to connect between Trump and Bolsonaro. “The only correlation [between Jan. 8 and Jan. 6] is you have people who are angry and distrustful of the government.”

But there is another similarity, too. The election protests in Brazil, like those in the U.S., were fed by commentary on the right questioning the legitimacy of the result. Tyrmand has repeated Bannon’s claims of election fraud and is also among those who have pointed to allegations of corruption made against Lula, including charges of money laundering that followed an investigation into a huge bribery scandal called “Operation Car Wash.” The scandal took down dozens of politicians in Brazil, but Lula’s case was later nullified.

Those charges have continued into the post-election period. In a video appearance at CPAC Mexico in November, Bannon said that the protests have “gone beyond the Bolsonaros, this is a fight that is saying, you went beyond the constitution, you used these machines, the judiciary, to shut us down in the media and we’re not going to tolerate it, it’s going to be very interesting to see how that plays out.” The video of his speech was shared by Eduardo Bolsonaro on social media.

On Monday, he picked up those themes once more.

“The people down there — they’re not watching ‘Bannon War Room,’” Bannon told POLITICO. “Millions are going through the streets. It’s a self organizing protest … this is beyond Bolsonaro.”

Jair Bolsonaro, through it all, has kept relatively quiet.

He did, however, criticize the protesters in a Twitter post on Sunday evening and denied any involvement in the planning or execution of the riots that swept through Brazil’s capital. Since he lost his election in October, the far-right leader has not conceded defeat. He is currently living in the suburbs of Orlando, where he has been spotted noshing on American delicacies like Kentucky Fried Chicken. On Monday, he was sent to a hospital for abdominal pain, according to Brazilian reports.

LLiberal News
Belgrade sought NATO’s authorization for deployment after a string of violent confrontations.
LLiberal News
MEXICO CITY — Joe Biden has no shortage of topics to tackle in his first presidential trip to…
LLiberal News
The Baltic states have incurred the wrath of their large neighbor.
LLiberal News
The Atlanta-area district attorney investigating Donald Trump’s effort to subvert the 2020 election indicated on Tuesday that decisions…
LLiberal News
Kevin McCarthy is kicking his bid for the speaker’s gavel into a historic third day after Republicans adjourned…
LLiberal News
The Justice Department is signaling that it has the right to not cooperate with Hill Republicans’ requests to…