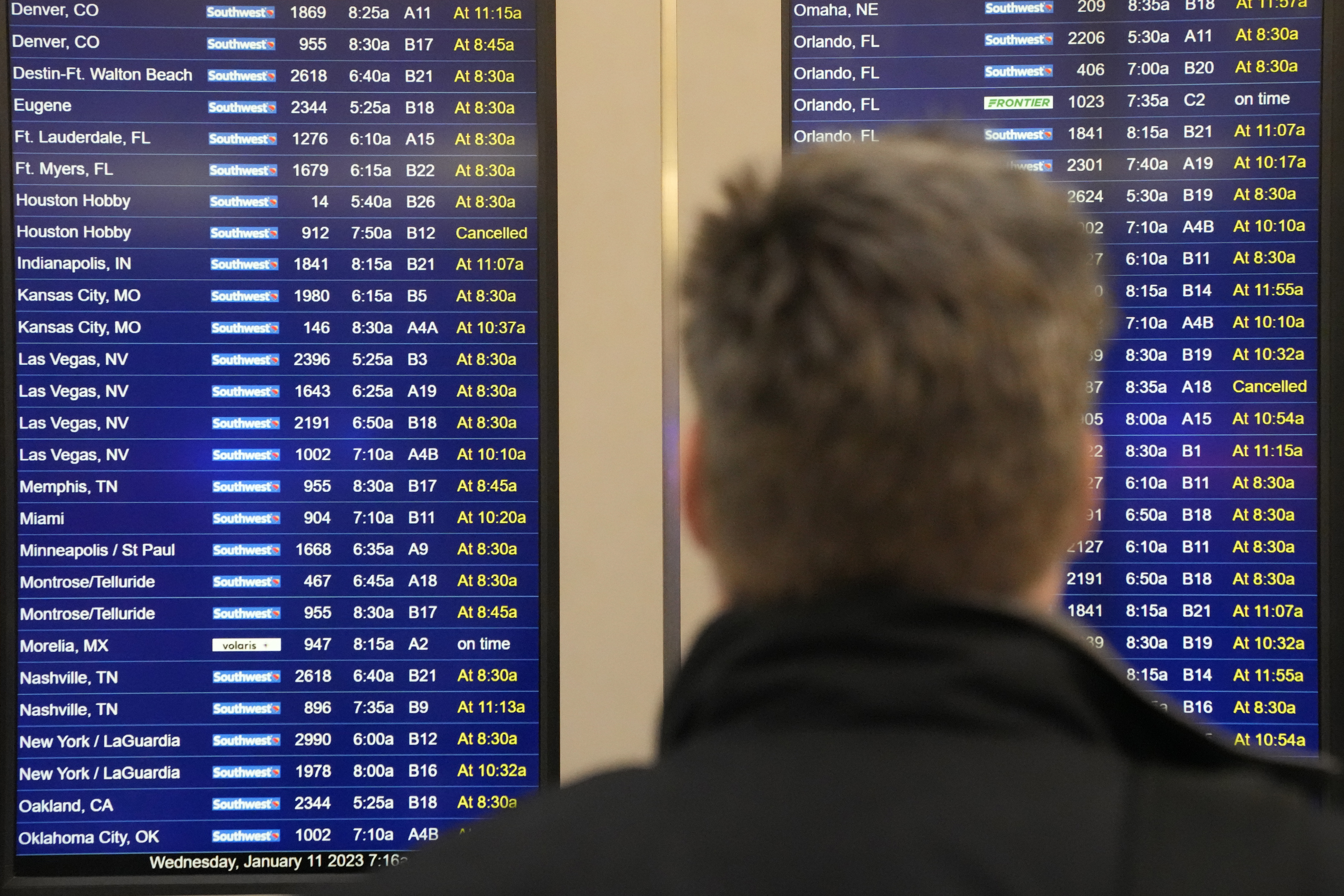 Wednesday’s nationwide flight meltdown has made Transportation Secretary Pete Buttigieg a prime target for Republicans’ coming oversight onslaught, with some conservatives accusing the administration of prioritizing “wokeness”over the reliability of the nation’s aviation system.

The Federal Aviation Administration has not yet pinpointed the cause of the agency computer failure that grounded all domestic flights Wednesday morning, in the biggest shutdown of U.S. aviation since Sept. 11, 2001.

But GOP lawmakers were quick to seize on the opening to heap blame on Buttigieg, a rising star of the Democratic Party, and air broader complaints about the Biden administration’s priorities on issues such as social equity and climate change. They also added to their complaints that President Joe Biden’s nominee to head the FAA, Denver airport chief executive Phil Washington, lacks the aviation background needed to run the sprawling federal aviation agency.

The computer system that failed ensures that pilots received updated information about critical safety items such as closed runways or airports.

The FAA used to call that system “Notice to Airmen” but recently renamed it “Notice to Air Missions” — a less sexist term, but one that drew some conservatives’ ire amid Wednesday’s chaos, despite any obvious connection to the computer failure.

“Instead of focusing on real transportation issues, @SecretaryPete and his minions have focused on woke garbage like” the name change, Arizona Republican Andy Biggs charged on Twitter.

Some GOP lawmakers have also faulted Buttigieg in recent weeks for last year’s supply chain drama, the freight rail strike that brought the nation to the brink of catastrophe, and Southwest Airlines’ winter flight disaster.

Such attacks have mostly failed to gain transaction against Buttigieg, a former Indiana mayor and one-time presidential contender who has been one of the most effective public advocates of President Joe Biden’s policies.

But Wednesday’s aviation snafu was entirely the product of a breakdown in one of Buttigieg’s own agencies.

Speaking with reporters after a speech at a transportation conference Wednesday, Buttigieg said that when a government system fails, “we’re gonna own it” and find the root cause.

He also suggested that the flights were grounded to ensure that passengers and crew boarded their planes knowing they were safe.

“What people need to know is that we will not allow anything to take place that is not safe. This is precisely why our focus right now is on understanding and identifying and correcting anything related to causing potential system vulnerability,” he said.

Buttigieg said the FAA had enabled a backup system on Tuesday before the main system came back online, but that it became clear overnight that there were “issues in the accuracy of the information” leading the agency to reboot it around 5 a.m. The call to institute a ground stop came around two hours later when the FAA could not “sufficiently validate” that the issue had been fully resolved.

Though Buttigieg said the outage took place “overnight,” it actually began around 3:30 p.m. Tuesday Eastern time, according to a series of public alerts published by the FAA as part of a public database.

He also said that while there’s been “no direct evidence” that a cyberattack was involved, “we are also not going to rule that out until we have a better understanding of what’s taken place.”

The sudden failure of the system came just weeks after Southwest Airlines delayed and canceled thousands of flights during the Christmas holiday week due to its own computer breakdowns. It places Buttigieg firmly in sight for a newly emboldened House Republican caucus eager to pound the Biden administration over its policies. And it comes as the FAA lacks a Senate-confirmed administrator, following former chief Steve Dickson’s resignation in March.

Vacancies at the FAA

After Wednesday’s meltdown, Republicanswere sharpening their knives afresh over Phil Washington, Biden’s pick to head the FAA, whose nomination has been in limbo since last year.

Texas firebrand Sen. Ted Cruz, who is next in line to lead Republicans on the Senate Commerce Committee, which has jurisdiction over aviation. said Wednesday that the FAA system outage “is completely unacceptable and just the latest example of dysfunction” at DOT.

Cruz added that it “highlights why the public needs a competent, proven leader with substantive aviation experience leading the FAA.” He and other Republicans have criticized Washington for his thin aviation résumé as well as a politically charged contract dispute in Los Angeles County he was caught up in last September. Washington has denied any wrongdoing.

Sen. Roger Wicker (R-Miss.), the current Republican leader of the Commerce Committee, was even more blunt, calling for Biden to nominate a new person.

“The FAA does not run on autopilot – it needs skilled, dedicated, and permanent leadership in positions across the agency, starting with the Administrator’s office. It’s been nearly a year since the FAA has had a permanent Administrator, and with the current nominee’s troubling resume, the Biden Administration seems to think this lack of qualified leadership can go on indefinitely,” he said in a statement.

The agency has taken criticism in recent years for its creaky computer systems and other air-control technology, and its guiding statute is due for a congressional revamp before it expires next fall.

One of the FAA’s higher-profile modernization projects, dubbed NextGen, has been in a continuous state of modernization since the mid-2000s. That project, which is intended to move the U.S. from its current sonar-based air traffic control to one that uses GPS signals, has long been plagued by cost overruns and delays.

The system that failed Wednesday is also part of an ongoing modernization project, which aviation safety expert and retired airline pilot John Cox said is focused on the content of the notices — which can be long and easy to miss important information — rather than how they’re sent to pilots. “Today was a new problem for that,” he said of NOTAM distribution.

NOTAMs can be delivered to pilots electronically via iPads or “literally reams of paper” with safety information about departure and arrival airports as well as alternative airports they may encounter due to flight changes, he said.

The main question that must be addressed, Cox said, is where exactly the system failed and, if it was a single-point failure, how a fix could be designed around it to ensure it doesn’t happen again.

“Whether we need to implement newer technology, I don’t think that question has an answer yet,” he said, adding that even the most modern systems can fail.

Former House Transportation Chair Bill Shuster (R-Pa.) pushed an effort during the Trump administration to remove air traffic control operations from the FAA’s direct control, but it fizzled for lack of support.

Rep. Garret Graves (R-La.), who leads the House aviation subcommittee, indicated he’ll be holding the FAA accountable. The agency has taken criticism in recent years for its creaky computer systems and other air-control technology, and its guiding statute is due for a congressional revamp before it expires next fall.

“Today’s failure of the FAA has wreaked havoc across the country,” he said. “The past year has made clear that significant improvements across the aviation system are needed. We will aggressively pursue accountability and craft reforms that focus on enhancing the passenger experience.”

Former Rep. Rodney Davis, a top-ranking T&I Republican before he lost his primary last year, urged his party to give Buttigieg some time to figure out what happened.

“Republicans need to give the secretary a chance to explain what happened too, without immediately going on the attack,” he said, noting that the House Transportation Committee, which Republicans now chair, typically works in a bipartisan fashion.

Biden said Tuesday morning that he’d spoken to Buttigieg about the issue and asked DOT to “to report directly to me when they find out” what caused the outage.

Senate Commerce Chair Maria Cantwell (D-Wash.) also indicated that her committee would be looking for policy solutions to the vulnerabilities put on display by Wednesday’s outage.

“As the Committee prepares for FAA reauthorization legislation, we will be looking into what caused this outage and how redundancy plays a role in preventing future outages,” she said. “The public needs a resilient air transportation system.”

Airline industry analyst Robert Mann said in an interview that Wednesday’s chaos is “not a good look” for FAA as it tries to assert its ability to manage repeated airline disruptions and hold the industry accountable.

“One would assume that an online, high-reliability system like this that is safety-sensitive would have fallback capabilities” to avoid an outage like the one that happened Wednesday, Mann said. He said the hardware and software the FAA relies on is “decades old” and while upgrading it makes sense, that process is also cumbersome as it requires testing a new system while simultaneously running the old system.

The outage did not affect military aviation, as the Department of Defense uses a different system.