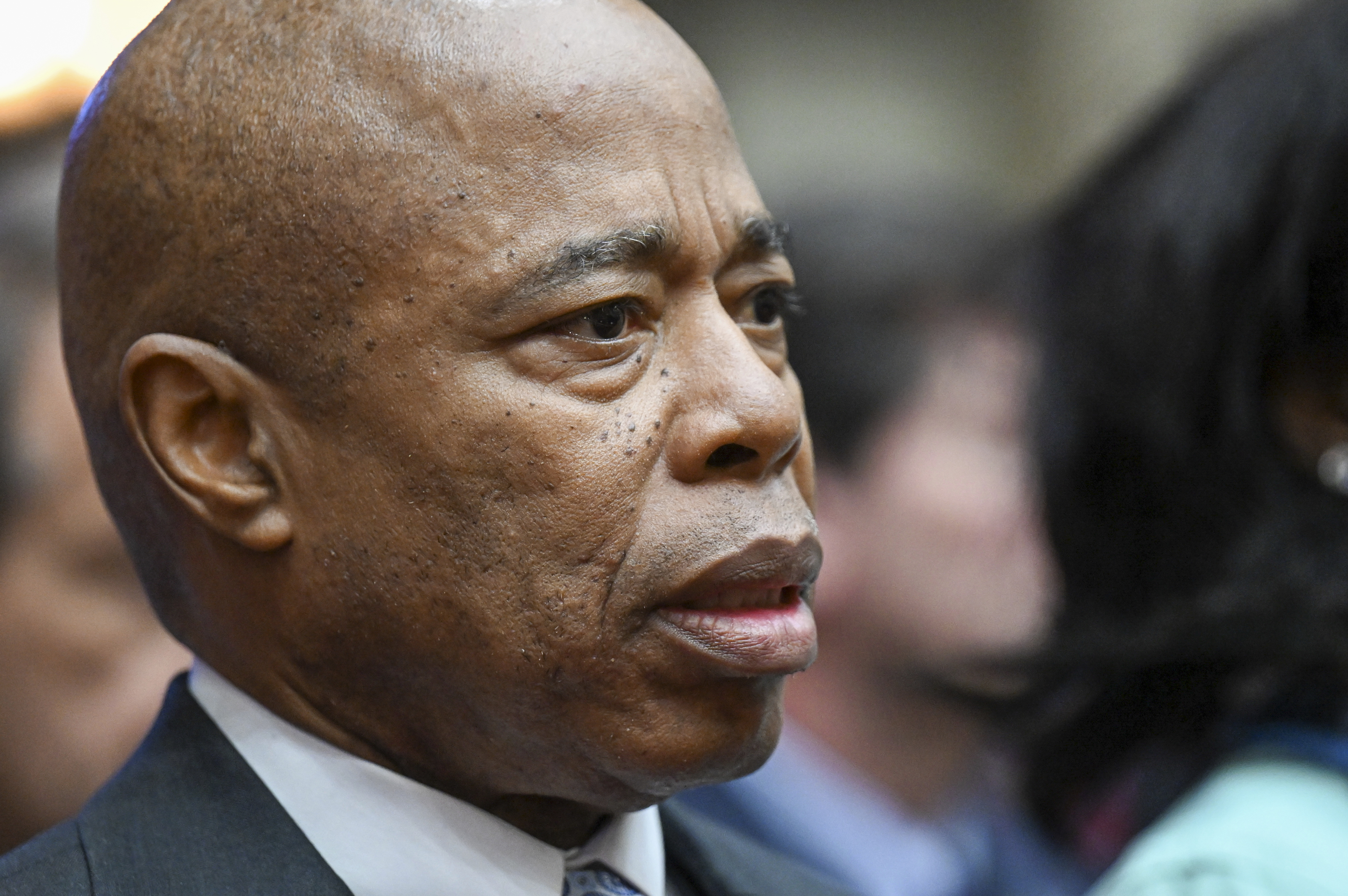 New York City Mayor Eric Adams visited El Paso, Texas, over the weekend, where he said he and fellow municipal leaders around the country would be teaming up to pressure the federal government for assistance handling the migrant crisis.

Adams touched down Saturday evening for what was billed as a 24-hour fact-finding mission, hosted by El Paso Mayor Oscar Leseer, a fellow Democrat. More than 40,000 migrants who have arrived in border towns like El Paso have subsequently traveled to New York City in the last year, an influx Adams has warned is overwhelming his administration’s ability to provide services.

During a press briefing Sunday, he pledged to form a coalition with mayors facing similar situations.

“I knew it was time for me, not to try to handle this problem from the city, but to come in to interact with the mayors across the country,” Adams said. “This has fallen on our cities. And I am now going to coordinate my mayors across the entire country to say: How do we respond to this directly?”

Next week, Adams plans to be in Washington, D.C., to bring up the issue at the United States Conference of Mayors.

Whether the Senate, Congress or President Joe Biden, who visited El Paso last week, will respond to the nascent coalition is unclear.

“This is a national crisis. FEMA deals with national crises. FEMA must step up, and there should be one coordinator to coordinate everything that is happening dealing with migrants and asylum seekers in our country,” Adams said.

The mayor’s first stop Saturday night was at a chain-link fence topped with razor wire frequently used as a border crossing point. Leeser then took Adams through a part of the city where asylum seekers often sleep on the streets. The following day, Adams met with the mayor and other El Paso officials before visiting a church that provides services to migrants. Outside, Adams and his Immigrant Affairs commissioner, Manuel Castro, talked with asylum seekers before visiting a county office that connects migrants with various programs and a processing facility run by the U.S. Customs and Border Protection agency.

The mayor said misinformation has led many migrants to the five boroughs.

“There are websites that are advertising that [in] New York City basically streets are paved with gold, that there is automatic employment, that you are automatically going to be living in a hotel,” Adams said. “There’s a conversation among those who are … asylum seekers and migrants who are given the false impression that, if you come to New York City, everything is fine.”

The city is housing some migrants in hotels in addition to group shelters.

Others, he added, were drawn to New York City because they had watched him on television.

“We spoke to some people, they said, ‘Why are [we] coming to New York? Because we saw you on TV,'” Adams said.

“They are truly explaining to people that this is what’s happening in New York right now,” Adams said. “In New York you go there, you’re going to be living in congregate settings, that there is no more room in New York.”

“Yesterday, @NYCMayor traveled to the border to draw attention to how the migrant crisis is impacting cities like New York, Chicago, Washington, D.C., and others,” Lightfoot tweeted Sunday. “I agree wholeheartedly with Mayor Adams that this is a national crisis that demands a national solution,” she wrote.

Progressives back in New York City, however, panned the visit.

“There are many ways to demand the help we need from Washington & Albany. But the mayor’s trip to Texas does little to deliver the $$ NYC needs to provide shelter & services,” City Comptroller Brad Lander tweeted. “Instead, it risks reinforcing a harmful narrative that new immigrants themselves are a problem.”

Make the Road New York, an immigrant advocacy organization, criticized Adams for threatening budget cuts because of the cost of asylum seekers and said he could be doing more to solve the problem back home.

“The absolute last thing New York City needs is Mayor Adams grandstanding on the border while New Yorkers are struggling,” Co-Executive Director Jose Lopez said in a statement. “Instead of trying to play ‘national political figure,’ the mayor should be in our city, focused on solving the real problems facing New Yorkers — including the need for truly affordable housing, tackling homelessness, and ensuring that everyone, regardless of their immigration status, has access to the services they need.”

On Sunday, Adams did not rule out meeting with more mayors around the country on the issue.

“Today its El Paso,” he said. “Tomorrow it could be their cities.”

LLiberal News
Fifteen ballots later, the House GOP has begun its official organizing of the 118th Congress. And it’s proving…
LLiberal News
A handful of Republicans who remained in the Jan. 6 committee’s sights throughout its investigation are now leading…
LLiberal News
The appointment of special counsel Robert Hur on Thursday marks the first time a sitting president and his…
LLiberal News
“Go on @CNN and cry about it,” he wrote to the retired congressman.
LLiberal News
A federal judge on Thursday rejected a last-ditch effort by Peter Navarro, a former adviser to former President…
LLiberal News
The Biden administration is leaning toward sending “a significant number” of M1 Abrams tanks to Ukraine, two U.S.…