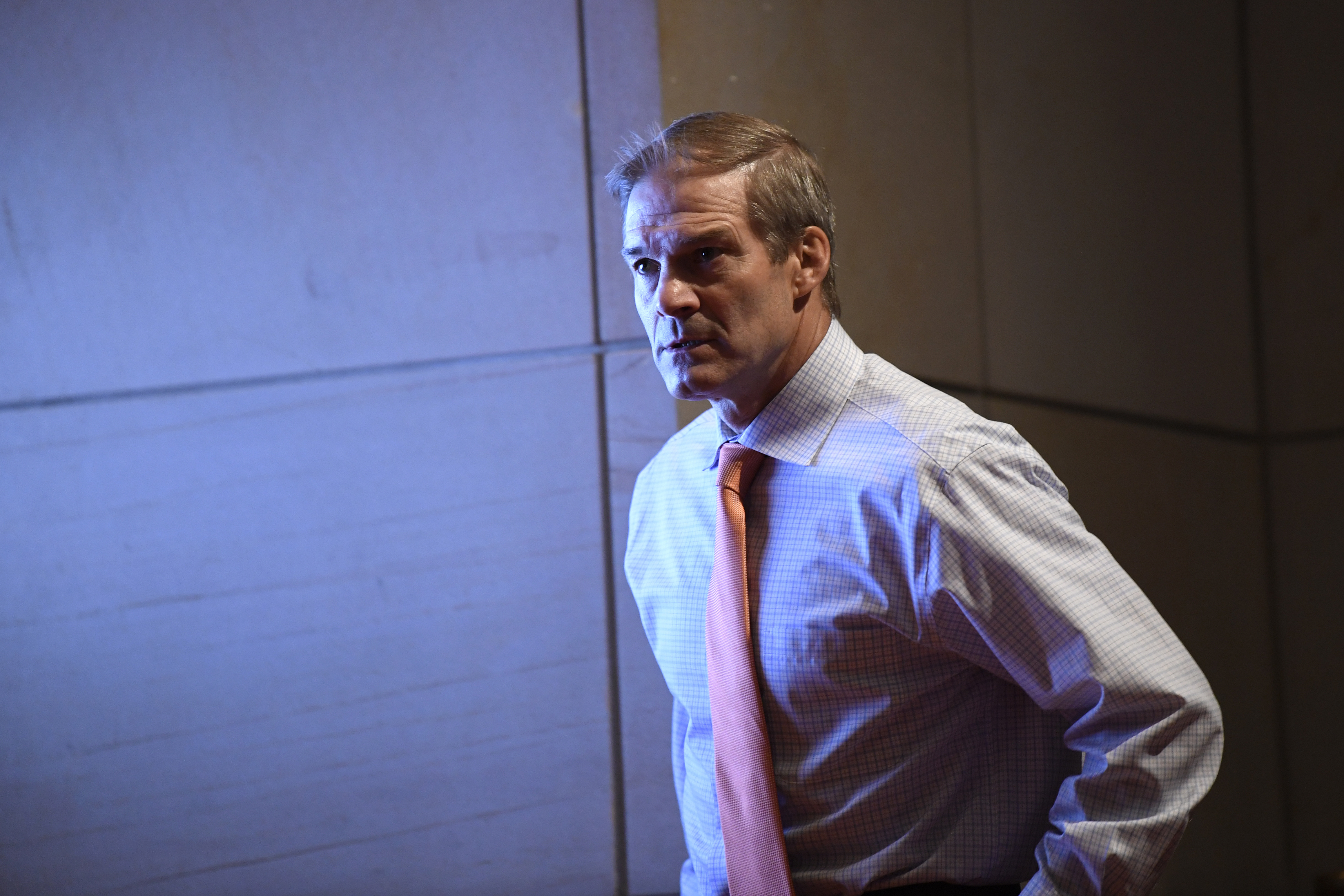 House Republicans are declaring what amounts to an investigative war on the Biden administration, pledging to probe “ongoing criminal investigations” at the Justice Department.

Veterans of some of Congress’ recent major probes, and the department itself, predict that they’ll be told to pound sand.

GOP lawmakers dramatically escalated their standoff with the administration on Tuesday by approving on a party-line vote a wide-ranging investigative panel to probe what they call the “weaponization of government.” It’s a broad mandate that will allow the party to look into any government agency or program that it views as suspect, including the FBI, IRS and the intelligence community — making good on a key demand of a band of hardline conservatives who opposed Speaker Kevin McCarthy’s bid for the gavel.

And it’s an opening salvo that promises to escalate quickly. The Justice Department is certain to fiercely protect its most sensitive investigative files and prosecutors are simply not going to hand over information on open criminal probes, legal experts say. The resulting conflict promises to erode the already strained relationship between DOJ and congressional Republicans.

“This will be a separation of powers hornets’ nest,” said former House General Counsel Stan Brand, who represented witnesses before the Jan. 6 select committee, including Dan Scavino, a top adviser to former President Donald Trump. “In order to insulate the process from taint, [DOJ] will have to draw clearer ‘lines in the sand’ over what they will provide.”

The genesis of the proposed select panel — which would operate underneath the Judiciary Committee, chaired by Rep. Jim Jordan (R-Ohio) — has exacerbated concerns among DOJ allies about how GOP lawmakers will use their broad directive.

Notably, those seeking to access ongoing criminal matters are among the staunchest political allies of the former president whose efforts to overturn the 2020 election are the subject of a special counsel investigation. Several GOP members of Congress — including House Freedom Caucus Chair Scott Perry (R-Va.) — allied closely with Trump, prompting the department to scrutinize their actions.

Perry declined to rule out serving on the panel in an ABC interview on Sunday, asking: “Why should anybody be limited just because someone has made an accusation? Everybody in America is innocent until proven otherwise.”

Both Perry and Jordan were subpoenaed by the Jan. 6 select committee to testify about events surrounding the Capitol attack by a mob of the former president’s supporters. Both declined to comply with the subpoena.

Though GOP leaders have not yet announced any members of the new investigative panel, McCarthy has indicated to House Republicans that he anticipates Jordan will lead it. Rep. Dan Bishop (R-N.C.), who pushed for the investigative body for months, is viewed as a likely member. Rep. Thomas Massie (R-Ky.) has also said publicly he expects to participate.

The panel was greenlit after a months-long push by conservatives, growing from a fringe idea to a formal demand made by several McCarthy holdouts last month. It was one of the California Republican’s critical concessions as he sought to appease his right flank, whose support he’ll need not only to pass routine legislation but also to keep his job.

Bishop, one of his detractors, told POLITICO he expected to be on the committee and that his concern with oversight was less about Trump probes and more about methods used by federal law enforcement that have drawn intense criticism from some conservatives.

“Exactly what is the line on entrapment and then the law on entrapment?” he said in an interview, citing the federal prosecution of the Michigan militia members who planned to kidnap Gov. Gretchen Whitmer, which some on the right have flagged for its use of undercover agents and informants.

“I’m interested in how the American people are being treated more than I’m concerned about politicians,” he said.

Jordan, for his part, has made clear that he’s willing to go full tilt at the Biden administration, using subpoenas if necessary. Many areas the new panel plans to target are ones Jordan has already identified in letters saying he would move to compel testimony.

“[T]he committee has been given a ridiculously broad remit that, when invoked for partisan gain — as one can confidently predict — will surely lead to extensive conflict with the Justice Department and the president,” said Daniel Richman, a Columbia University law professor. Richman had his own brush with highly charged DOJ investigations after he helped facilitate the release of details about former FBI Director James Comey’s interactions with Trump.

DOJ has spent decades resisting similar queries. In 2000, the department issued a response to congressional inquiries, known as the “Linder Letter,” that outlined its staunch position against sharing information related to ongoing criminal matters. Then-Assistant Attorney General Robert Raben wrote at the time that congressional questions about pending matters “pose an inherent threat to the integrity of the Department’s law enforcement and litigation functions.”

That resistance came even during the first two years of the Trump administration, when Republicans controlled both chambers of Congress. As special counsel Robert Mueller explored connections between the Trump campaign and Russia, congressional Republicans dug into the origins of the probe — and attempted to get a glimpse inside Mueller’s apparatus — often meeting stiff DOJ resistance.

Critics of the proposed inquiry noted that DOJ could draw inspiration from Trump himself as it responds to House GOP queries. Of particular potential relevance, they say, are the former president’s efforts to block former White House Counsel Don McGahn from testifying to the Judiciary Committee — a challenge that took years to resolve. McGahn eventually testified after Trump had left office.

Legal experts warn that Republicans’ roving investigation could do significant damage to criminal matters, especially if they gain access to critical prosecution files or grant immunity to witnesses who might be otherwise implicated in potential wrongdoing.

William Jeffress, a lawyer who represented Richard Nixon in a legal battle over the Watergate tapes, called a congressional committee having the authority to probe ongoing criminal investigations “unprecedented.”

Brand noted that he had raised alarms about the earlier panel’s potential impact on criminal matters.

“Now, the Republicans plan to take this one step further and actually overtly interfere … by investigating ‘open’ criminal cases,” Brand said, calling it “a dangerous further erosion in the wall between congressional oversight and law enforcement.”

Lawyers involved in the Jan. 6 committee said they anticipate House Republicans would seek to hold witnesses in contempt of Congress as a bludgeon. But DOJ has also shown over the past two years it won’t necessarily move forward on contempt changes.

Meanwhile, House Democrats are also considering which of their own members to submit for the panel. New York Rep. Jerry Nadler gets a seat as the top Democrat on Judiciary, and up to another five members would be “appointed in consultation with the Minority Leader.”

McCarthy pulled his picks from the Jan. 6 investigation after then-Speaker Nancy Pelosi rejected Jordan and Rep. Jim Banks (R-Ind.). Some Republicans later warned they viewed the step as a mistake because it left them in the dark about the select committee’s work.

Rep. Pete Aguilar (D-Calif.), who’d been a member of the Jan. 6 committee, said his party had learned it was a “mistake” for McCarthy not to seat people on that select panel.

“You’ll see, even if we disagree with the subjects and the agenda, I think you’re gonna see us engage and tell the American public exactly what Republicans would try to do behind closed doors without us,” Aguilar said.

Aguilar added that the GOP proposal to probe ongoing investigations is “incredibly scary,” and he predicted Democrats would wait to see if the resolution creating the committee would pass the House before pushing back harder.

Nadler echoed that sentiment, describing the subcommittee as designed to be a “weapon itself” and vowing Democrats would fight “tooth and nail” against it.

LLiberal News
Republicans looked like they were heading for a no-win debacle on the House floor. Instead, Kevin McCarthy got…
LLiberal News
President Joe Biden’s nominee for a top human rights position is withdrawing from contention in the face of…
LLiberal News
NEW YORK — When Long Island Republicans organized in 2021 to take back the Nassau County District Attorney’s…
LLiberal News
TALLAHASSEE, Fla. — Florida is set to become the 26th state to allow citizens to carry firearms without…
LLiberal News
Kevin McCarthy is kicking his bid for the speaker’s gavel into a historic third day after Republicans adjourned…
LLiberal News
Some commentators have recently suggested that the routine “over-classification” of information by the U.S. government contributed to the…