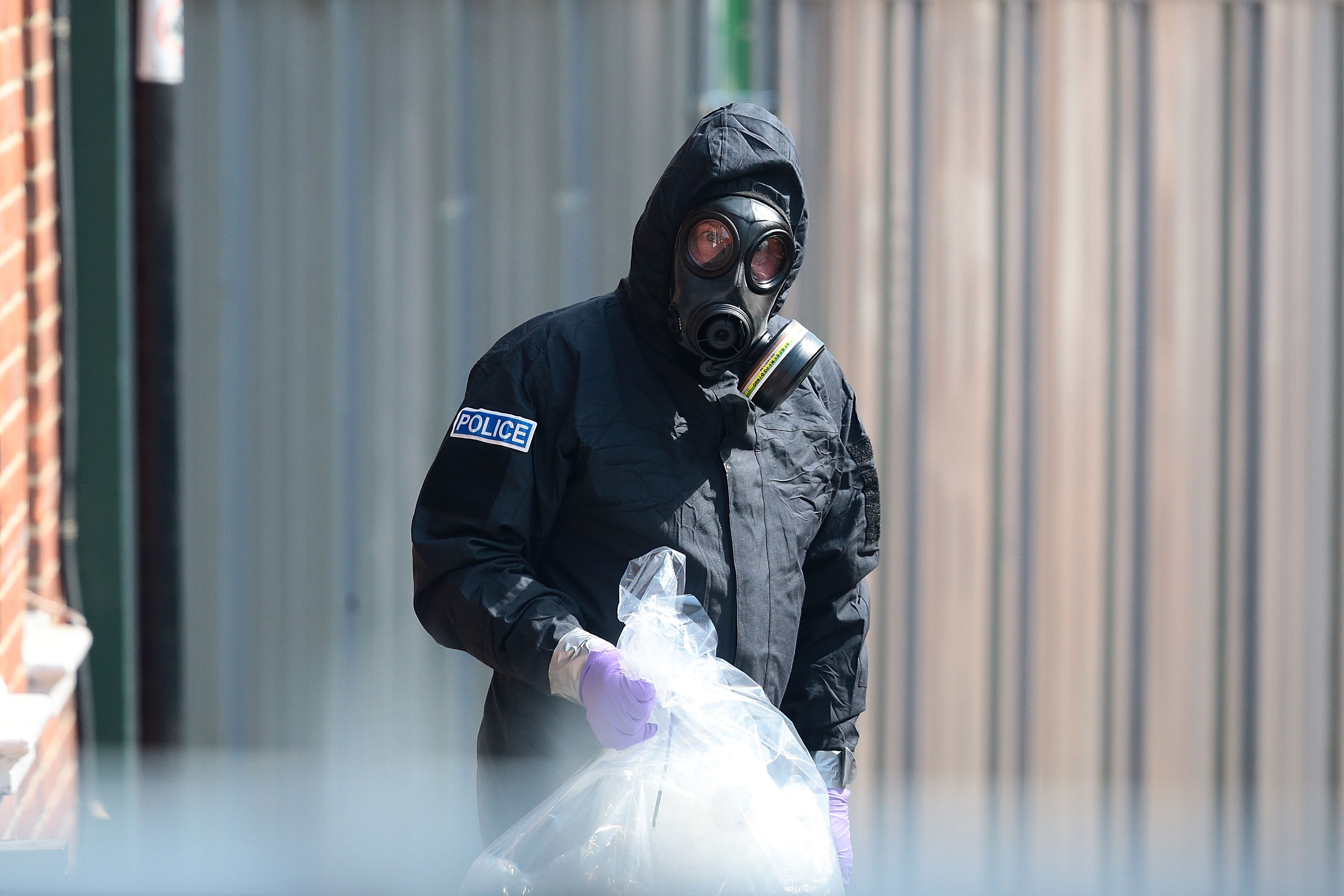 The Defense Department is overhauling its approach to countering biological and chemical weapons, as potential adversaries such as Russia and China rush to create threats that are easier to use and can evade traditional defenses.

Officials are launching a new plan to develop medical treatments, vaccines and personal protective equipment that can adapt to a range of evolving biological and chemical threats, said Ian Watson, DoD’s deputy assistant secretary for chemical and biological defense.

That’s a change for DoD, which traditionally has developed tools to counter a specific list of biological and chemical threats. Recent advances in technology allow potential adversaries to manipulate existing pathogens and toxins and create new ones, leading to an almost infinite number of new hazards for troops. Adding to the complexity of the problem, those dangers can be naturally occurring, accidental or deliberate, Watson said.

It’s no longer just the special operations forces fighting terrorists who might be exposed to chemical or biological weapons deployed by regional actors such as Iran or Syria, Watson said. Now, the problem has evolved to threaten the entire force.

U.S. officials are particularly concerned about adversaries that already have advanced chemical and biological capabilities and have proven themselves willing to use them. Russia and China now have the technology necessary both to tweak current threats — from toxins to naturally occurring pathogens — to make them more deadly and to create new weapons, Watson said.

“We see what we have to prepare for, for the National Defense Strategy, for the pacing threat of China and Russia,” Watson said. “We see not only the technology, the intel, the intent, and also the potential impact it would have to our forces if we don’t prepare.”

The move to develop tests, treatments and vaccines for a range of threats marks a shift in strategy for the department. For years, DoD responded to potential chemical and biological attacks in the field by developing tools to combat a specific list of hazards. But the list continued to grow. Now, the U.S. is adapting, Watson said, adding that it will likely become more difficult over time to determine nature and origin.

“Our ability to simply sink endless amounts of defense dollars into a single countermeasure for every single threat that can easily be modified by our adversaries is no longer a solution,” he added.

DoD is releasing the new approach ahead of its first-ever National Biodefense Strategy, which Defense Secretary Lloyd Austin called for in November 2021. The strategy was slated to come out last fall; Watson said it is expected “soon.”

Gregory Koblentz, the director of the Biodefense Graduate Program at George Mason University, said the decision by the administration to look more holistically at chemical and biological threats is a strategic national security decision — one that could help the U.S. keep pace with countries such as China, Russia and Iran.

“There’s definitely a much higher kind of salience and appreciation of how nation-states are using these technologies,” Koblentz said. “Until fairly recently, the focus has mostly been on ISIS and Al Qaeda using chemical and biological terrorism. This [strategy] might be another kind of paradigm shift.”

The change in approach has been shaped in large part by the Covid-19 pandemic, Watson said. It can be impossible to tell whether a new threat is naturally occurring or intentionally manipulated by adversaries, but either way, the countermeasures are often the same, he stressed.

DoD learned lessons from the outbreak on the aircraft carrier USS Theodore Roosevelt in March 2020, which sickened hundreds of crew members — one sailor died — and sidelined the ship in Guam for weeks. The incident had ramifications beyond the carrier: The captain was fired, the acting Navy secretary resigned, and the service was plunged into chaos.

The Roosevelt outbreak showed the importance of identifying a chemical or biological threat early to before it hits crews and affects military assets, Watson said.

“We took combat power off station because of a disease that took down the crew,” Watson said. “And so the early indications and warnings where we can actually separate and identify those things preclude us from having to go down below readiness and keep our forces not only on station, but how they’re supposed to operate.”

DoD requested an additional $300 million for fiscal 2024 to develop the new strategy and $1.2 billion over the next five years, Watson said, but more money is needed.

Watson said it is impossible for the U.S. to continue to pour millions of dollars into preparing for every known and future chemical and biological threat — it has to change course and develop a broad range of tools that will help protect troops in the field for whatever they may encounter.

“We can never ever protect the warfighter in entirety the way we’ve been doing if we don’t start switching to this in the future,” he said.

One problem is the evolving threat posed by pharmaceutical-based agents that are easy to stockpile and hide from traditional intelligence-gathering methods.

Over the past several years, China has ramped up its production of fentanyl, contributing to a global opioid crisis. And Russia has used nerve agents, namely Novichok, in assassination attempts. Experts warn that U.S. adversaries could use such pharmaceutical-based agents in large-scale attacks.

“Russia’s use of Novichok on multiple occasions has definitely highlighted the threat that so-called fourth-generation agents pose,” Koblentz said. “These are agents that we know existed, but people were not really focused on them because they were secret until recently.”

DoD has concluded that a good offense is the best defense for many pharmaceutical-based threats. Instead of developing medical countermeasures against each toxin — such as Naloxone, an auto-injector designed to treat fentanyl intoxication — officials are looking at “modulating the immune system” through six metabolic routes to improve troops’ defenses, Watson said.

The Pentagon is also targeting naturally occurring viruses, which adversaries may now be able to manipulate. For example, officials are developing monoclonal antibodies — also used to treat Covid-19 — as treatment for three viral families: Nipah/Hendra, Rift Valley Fever and Pan-Orthopox.

Officials are using advances in computing to rapidly develop new treatments. DoD has an agreement with Lawrence Livermore National Laboratory to use its El Capitan supercomputer to model new threats and generate vast numbers of potential treatments, similar to the way the U.S. responded to the Omicron variant of Covid, Watson said.

Out of those treatments, officials choose not only the most effective candidate, but also the one that can most easily be manufactured in large quantities. Once these treatments are on the shelves, they can be sent out rapidly to troops in the field in an emergency.

“You’re modeling out very much like Formula One racing. They’ll do thousands of designs in the computer,” Watson said. “What that does for us is it allows us to be cost-effective.”

As part of the new strategy, DoD is developing, standardizing and deploying biological sensors that troops can wear in the field, called “wearables,” that can detect and identify the characteristics of a threat early on, for instance, if it’s viral or bacterial. The devices use biological data such as the troops’ blood oxygen levels and heart rate to come to a diagnosis.

These devices already exist across the department; Watson’s shop is focused on standardizing them, he said.

“You can start indicating that you’re ill four or five days before, like when [you catch Covid], you can see it spike three or four days before you ever saw symptoms,” Watson said. “The more we’re using those to do the tests, the algorithms are improving, so those biomarkers are giving us better indicators.”

Another effort is wastewater surveillance, which local officials also used during the pandemic to identify Covid outbreaks quickly.

All of these pieces of the puzzle come together to help DoD better protect its forces, Watson said, likening the biodefense effort to integrated missile defense.

“Think about it like integrated missile defense, the handoff of multiple sensors, early warning to identify, you have a surveillance radar or something up there, you lock on with your fire control and you identify what it is,” Watson said. “We do integrated, layered defense not only with our medical countermeasures but also the early warning detection.”