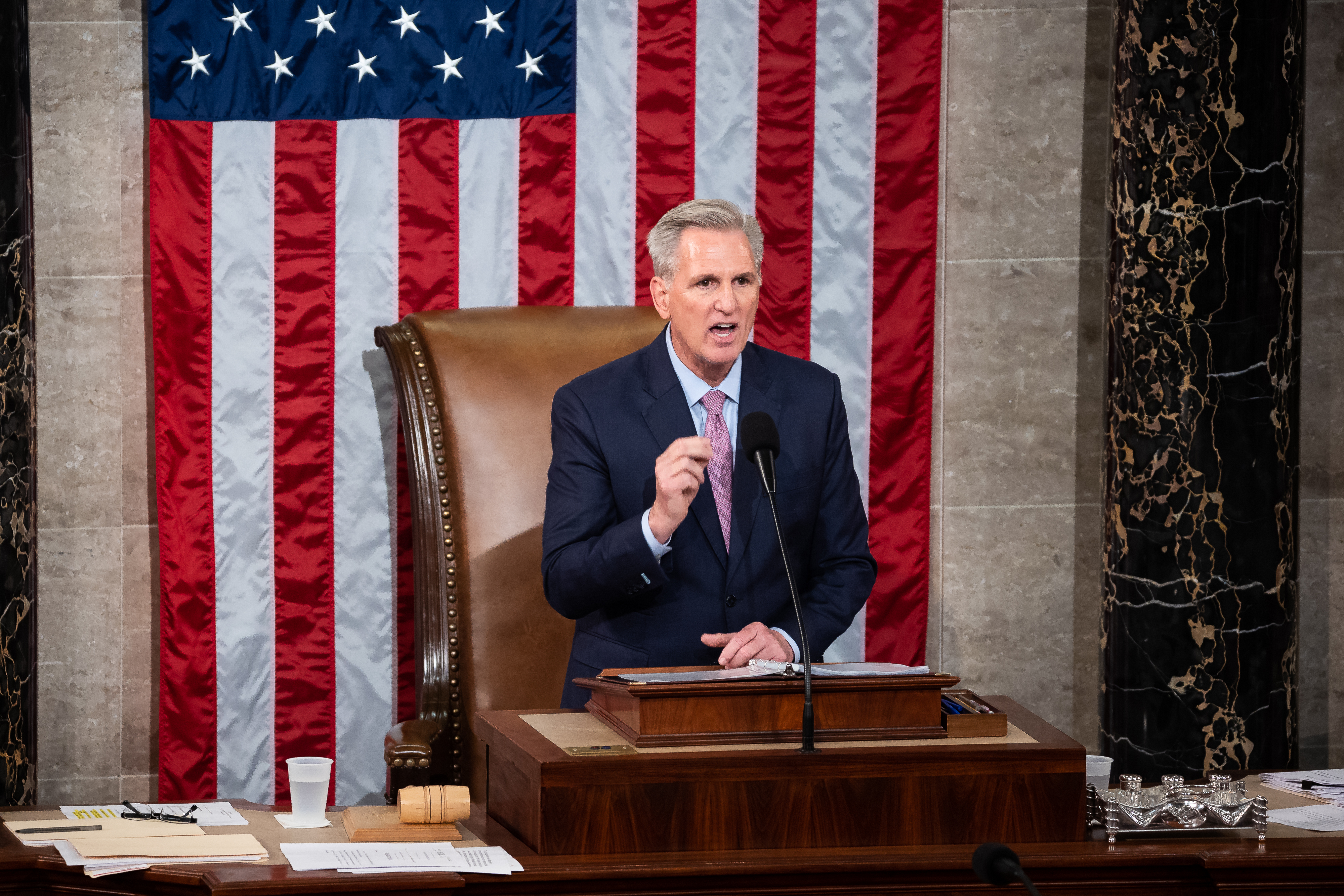 America, you’re still in danger of your own Liz Truss moment.

Of the many indignities suffered by Truss in her short stint as U.K. Prime Minister last year, one of the most memorable was a publicity stunt by the Daily Star newspaper. As her premiership hit the rocks, the tabloid set up a live video stream that showed a photograph of Truss next to a head of lettuce with two bobble eyes stuck to it. Amid turbulent markets, with the pound plunging and Conservative members of Parliament in open revolt, the chyron asked: “Will Liz Truss outlast the lettuce?” The vegetable triumphed after Truss became the shortest serving Prime Minister in British history. “Lettuce rejoice,” read the front page of the next day’s Star.

Last week, the vegetable made a stateside comeback when the attention-hungry pranksters at the Lincoln Project revived the lettuce-lawmaker stunt, this time asking if Kevin McCarthy, then the Republican House speaker hopeful, would have a longer shelf-life than the veg.

Although McCarthy finally secured the gavel on the 15th attempt in the early hours of Saturday, there are plenty of obstacles he needs to clear before he has eliminated the possibility of becoming the American Truss — a short-lived victim of today’s frenetic politics and a fractured political right that struggles to govern.

The similarities between what’s happening in the U.S. and U.K. go far beyond lettuce. From a fracas on the floor and dramatic late-night votes to fretting about what the rest of the world makes of the mess, McCarthy’s fight echoed the turbulence that has engulfed the U.K.’s House of Commons in recent years. And his travails may start to feel even more like Truss’ if a fight over the debt ceiling or a government shutdown roils markets. (Though at least McCarthy has already avoided being the shortest serving speaker in U.S. history; that honor goes to Theodore Pomeroy, who held the post for one day in 1869 in a largely ceremonial capacity before his retirement.)

The speaker of the House and prime minister may be very different roles, but they share one crucial feature: Their authority stems from the support of a majority of lawmakers. Especially under the new rules that McCarthy has agreed to, the speaker, like the prime minister, is only ever one vote away from being booted out of the job.

In this respect, McCarthy may find that there is actually more to learn from the protracted downfall of Theresa May, who spent her three years as prime minister trying — and failing — to get Parliament to green light her Brexit deal with the European Union, than from Liz Truss’ bellyflop.

Truss inherited a solid House of Commons majority but was doomed as soon as it became clear to the overwhelming majority of Conservative MPs that she would never recover from a disastrous announcement of economic and fiscal reforms that spooked markets. May’s time as prime minister, by contrast, was defined by razor-thin vote margins and a party at war with itself — a scenario that will by now feel familiar to McCarthy.

As with McCarthy and the Republicans, everything got a lot more complicated for May after an election in which her party badly underperformed expectations. In 2017, May called a general election. Her aim was to secure the mandate and majority she needed to deliver the version of Brexit she had promised. Instead, she lost her majority and was forced to negotiate a “confidence and supply” arrangement (a deal in which the junior party agrees to vote with the government on essential legislation) with Northern Ireland’s Democratic Unionist Party. Their 10 members of Parliament would give May the majority she needed to stay on as prime minister, but it was the most tenuous grip on power. The DUP could threaten to walk at any moment, while small groups of Conservative rebels could wield huge power. So while Truss faced short, sharp humiliation, May’s fate was, in some ways, more tortuous: an enervating, drawn-out realization that she could never get her Brexit deal through Parliament — and so could not go on in the job.

But numbers only tell part of the story. After all, May’s predecessor David Cameron, led a five-year-long coalition government with the Liberal Democrats after he failed to secure a majority in the 2010 election and then won outright in 2015 (before the Brexit referendum derailed his career and much more the next year).

There have been plenty of comparisons between the Republicans and the Tories in the years since the Brexit vote and Donald Trump’s first election. With Trump’s influence now waning, the Republican Party of 2023 feels a lot like the Conservatives of the Theresa May premiership. After the Brexit vote and May’s disappointing election, the Conservatives had a discredited leader and a muddled mandate. Today’s GOP looks stuck in a similarly ambiguous interregnum: rudderless and unsure of which direction to take. McCarthy lacks the credibility to stamp his own authority on the party, while its splintered factions are eager to throw their weight around.

One difference between McCarthy and May is the stakes: May had a daunting and vital task — negotiating Brexit with the EU and getting a majority of MPs on board. For House Republicans, things are a little less make or break. With the Democrats in control of the Senate and the White House, expectations for McCarthy to implement the GOP agenda are far lower, though he will still have to steer the usual must-pass legislation through the House. The high stakes worked to May’s advantage, allowing her to turn the screws on rebels — albeit not enough to pass her Brexit deal. McCarthy, by contrast, may be about to experience a version of Henry Kissinger’s famous line about university politics: that it gets so vicious because the stakes are so low.

This Congress promises to give Americans a messy lesson in parliamentary politics. And if it is anything like the recent history of the House of Commons, it’ll be a bumpy ride for leadership — even if McCarthy lasts longer than a head of lettuce.

LLiberal News
“I’m glad to see the committee will look into the Ticketmaster debacle,” Lindsey Graham said.
LLiberal News
Officials from the Justice Department recovered additional classified items Friday after searching the Wilmington, Del., home of President…
LLiberal News
Richard Barnett, who famously put his feet up on a desk in Speaker Nancy Pelosi’s office as rioters…
LLiberal News
The FDA’s expert panel on vaccines voted Thursday to recommend that anyone who gets a Covid vaccine going…
LLiberal News
Republicans on Sunday defended their contentious process in choosing a House speaker as an example of democracy in…
LLiberal News
Red states, blue states, big cities, small towns — mayors from across the country this week are venting…