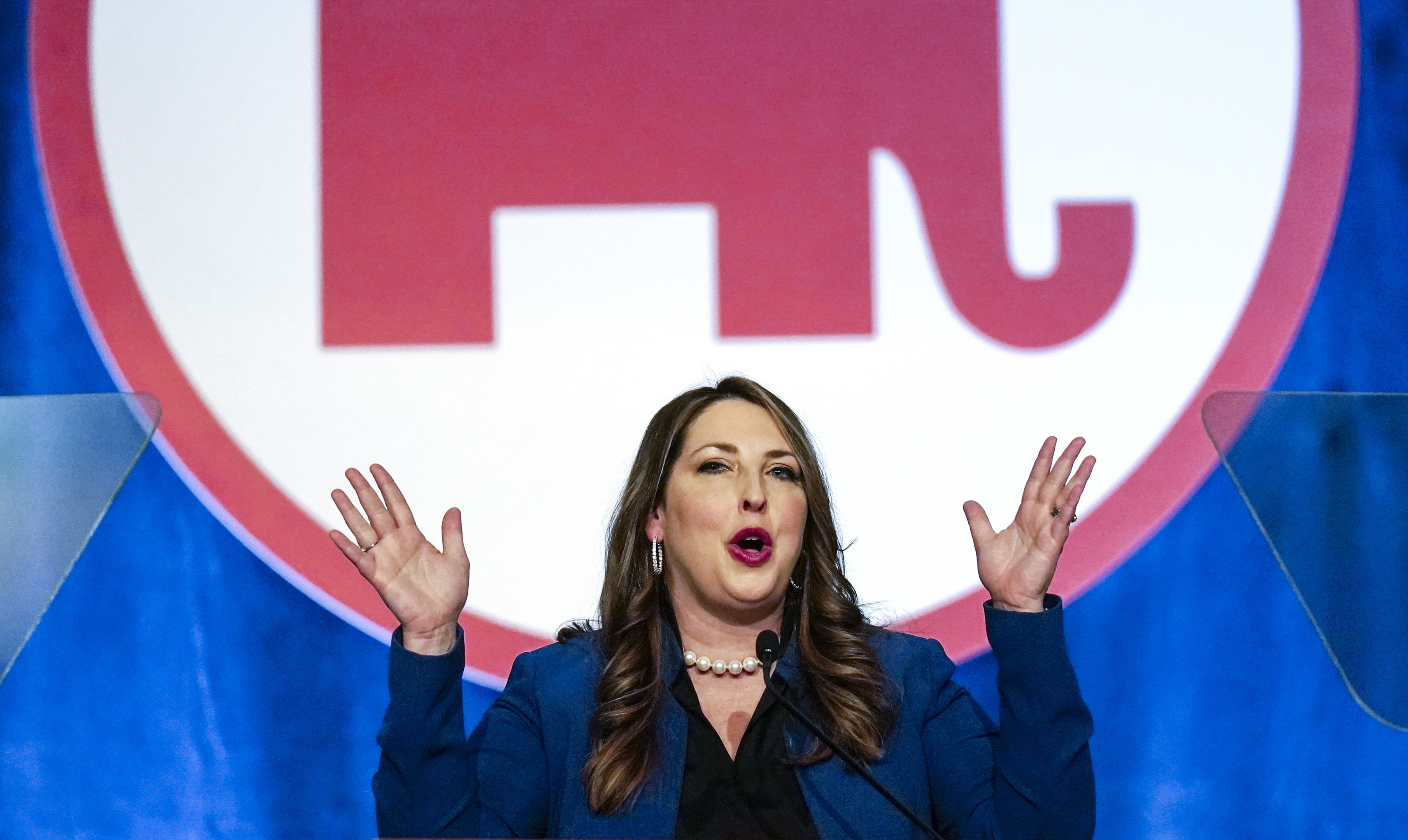 With the Republican National Committee elections approaching, current Chair Ronna McDaniel is resisting calls to participate in a public debate with her main rivals.

Two conservative media entities, the John Fredericks Media Network and Real America’s Voice, are set to host a candidate forum on Jan. 25 live from the Dana Point, Calif., resort where RNC members will gather to elect their next chair. Both Harmeet Dhillon, the RNC committeewoman from California, and MyPillow CEO Mike Lindell, will be participating.

But McDaniel, who is seeking a fourth term in the role, has declined to attend, citing her existing commitment to a forum being held for RNC members only. Fredericks and other commentators on Real America’s Voice have been outspoken in their opposition to McDaniel.

“The RNC is already hosting a candidate forum and Ronna has committed to participating in that,” said Emma Vaughn, spokesperson for McDaniel’s reelection campaign. “As head of the RNC, Chairwoman McDaniel will be overseeing party business during the remaining portion of the RNC meeting.”

Dhillon, whose camp confirmed her participation in the Fredericks and Real America’s Voice forum, has repeatedly called for a public debate with McDaniel, saying it’s crucial for the candidates to make their case to grassroots conservatives rather than conduct business strictly among the RNC’s 168 voting members.

The RNC announced earlier this week it will hold two closed-door forums for candidates seeking committee leadership posts, open only to committee members and their proxies attending the organization’s winter meeting. It’s a departure from the last contentious chairman’s race in 2011, when all candidates, including incumbent Chair Michael Steele, participated in a publicly aired debate.

The winter meeting features a packed schedule for RNC members. During the same time on Wednesday afternoon when the Fredericks and Real America’s Voice debate is set to air, the RNC has already scheduled sessions for state chairs, its election integrity committee and a group overseeing its “after action” election report.

Virginia GOP Chair Rich Anderson is listed as moderator for the Fredericks and Real America’s Voice forum on an invitation emailed Wednesday to representatives of McDaniel, Dhillon and Lindell — though he told POLITICO that organizers were still working out the details. Anderson said he would be a neutral third-party host because he remains “totally uncommitted right now” to any of the candidates in the race.

But anti-McDaniel sentiment, supercharged by several Fox News hosts supporting Dhillon, has spread to conservative activists around the country who have inundated RNC members with calls and emails demanding McDaniel’s ouster after a disappointing midterm election for Republicans. McDaniel, picked by Donald Trump in 2017 to chair the national party, is believed to have support from the majority of the 168 RNC voting members, making the challenge by Dhillon a long shot.

“This election has to involve the very workers, the party apparatus, the grassroots, the populist movement that put the 168 in there,” Fredericks said. “The elitism that is going on here for a party of the people is shameful.”

Anti-McDaniel conservatives weren’t the only ones pushing for a public debate in the race for chair.

Sean Spicer, former Trump White House press secretary, also reached out to McDaniel’s and Dhillon’s team about moderating a televised forum on Newsmax, the conservative cable company where he hosts a show.

Spicer, who has not publicly taken sides in the RNC chair race, said he didn’t receive commitments from the candidates in time to schedule a debate before he leaves Saturday for U.S. Navy Reserve duty.

As an RNC employee from 2011 to 2017, Spicer said the candidates for chair should all take part in a public forum.

“I believe it’s a good idea that the party faithful and the grassroots and the activists see a plan and a vision from whomever is running for chair,” Spicer said. “I think Ronna’s got a good case to make, and she should go out and make it to the faithful, the grassroots, the donors.”

The candidates have taken part in individual interviews on conservative radio and television platforms, but have yet to hash it out directly.

Hosted by Americans for Tax Reform, that January 2011 forum was moderated by Grover Norquist and Tucker Carlson at the National Press Club a week and a half before RNC members voted on a new chair. ATR also hosted a public debate in the 2009 RNC leadership race.

LLiberal News
MADISON, Wis. — Women’s marches demanding abortion rights drew thousands of people across the country on Sunday, the…
LLiberal News
A District of Columbia court resisted efforts on Tuesday to draw it into a bitter legal fight between…
LLiberal News
Mike Pence’s political operation has poached a top adviser to Nikki Haley as the two jostle for a…
LLiberal News
NEW YORK — Colorado Governor Jared Polis announced over the weekend his state would no longer charter buses…
LLiberal News
When a motley crew of about a dozen House Republicans huddled in a first-floor Capitol suite three ballots…
LLiberal News
The U.S. is gearing up to announce a major new weapons package for Ukraine on Friday, as top…