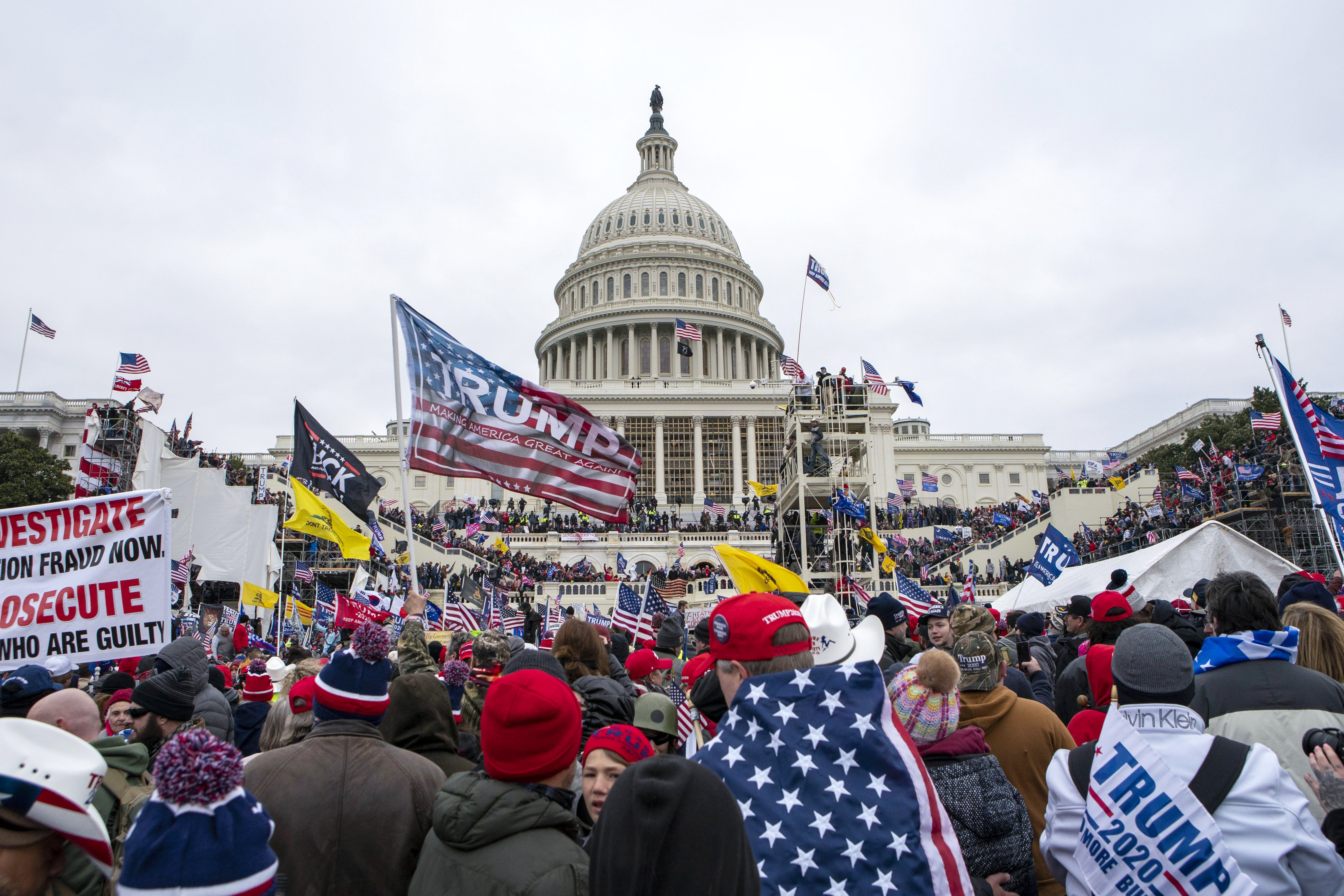 While rioters attacked the Capitol on Jan. 6, Emily Berret was hunkered down with Speaker Nancy Pelosi at Fort McNair when an image popped on the TV screen that stopped her in her tracks.

It was a picture of a man inside Pelosi’s office suite with his feet up on a desk, with a bloody flag draped on the bureau behind him and a taser protruding from his waistband. It’s become one of the most famous images of the Jan. 6 riot — Arkansas’ Richard “Bigo” Barnett with his feet propped up, while a handful of Pelosi staffers sheltered secretly in a nearby conference room.

It was the first indication for many that Pelosi’s office had been breached, and it was a symbol of the brazenness and hubris demonstrated by many who stormed inside that day to stop the peaceful transfer of power.

But for Berret the image meant something more: It was her desk.

“I took a moment because I panicked,” Beret recalled Tuesday on the witness stand in the U.S. District Court of Washington D.C., where she was the first witness in Barnett’s trial on eight charges stemming from his role in the attack — including obstructing Congress’ proceeding and assaulting or impeding federal officers.

More than two years after the attack, the trials of individual defendants are still bringing to light new details about what occurred inside the building. Berret, a deputy chief of staff who essentially served as Pelosi’s shadow, recalled her conversations with the speaker’s Capitol Police detail as they began to grow more anxious about the violence unfolding outside the building. As Berret met with fellow aides and lawmakers on the House floor, she recalled one sergeant telling her to prepare for a possible evacuation.

“Next time you see the whites of my eyes, take the speaker down,” Berret recalled him saying to her while she was on the floor of the House, meaning to begin the evacuation.

Next time she saw him, Berret said she called the remaining staff in the speaker’s office suite and told them to take shelter in a recessed conference room that the staff considered a “safe room,” and to barricade the doors. Meanwhile, Berret, Pelosi, Pelosi’s chief of staff Terry McCullough and Pelosi’s daughter Alexandra fled the Capitol with her security detail and into a waiting vehicle.

“We started running,” she recalled.

What happened next was an extraordinary story of the makeshift efforts to keep the government functioning that has been told in bits and pieces since Jan. 6.

Pelosi realized that she had left her phone on the rostrum of the House chamber, Berret said. So, Berret, who had her work phone with her, was the only one with access to many of Pelosi’s key contacts.

“I was the lifeline,” she said. “My phone became the operations center.”

Pelosi used Berret’s phone to contact Vice President Mike Pence, as well as state and federal officials, she recalled. Though she couldn’t arrange the calls herself, she said aides on Senate Majority Leader Chuck Schumer’s staff (who were working remotely that day) offered to help her set up high-level contacts for Pelosi.

Amid the chaos, things took another troubling twist. She received a text message from “a lovely man in Canada” who informed her that her work cell phone number was visible in the photos of her office that had been circulating thanks to Barnett. She began receiving random unwanted calls on the very phone that had been serving as Pelosi’s line to top government officials.

The images of Barnett also revealed that she had left her personal cell phone on her desk  — some of the images showed the phone lit up, which she said indicated to her that she had been receiving text messages. And her purse, she noted, with all of her credit cards, was just out of camera shot behind her chair.

Prosecutors asked Berret — who is now the head of new Democratic leader Hakeem Jeffries’ transition team — to walk through other significant details about Barnett’s trip through the office suite, including the documents and files that were strewn as Pelosi’s staff — already shorthanded due to Covid — were helping the speaker prepare for the Jan. 6 session of Congress and the upcoming inauguration of Joe Biden.

The desk had documents with phone numbers and details about conversations Pelosi had with world leaders and a list of people who had been granted passes to sit in the House gallery that day. A nearby cabinet had some of Pelosi’s personal files. On a bureau behind Barnett, where his bloodied flag was resting, sat a framed picture that had been a gift to Pelosi from late Rep. John Lewis (D-Ga.).

Meanwhile, Berret said she had been exchanging text messages with staffers trapped in lockdown in the speaker’s conference room, just one wall away from rioters who had broken in. They had taken shelter under a table and turned out the lights.

It was a “bleak situation,” Berret recalled, saying she had received repeated updates from Capitol Police who said they couldn’t access the conference room safely. But she didn’t want to convey that harrowing news to the staffers who were sheltering.

Eventually, as rioters were cleared from Pelosi’s suite, the staffers were freed and ushered to a safe location.

Details of that trip were recounted in a different trial — of Oath Keepers founder Stewart Rhodes and four allies — when David Lazarus, the head of Pelosi’s security detail, described his own efforts to free Pelosi’s staff from the conference room.

“I’m in tunnel vision. I just want to get into the office,” Lazarus told jurors in that trial, describing his approach to Pelosi’s suite.

And late last year, Pelosi aide Jamie Fleet recounted his experience on the House floor and in hiding from the mob, when he testified at the trial of Riley Williams, a Pennsylvania woman who breached the speaker’s suite during the chaos. He recalled gazing out at the mob approaching the Capitol and observing clashes with police just before the building was breached.

LLiberal News
The U.S. is considering sending Stryker armored combat vehicles to Ukraine in an upcoming aid package to help…
LLiberal News
Top U.S. officials are increasingly tracking the movements and efforts of a Russian private military group outside of…
LLiberal News
Ordinary Americans will soon be able to directly sponsor refugees entering the U.S. through a new policy, the…
LLiberal News
NEW YORK — Mayor Eric Adams, a retired police captain who’s made public safety the cornerstone of his…
LLiberal News
Former President Donald Trump is unveiling a 2024 education policy plan, one focusing heavily on the culture war…
LLiberal News
The quick thinking of Capitol Police officer Eugene Goodman may have prevented a shootout at the doors of…