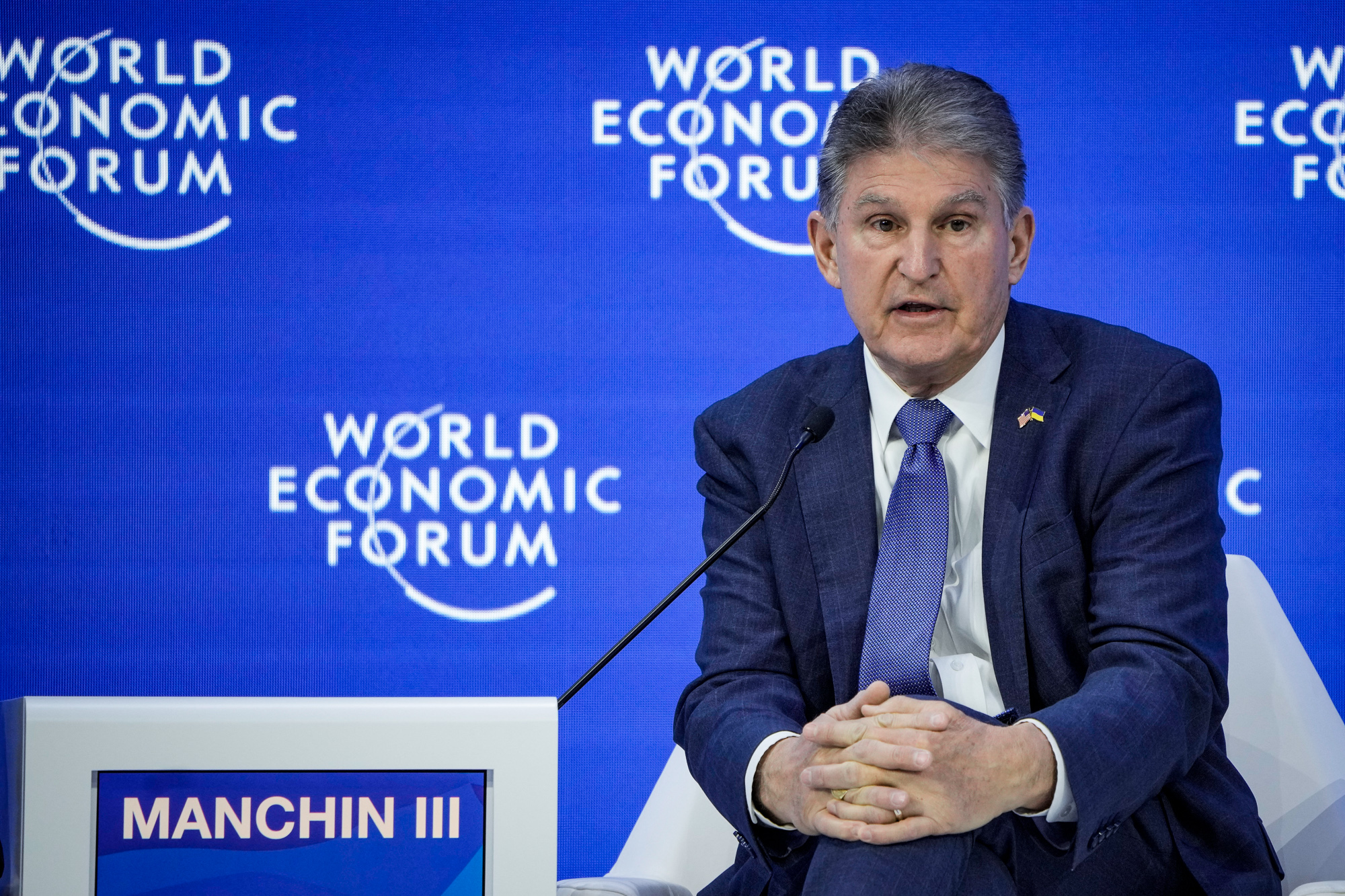 On the eve of a state dinner at the White House, Macron confronted Sen. Joe Manchin, the West Virginia Democrat, with a blunt accusation.

“You’re hurting my country,” Macron told Manchin, the senator recounted in an interview with POLITICO.

It was a charge that captured the wounded feelings and political frustrations of America’s allies in Europe after the passage of the Inflation Reduction Act, H.R. 5376 (117), which included a mammoth program of clean-energy subsidies and made-in-America manufacturing rules that has thrown the transatlantic economic relationship into turmoil. Manchin, as the crucial fiftieth vote for the legislation and whose office wrote the controversial provisions, did more to shape the final version of the law than any legislator.

Now, Manchin has marched into the den of the European elite, mingling at the World Economic Forum in Davos with an audience of continental technocrats, true-believing free traders and oligarchs more at ease in Monte Carlo than Morgantown, West Virginia, where Manchin played college football.

The gulf in political and cultural sensibilities could scarcely have been starker.

In the Swiss Alps, Manchin was determined to change the minds of men and women who see him as the face of a new American rival, the cause of a great rupture in transatlantic economic relations. Now, having made the trip across the Atlantic, he’s trying to put the pieces back together. He has been in one mode and one mode only here: sell, baby, sell.

Manchin is unabashedly proud of his role in shaping the IRA, handing out one-pagers and telling stories about the people — some of them at Davos — who are already benefiting from it. But American allies like France and Germany see the $369 billion investment in energy security, including subsidies for climate and tech companies and incentives for consumers, as a frontal assault on European industry, a blunt-force instrument aimed at coercing companies to shift investments out of Europe and perhaps enter into energy and manufacturing deals in North America that they would not otherwise pursue.

A new man about town

In Washington, Manchin is among the most famous members of Congress. But now, the once-unknown, gum-chewing, no-nonsense West Virginian is infamous in Europe. European leaders, typically used to dealing with fellow heads of state, are now seeking facetime with the newfound Davos Man himself. They are getting plenty of it.

Strolling into Anthony Scaramucci’s wine-tasting party in the Piano Bar of Hotel Europe on Tuesday night, Manchin had earlier that day come out of another grilling from a group of Europeans. He seemed more bemused than upset by the experience. He said he explained that the IRA is good for the U.S. and for the European allies.

Did he convince anyone?

Not really, he said, but he made his case.

Manchin pushed back, saying there’s nothing stopping Germany from producing more cars in the United States — a point that wasn’t exactly a response to Scholz’s frustration.

“I think it rubs him wrong when I say that,” the senator told POLITICO.

Manchin said that Scholz countered that the U.S. places too many penalties on European cars entering the American market. So the West Virginian pulled out his cellphone and Googled “tariff cost on autos in Germany.” In bold, the search engine’s front page excerpted the relevant part of a2019 Deutsche Welle article: “US levies a 2.5 percent tariff on European auto imports, while the European Union imposes a 10 percent duty.”

A German government spokesman called Scholz’s conversation with Manchin and the other 11 lawmakers on the IRA a “direct exchange” that was “an expression of our close and good relationship with the USA.”

Still, Manchin says his main message to Scholz — and Europe more broadly — is that “this piece of legislation was not intended to harm anybody. It was intended to keep America strong so we could help our friends. That’s it.”

Sen. Chris Coons (D-Del.), the leader of the American congressional delegation in Davos, said the conversation with Scholz on the IRA was cordial and professional. But Coons, an experienced diplomat who sits on the Senate’s foreign relations committee, acknowledged there were clear differences.

“We are optimistic we can find a way forward through this,” he said. “We have work to do to hear each other.”

Nobody likes being the last to know

Manchin is proud that he was able to have frank conversations with allies about a disagreement, having them learn from him and him learn from them. But he was surprised by the rancor and confusion he encountered from European officials who felt blindsided by America’s robust industrial policy.

Manchin never heard from lobbies or governments about the controversial part of the law because his team drafted it in secret. No one, save for senior Democrats in the Senate, knew they were drafting the measure. Once it came to light, and proved the saving grace for President Joe Biden’s climate agenda, the legislative process moved so quickly that no one had time to react.

“They just didn’t know,” Manchin said — but they know now.

The initial confusion about the law in Europe gave way to rage and, soon after that, an aggressive policy response from EU and national leaders who are crafting their own program of large-scale support for clean-energy industry.

The night the IRA passed last year, Ursula von der Leyen, the European Commission’s president, issued a late-night tweet to congratulate Biden on the IRA’s passage in Congress. A few weeks later, her team was openly panicking about the IRA’s measures, particularly regarding subsidies on electric vehicles which it regarded as discriminatory.

By the winter, when Macron clashed with Manchin in Washington, European leaders grasped that the American energy law could have sweeping unintended consequences for their own countries. Manchin said that when Macron approached him, the French leader decried the investments that were leaving other parts of the world — including Europe — and flooding into the United States.

According to Manchin’s recollection, he countered by telling Macron that the U.S. took the approach to incentivize its way to energy security while France and Europeans chose to tax their way to it. The American approach “attracts people from all over the world” to work on hydrogen, small nuclear reactors and battery storage, Manchin recalled saying.

He said he told Macron: “I will sit down and work with you in any way, shape or form to relieve your concerns and fears that we’re trying to basically do any harm to you or your society.”

A French official with direct knowledge of the exchange confirmed it, noting the president “explained very calmly our serious concerns.”

Sticking to his guns

Worries have continued mounting in Europe, and Manchin has not always worked hard to ease them.

At a dinner Manchin and his congressional colleagues had with Xavier Bettel, Luxembourg’s prime minister, at Davos this week, the leader raised Europe’s concerns about the IRA, particularly in light of the spiking cost of energy due to Russia’s war in Ukraine, a person familiar with the conversation said.Manchin argued that Luxembourg would see those prices fall if the country entered into long-term contracts with U.S.-based producers.

Those kinds of comments are likely to alienate the EU even further, confirming the view in Brussels that American natural gas producers are poised to benefit from EU’s energy woes as the bloc tries to wean off Russian energy.

Asked about the dinner with lawmakers, Bettel said “Luxembourg remains committed to keep up the dialogue with our U.S. friends around European concerns including IRA and energy security,” adding his country informed the European Commission about the dialogue he had with Manchin and others.

Manchin was not the only American struck by the intensity of European leaders’ resentment over the legislation, which some suggested was misplaced.

“Over the last couple of decades our friends in Europe have encouraged the United States to address climate change, and now we’re doing it in a major way and some are criticizing the way we’re doing it,” said Rep. Brendan Boyle (D-Pa.), chair of the EU Caucus on Capitol Hill who is part of the U.S. delegation in Davos. 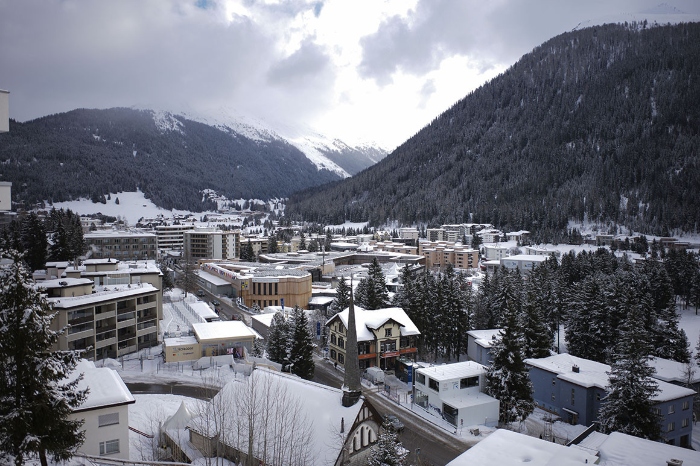 “This bill took a year and a half,” said Boyle. “I’m chair of the congressional EU caucus; pretty much every week I am meeting with fellow parliamentarians and EU countries. Not once — ever — was it expressed to me by any European official of any country that they had problems or concerns with any specific aspect of the Inflation Reduction Act that were being discussed publicly.”

But European officials say they were annoyed to have learned about it first in the media. After all, the U.S. and the EU had just barely over a year before set up a new body — called the Trade and Technology Council – for the express purpose of coordinating on such policies.

EU officials are now scrambling to find some way out of the conundrum inflicted on them by the IRA, particularly the bill’s provisions on electric vehicles, which gave favorable treatment to Mexico and Canada, but not the EU. A leader of an EU country, who didn’t want to be named, said this week that, “We are confident that by raising it we can make sure the U.S. does the right thing.”

The European Commission established a “task-force” in October led by Von der Leyen’s chief of staff Bjoern Seibert and deputy national security adviser Mike Pyle to explore options. In particular, they are trying to ensure that the local provisions part of the law which allows manufacturers from Mexico and Canada to benefit from tax breaks, could also apply to Europe.

But there isn’t great hope in Europe at this point that the United States will fundamentally change the offending provisions of the IRA. U.S. Trade Representative Katherine Tai said following a meeting with Commissioner Valdis Dombrovskis in Brussels this week that the EU needed to be “realistic” about resolving concerns.

Manchin said he is open to addressing any suggestions the Europeans may have, working with them closely to ensure there isn’t a brutal fight to win the technological race toward a new energy economy.

It’s unclear how much power he’ll have now that Democrats have a 51-member majority in the Senate, rather than the 50-50 split that regularly gave Manchin the swing vote. And with Republicans in control of the House of Representatives, the prospects look dim for major legislation on complex subjects.

For now, Manchin is looking forward to resting on his flight home and shifting out of sales mode — at least for now.

“I didn’t know it would be this intense, to be honest with you,” he said.