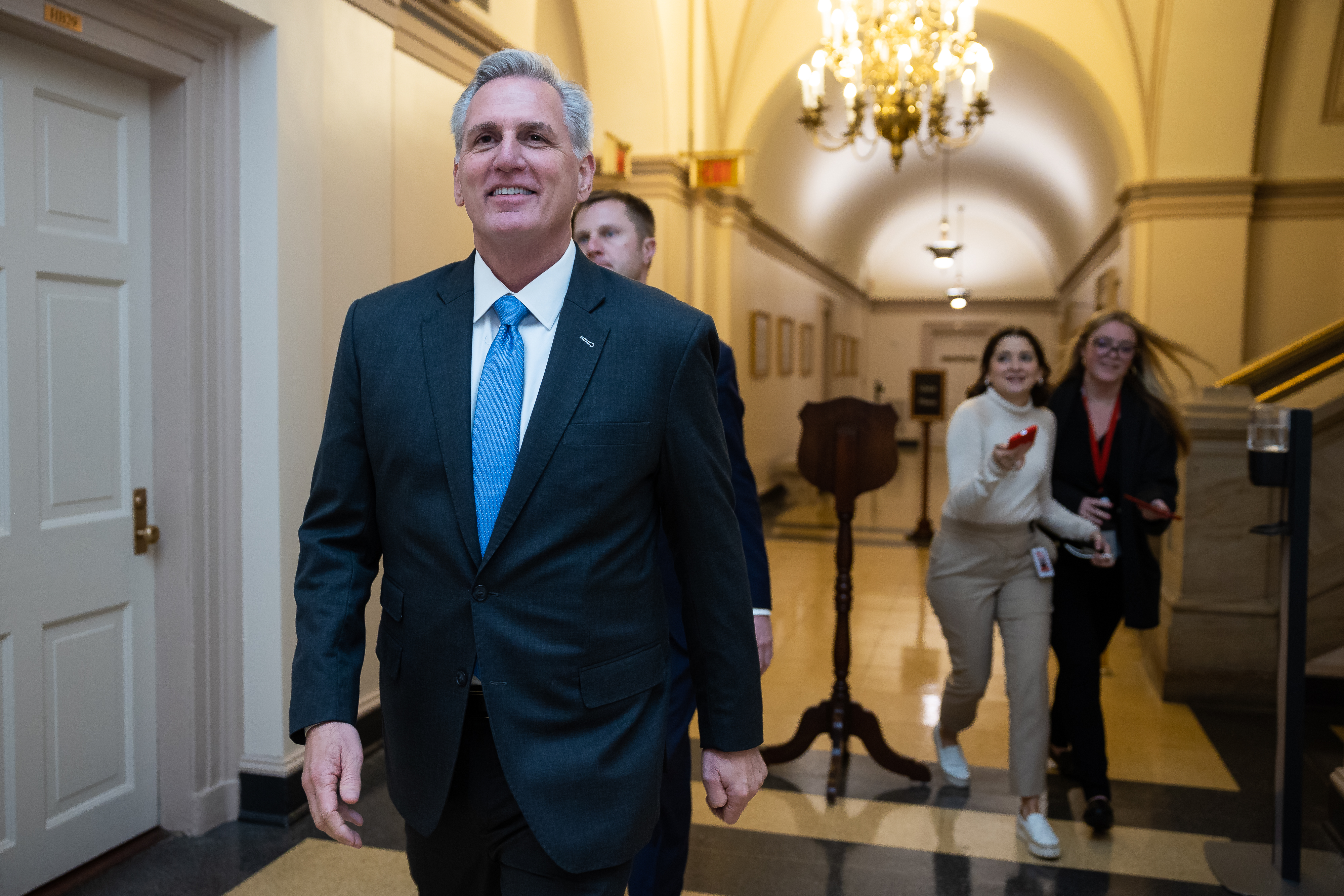 Republicans are confronting a strategic dilemma as they prepare to unleash their new investigative powers on the Biden White House: Should they take a page from the Democrat-run Jan. 6 select committee?

GOP lawmakers spent the last 18 months decrying the Capitol riot panel as an illegitimate abuse of Congress’ investigative powers. House Republicans’ complaints ran the gamut, from the Jan. 6 committee’s wide-ranging use of subpoenas to its reliance on the Justice Department for criminal contempt charges against defiant witnesses to its demands that telecom companies turn over phone records.

Despite the GOP laments, judges repeatedly backed the committee’s efforts — culminating in a Supreme Court victory that let Jan. 6 investigators delve into Donald Trump’s most closely held West Wing secrets. And as much as they abhorred the circumstances of the select panel’s creation, Republicans now leading the House’s powerful investigative committees took notice of the headway it made.

“They’ve almost changed the rules,” House Oversight Chair James Comer (R-Ky.) told POLITICO. “[Are] we going to continue that pattern? Look, we want to get as much information as we can get, and they’ve written a new playbook, so we’ll have to talk about it as a committee and as a conference.”

Republican leaders are already navigating intra-party tensions over which tactics to embrace. They are under fierce pressure from their right flank and the party’s base to go scorched-earth against the Biden administration — with some already agitating for impeachments. But centrists and institutional-minded Republicans, fresh off the sting of a disappointing midterm, are warning that carbon-copying Democrats isn’t the way to go.

“I think mostly what the Democrats did as precedent is weaken Congress … I don’t think they did a very good job,” said Rep. Kelly Armstrong (R-N.D.), who is joining the Oversight Committee. “If we get into a tit for tat — I don’t think that will serve Republicans, Congress or the American people well.”

In some ways, it’s a challenge Congress faces every time the House changes hands. Lawmakers intensely rely on precedent, taking inspiration from their predecessors regardless of party or even if they previously railed against it. To Hill veterans, it’s almost a cliche: when one Congress deploys an oversight tactic, it becomes part of the toolbox for every subsequent Congress — particularly if it is tested and approved by federal courts in D.C.

“Turnabout is fair play, and they were warned this at the time — on everything from kicking members off committees … two impeachment efforts, everything else,” Rep. Tom Cole (R-Okla.) said about the possibility that Republicans use Democrats’ tactics against them.

Democrats acknowledge that they approached, and even expanded, the outer limits of Congress’ investigative powers. But they say investigating an attempt by Trump and his allies to derail the transfer of presidential power, and the violent attack on the Capitol that followed, called for them to push the boundaries.

Doug Letter, the top lawyer for the House under former Speaker Nancy Pelosi and an architect of the legal battles to empower the Jan. 6 select committee, defended the panel’s investigative tactics that lawmakers had previously used only sparingly.

“It’s hard to think of a whole lot of congressional investigations that are going to be like the January 6th one, that are going to need that kind of stuff,” Letter said in an interview, pointing specifically to the panel’s voluminous subpoenas for phone records from third-party carriers like Verizon and T-Mobile.

But he also said that he anticipated Republicans would seek to deploy their own battery of oversight tools, some likely aided by the battles Letter himself won on behalf of the Democratic House.

“We obviously live in a democracy,” Letter said. “Those are the people in power.”

In court filings, Letter emphasized Congress’ broad ability to conduct investigations into matters of national significance. He frequently defended the panel against dozens of lawsuits brought by figures like former White House chief of staff Mark Meadows, the Republican National Committee and Trump himself.

Time and again, judges agreed that the panel was operating properly on matters of grave national significance.

That included last year, when then-Minority Leader Kevin McCarthy (R-Calif.) unsuccessfully argued in an amicus brief for Trump ally Steve Bannon that the committee shouldn’t be granted certain powers as he had not appointed any members to it — a result of McCarthy’s decision to boycott the panel after Pelosi tossed some of his original picks.

A House Democratic aide, granted anonymity to speak candidly, predicted Republicans will use some tactics against them but warned the “flip side is true as well.”

“Republicans set the playbook, and Trump set the playbook, for how to defend against some of this, get it in court and tie it up. … That sword cuts both ways from them. I’ve been around the Hill long enough to know what goes around comes around,” the aide added.

So far, Republicans have embraced two plays Democrats used: First, McCarthy is vowing to prevent Reps. Adam Schiff (D-Calif.) and Eric Swalwell (D-Calif.) from getting Intelligence Committee seats, something he can do unilaterally as speaker due to the nature of that panel. He’s also promised to keep Rep. Ilhan Omar (D-Minn.) from getting a Foreign Affairs Committee seat, which will likely spark a House floor showdown.

Secondly, Republicans green-lit a sprawling select subcommittee that will probe the “weaponization” of the federal government, including current federal investigations, the Justice Department, the FBI and the intelligence community. The controversial panel, a demand by some of McCarthy’s hardline detractors during the 15-ballot speakership fight, will be under the stewardship of Judiciary Committee Chair Jim Jordan (R-Ohio).

McCarthy, for now, says Democrats will get to pick their members for that panel. Under the rules for the “weaponization” panel, Jordan and New York Rep. Jerry Nadler — the top Democrat on Judiciary — automatically get seats. Then of the 13 additional members McCarthy names, five are in consultation with House Minority Leader Hakeem Jeffries (D-N.Y.).

“The other side will get to name their members on the committee. It won’t be handpicked by me and denying the Democrats their voice,” McCarthy has told reporters.

Another area to watch will be how Republicans use their subpoena power, both in compelling witnesses and obtaining records from third parties.

Comer noted that he thought Democrats have “set a lot of precedents,” pointing to both their use of subpoenas and their use of contempt of Congress.

While Democrats focused on phone records, Comer has his own target: bank records, which he noted it’s “very likely” he will need to subpoena. He’s already re-upped his request to Treasury Secretary Janet Yellen for so-called suspicious activity reports tied to the president’s son, Hunter, and a network of associates. The financial reports, filed routinely by banks, often don’t indicate wrongdoing but can be a basis for further investigation.

“We want specific [financial] transactions,” Comer said. “I don’t want this thing to keep growing and growing and they never end.”

LLiberal News
The Senate starts its work in earnest this week, and things may look a lot different at the…
LLiberal News
“We want to become a member of NATO because we don’t ever again want war in Finland,” says…
LLiberal News
The world ‘cannot afford to be complacent,’ warns the head of Gavi, the Vaccine Alliance.
LLiberal News
America may not want a Trump-Biden rematch, but Donald Trump and Joe Biden sure do. A CNN poll…
LLiberal News
They’re two of the most iconic images from the riot at the Capitol following the 2020 presidential election:…
LLiberal News
MEMPHIS, Tenn. — The Memphis police chief on Saturday disbanded the city’s so-called Scorpion unit after some of…