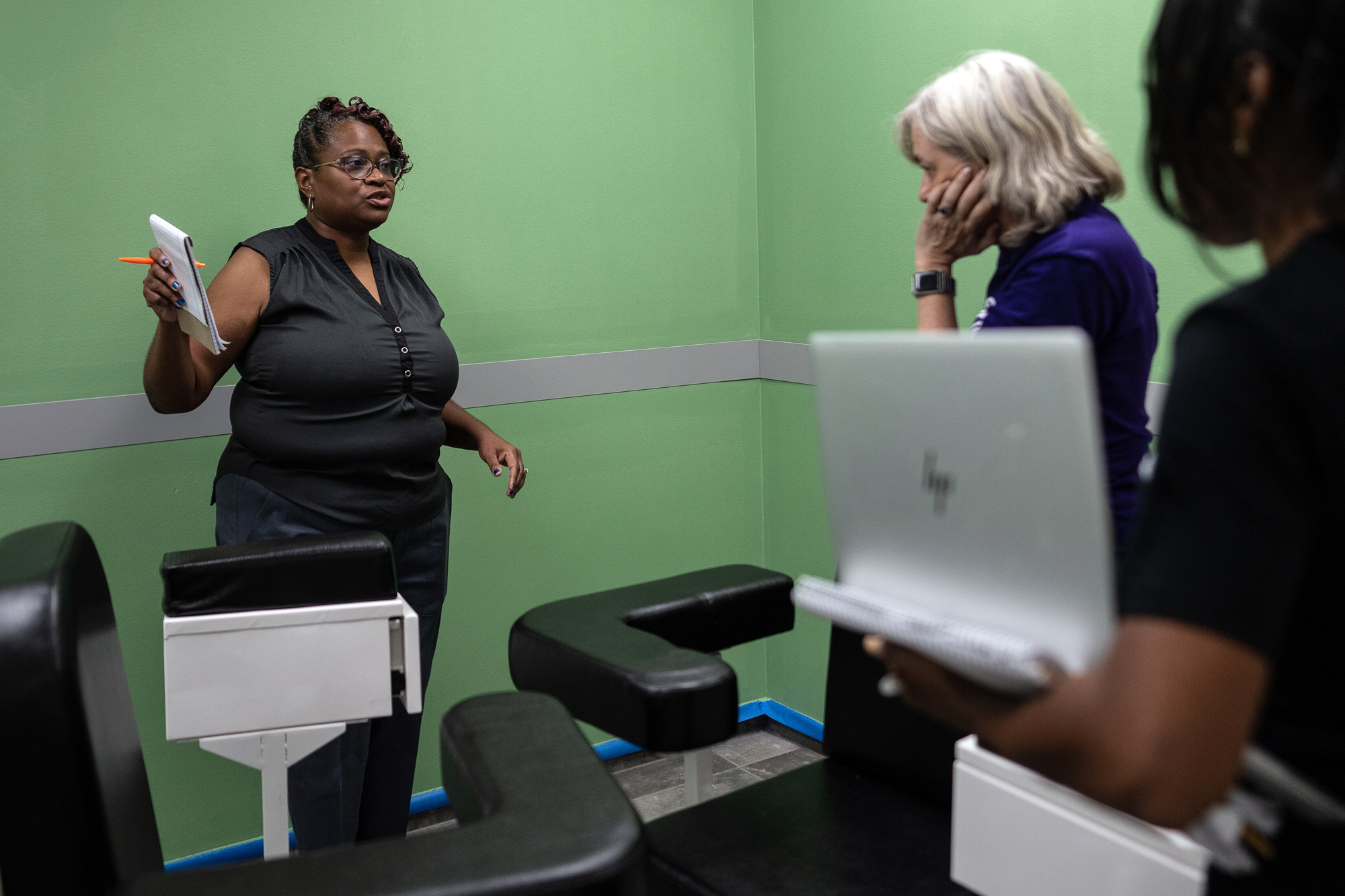 A Tennessee-based health care provider announced plans in May — just one week after POLITICO published the draft Supreme Court opinion that foreshadowed the end of federal abortion protections — to open a clinic in Carbondale, Ill.

The provider, Choices, is seeing a steady stream of abortion patients from Arkansas, Tennessee, Mississippi and Texas since it set up space in a shuttered dermatology office last fall, its only location outside Memphis.

For Carbondale, a college town of 22,000 people, geography had a lot to do with Choices’ new site: Illinois is bordered by five states that all have abortion laws more restrictive than its own, turning the Democratic-controlled state into a destination for those seeking the procedure since Roe v. Wade fell in June.

Carbondale is just one of many blue-state towns near red-state borders that some abortion rights supporters didn’t believe could sustain a clinic long-term if Roe werestill standing. Now — with Choices and Alamo Women’s Reproductive Services — it has two, and more could follow. And with the influx of patients has come more customers at local restaurants, booked up hotels and other early measures of economic change, particularly in the Midwest and the West.

“For towns like Carbondale in states that continue to have access to abortion and border states that don’t, how can you not be impacted by having two, three or four clinics pop up,” Choices CEO Jennifer Pepper said in an interview. “There are thousands of people traveling through your town.” 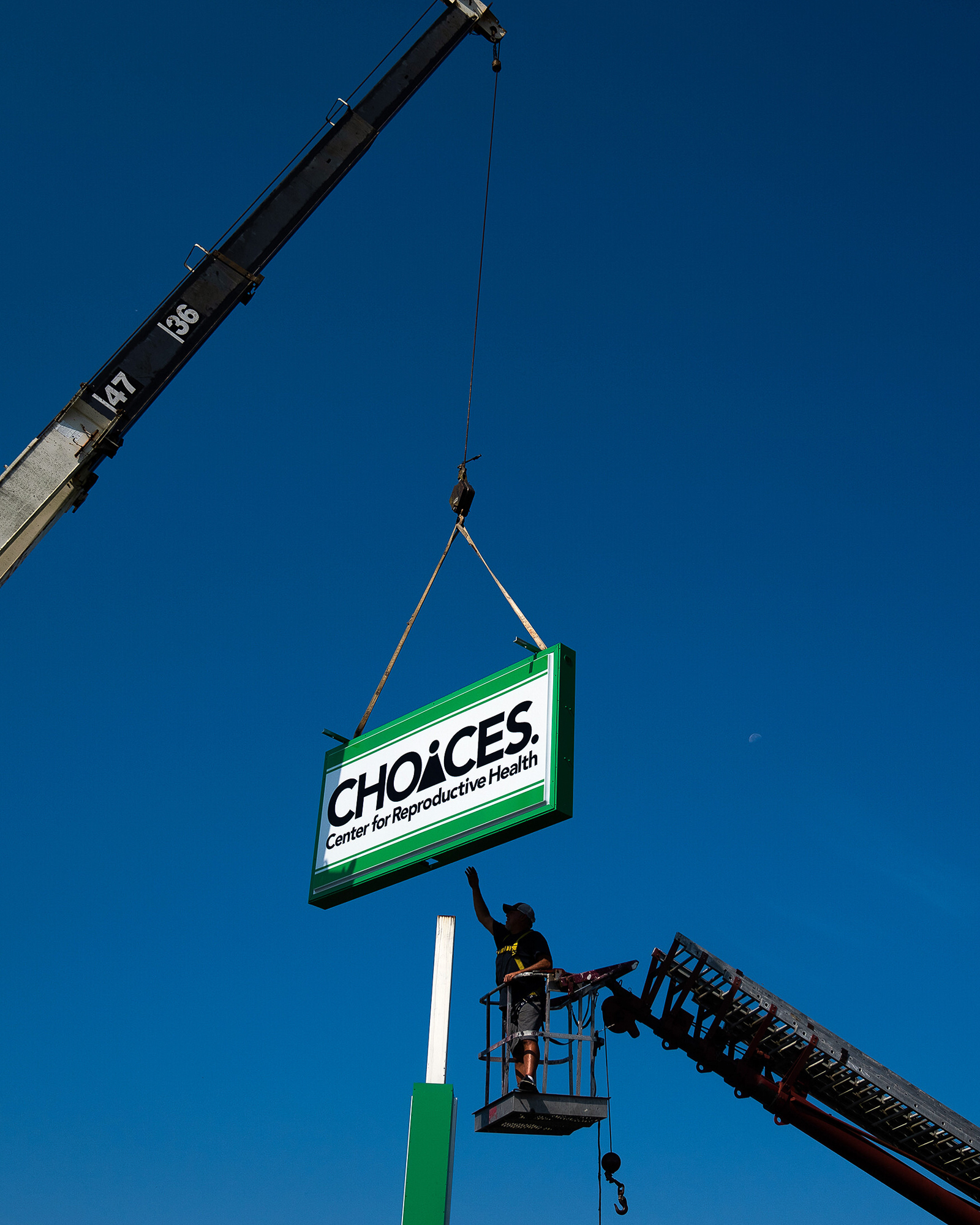 When Choices announced plans to expand into Illinois last spring, it highlighted how the location was just three hours from Memphis and had an Amtrak stop. The clinic is also about an hour’s drive from similarly sized cities in Missouri and Kentucky.

Planned Parenthood, which operates in Illinois as well as along other border states across the country, has seen an “exponential increase” of patients in those stateline communities, according to Lauren Kokum, director of affiliate communications at Planned Parenthood Federation of America.

To accommodate the growth, health centers are now working to increase staffing, extend hours and make other operational shifts, as well as pursue telehealth and new locations to meet the increased demand of people seeking abortion, she said.

The Dobbs v. Jackson decision was issued only six months ago, and it’s not as though southern Illinois tourism offices or businesses are peppering out-of-towners with questions about why they’re visiting. That’s made the economic bump of the new abortion access divide difficult to quantify outside of anecdotal observations about how there always seems to be a car at the gas station filling up for the ride home. But Carbondale officials expect it will show up.

“We don’t know the impact now but believe there will be one. We’re just waiting to see,” Steve Quinn, a business manager at a construction firm who sits on the Carbondale Chamber of Commerce, said in an interview. “We expect we’ll see an impact of more clinics showing up and more people coming to the area. There’s already talk about another hotel.”

The average daily hotel rates and occupancy are up 7 percent over the last year, said Cory Jobe of the Great Rivers & Routes Tourism Bureau, which accounts for six counties in southwest Illinois. “And there wasn’t a major event besides NASCAR that drove demand.”

While Carolin Harvey, a Carbondale council member and mayor-pro-tem who also sits on the town’s Chamber of Commerce, acknowledged that they don’t have tax data yet, that’s beside the point for her.

“Economic impact is secondary to the reason that they’re there,” she said.

The Carbondale clinic, like health centers around Illinois, can conduct an ultrasound, lab exams and abortion all in one visit. And Illinois is one of the few states in the country where abortion is legal for up to 24 to 26 weeks of pregnancy.

To the west, Missouri has a total ban on abortion. To the east, Indiana’s ban is being blocked in court and not in effect. Patients in those states are instead traveling to those that allow abortion, crossing just over the border to clinics in towns like Carbondale.

“That’s one good thing that came out of Dobbs,” said Alison Dreith of Midwest Access Coalition, a fund that helps people access abortion care across the region. “People are opening clinics in smaller communities now where they might not have been able to stay open or keep their doors open because of operation costs.”

Dreith, an alum of Southern Illinois University in Carbondale who remembers how crowded the town would get during big football games or parent weekends, said the town will need a post-Roe upgrade. “The current hotel infrastructure can’t handle the needs of the university community, let alone the new and emerging abortion community,” she said. “It’s something we know we have to face down the line.”

The Virginia-Tennessee state line runs through the town of Bristol, putting the Bristol Women’s Health Center in the middle of a political battle over abortion.

After the Dobbs decision, the clinic’s owners shut down their Tennessee facility and Diane Derzis, a co-owner, opened one a mile away in Virginia, where the clinic would face fewer abortion restrictions — but there’s been drama ever since.

The town council on the Virginia side has been working to change the zoning law to prohibit new abortion clinics within the city. It’s among the first local governments to go against state law protecting abortion access. The clinic is in a legal battle with its lessors, who oppose abortion, too. And Virginia’s status as a relative haven may unravel if Republican Gov. Glenn Youngkin succeeds in getting a 15-week ban.

“They’re trying everything they can to push us out,” Derzis said in an interview. And she’s faced criticism and outright violence before: In 1998, her clinic in Birmingham, Ala., was bombed by Eric Robert Rudolph.

Derzis, who also owns clinics in Richmond, Va., as well as in New Mexico and Georgia, sees border towns as a key part of a strategy for maintaining abortion access in the country. 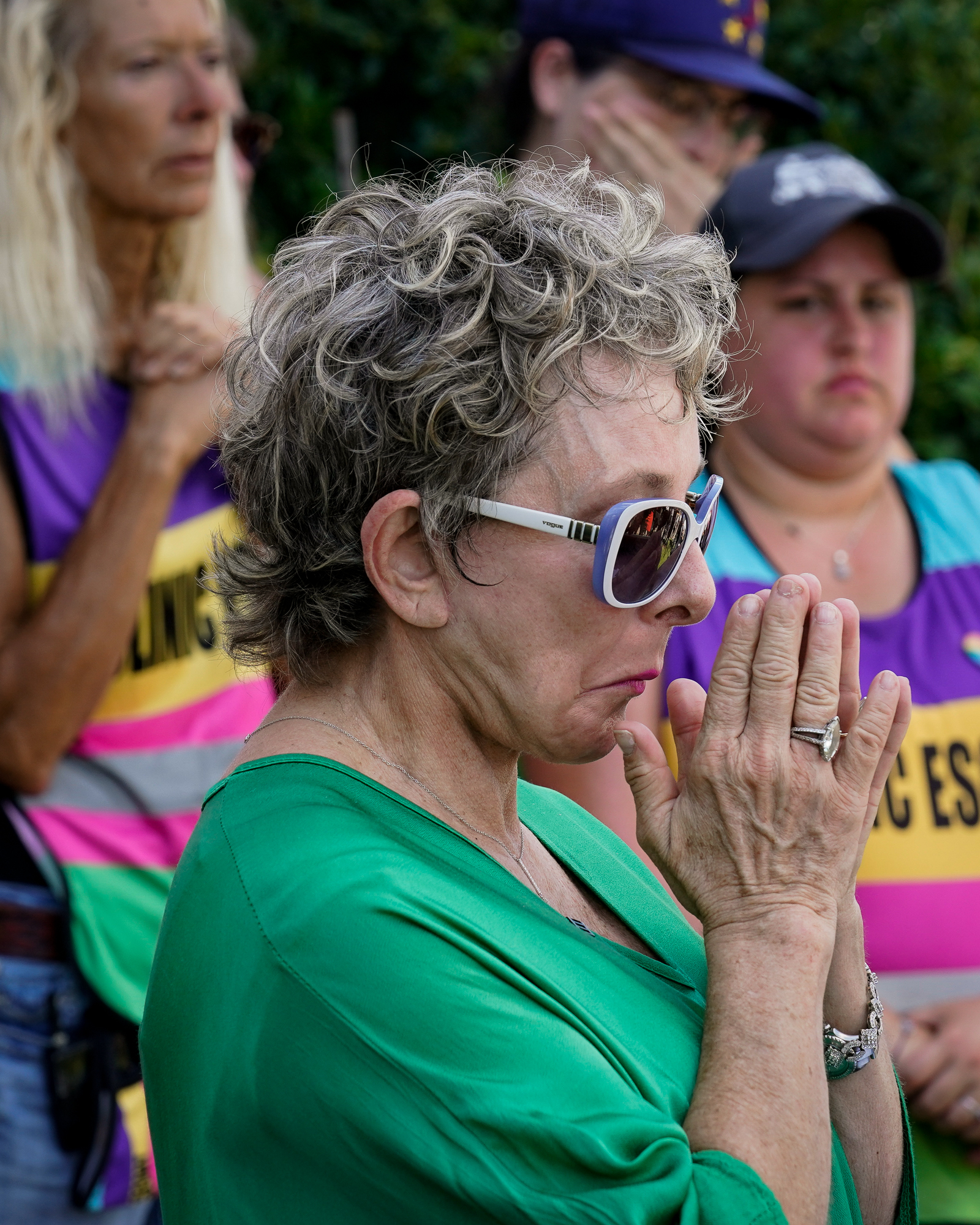 For conservatives who cheered the Dobbs decision, this new growth is worrisome.

Jeanne Ives, a former Illinois state representative who sits on the Illinois Right to Life Action board, said the abortion clinics popping up all along the state’s borders pose a danger to women and raise new political concerns.

“They come in for a quick in-and-out procedure, and a lot of abortions are not easy decisions,” Ives said in an interview. “It basically makes it a drive-thru service decision and I think that’s shameful.”

She also worries that the clinics would make it easier to pressure sex-trafficked girls and others into getting abortions.

“It’s a way to negate abortion laws and parental consent laws with minors,” Ives said. “You are usurping rights by enticing them across the border.”

Some of the most significant gaps in abortion policy run along the border of Washington state and Idaho.

Idaho has one of the most stringent abortion laws in the country. Just last week, the state’s Supreme Court ruled that the Idaho Constitution doesn’t include a right to an abortion. The state prohibits abortions entirely except in instances of rape or to save the life of the patient.

That means residents seeking the procedure cross into Washington state or Oregon. Some Idahoans are even making their way to conservative Utah, which allows abortions up to 18 weeks, said Iris Alatorre, program manager of the Northwest Abortion Access Fund in Pullman, Wash. (Abortion access remains available in Utah while a trigger law is being reviewed in court.)

For students at the University of Idaho in Moscow, even hearing about abortion care is difficult. The university has prohibited professors and staff from providing information about abortion services that are available just eight miles away in Pullman. Citing an Idaho law barring state funds to the promotion of abortions or contraception, the university said employees could face felony charges if they don’t remain “neutral” about abortion. 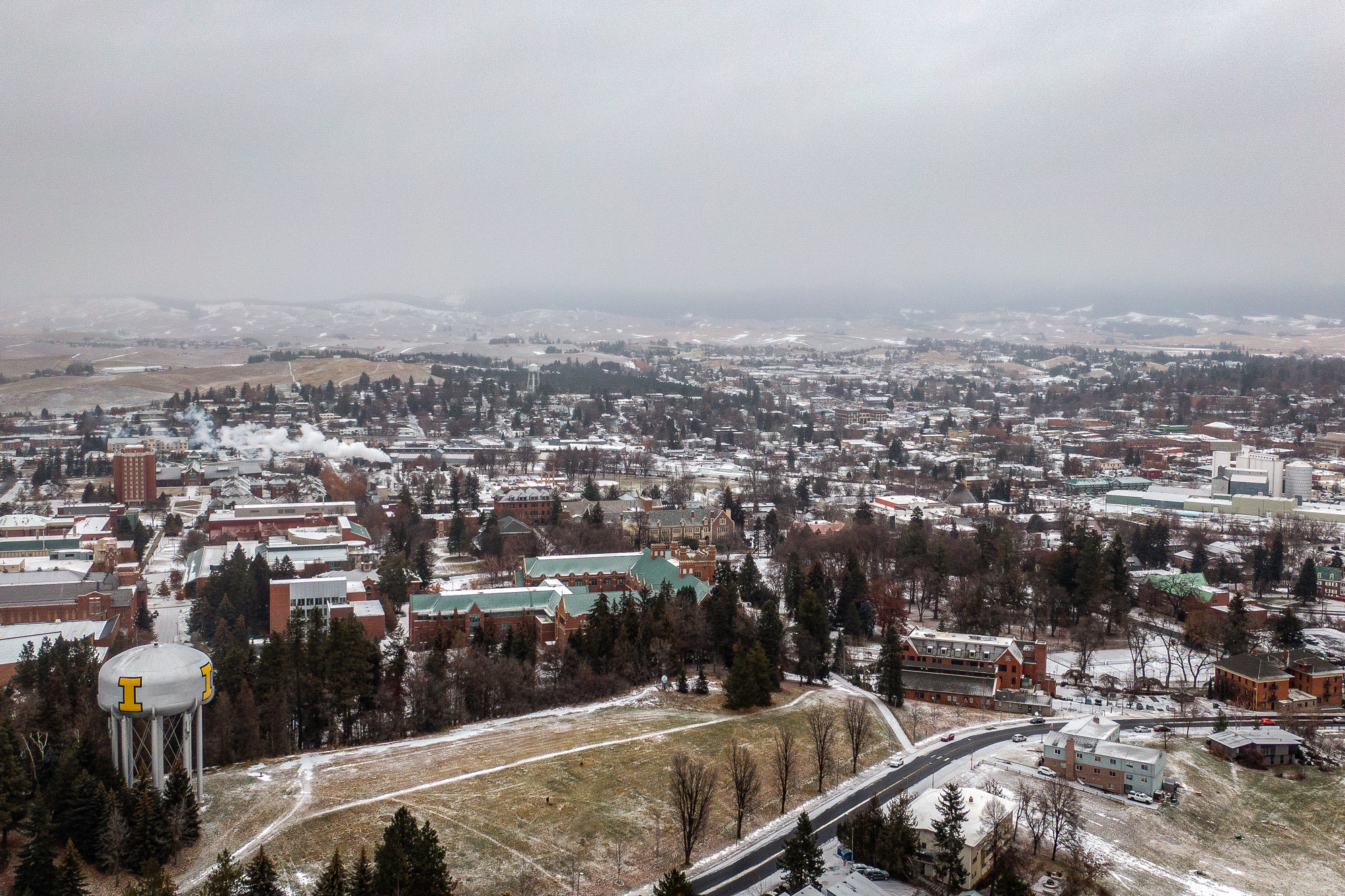 It’s created tension on campus among those who support reproductive rights, and its worrying abortion providers over the border in Washington.

“There are always folks who may not find out about a pregnancy until their second trimester, but the recent increase in cases tells us that people who are dealing with bans in their states are having to delay abortion care,” Alatorre said. “They may not have the information they need to act faster.”

Abortion providers have long tried to operate away from the spotlight. When helping patients travel to a clinic, providers connect with hotels and businesses that are friendly to their cause.

Hotels are usually not the problem, said Alatorre in Washington. But sometimes their staff take offense. “They may have personal beliefs that make them hostile to people,” she said. “There’s a lot of word of mouth about which places are great to work with and which places haven’t been.”

A lot more of that discussion is happening now that clinics are expanding or establishing themselves in places they’re not familiar with.

But many small towns are still trying to figure out how reproductive health facilities fit in their communities and whether the influx of visitors creates other problems.

“What’s tough about border towns is that they’re rural and don’t have a lot of funding,” Mayor Rachel Medina of Cortez, Colo., where abortion is legal at all stages, said in an interview.

The town has seen a rise in patients since the Dobbs decision, she said. But instead of coming from neighboring Utah or Arizona less than 40 miles away, most people are coming from Louisiana, South Carolina and Texas.

This influx of out-of-towners has gone mostly unnoticed, Medina said, but she remains concerned it could put a strain on local services, including nonprofits or volunteer groups and on transportation.

“Small towns take the brunt of it and can barely meet the needs of their own residents,” Medina said.

LLiberal News
The EU chief argued Europe and the US should team up against China to secure a climate-friendly future.
LLiberal News
LLiberal News
SALEM, N.H. — Since announcing in November, Donald Trump had an unconventional start to his third presidential campaign:…
LLiberal News
Vice President Kamala Harris will once again head the U.S. delegation to the Munich Security Conference, two people…
LLiberal News
Is Twitter dying? Chaos at the social-media platform has spurred a flurry of takes about what its end…
LLiberal News
Klaus Schwab will stay in office until he dies, insiders say of World Economic Forum founder.