Home Dems to Tester and Manchin: Run in 2024, save our majority
LLiberal News

Dems to Tester and Manchin: Run in 2024, save our majority 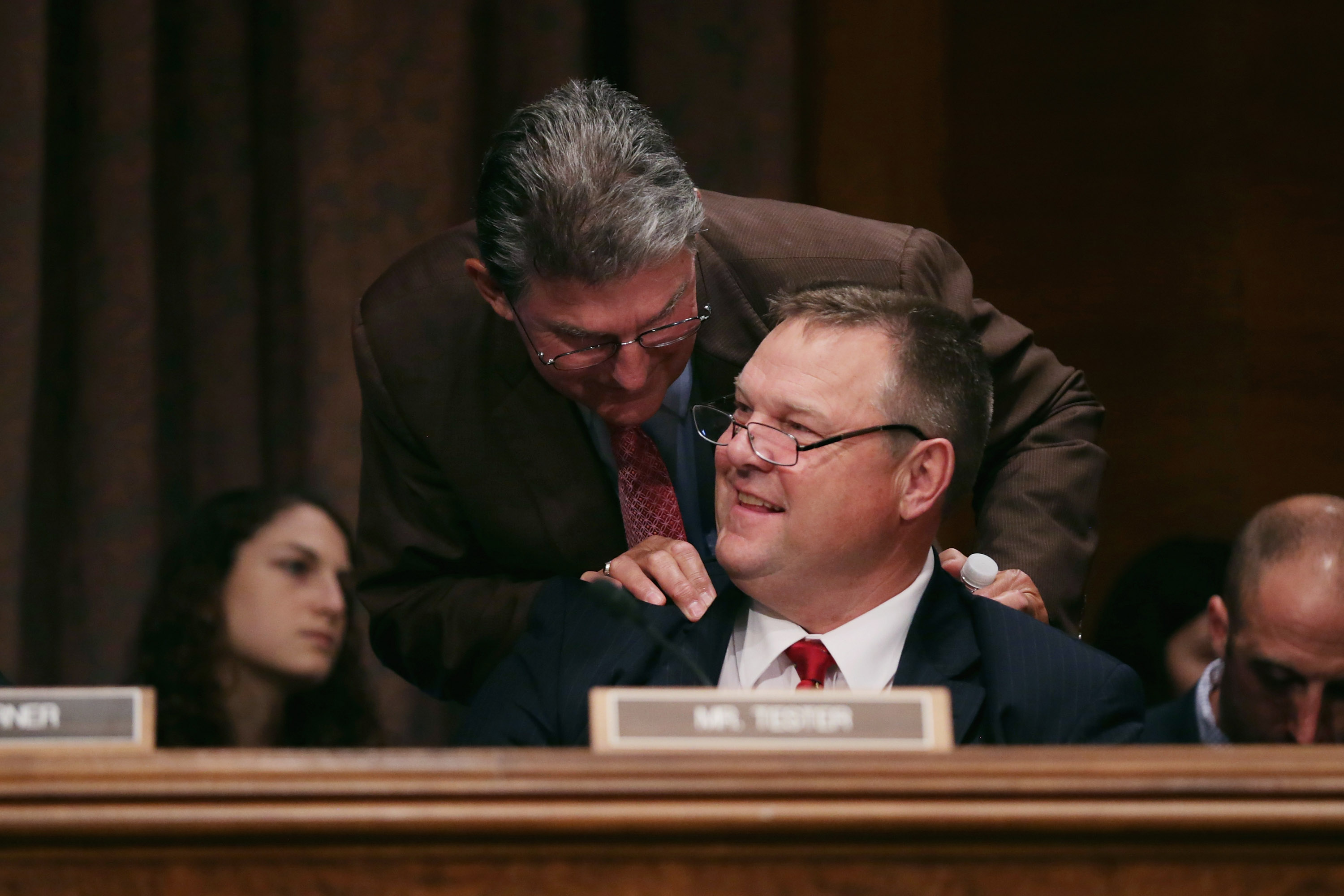 Democrats are already waging what might be the most consequential fight for Senate control next fall: Getting Jon Tester and Joe Manchin to run again.

The decisions of the two Democratic senators from Montana and West Virginia, respectively, will determine their party’s chances of hanging onto its slim majority in 2024. And landing their reelection bids is job No. 1 for Democratic Senatorial Campaign Committee Chair Gary Peters as he embarks on his second tour of duty.

Peters (D-Mich.) will have plenty of help in that task. Democratic senators confirmed in interviews that they’re leaning on their colleagues to help preserve their fragile majority.

And there’s a reason for the urgency. If both Tester and Manchin retire rather than face tough campaigns, it’s nearly impossible to imagine Democrats hanging onto those two seats — or their 51-49 Senate majority.

“Both of them are in challenging circumstances,” said Senate Majority Whip Dick Durbin (D-Ill.). “I think both can win, but they are the best candidates we have in their states.”

The senators’ respective moves will determine how both parties allocate their financial resources in what’s expected to be a tough cycle for Democrats. As they wait on that duo’s fate, the party must sort through its defense of seats in battlegrounds like Ohio, Arizona, Wisconsin, Pennsylvania, Nevada and Michigan, where longtime Democratic Sen. Debbie Stabenow is retiring. There are scant pick-up opportunities.

Tester and Manchin hail from states with slim Democratic benches, so their choices will essentially determine whether their two states are worth the party’s efforts at all. Both men are gifted retail politicians and singular forces in their states, each with his own style.

Manchin has infuriated liberals and drawn calls for a primary challenge from the left, an unrealistic prospect given that he’s the last Democrat standing in high office in West Virginia. As he put it, “there’s no one on the Democratic side in West Virginia beating the door down” to run in his stead, or against him.

The centrist Democrat flirted with leaving the Hill in 2018 after a government shutdown and overall legislative malaise, though he ultimately decided to seek, and narrowly win, another six years in the Senate. And while Manchin is energized by the last two years of lawmaking under President Joe Biden, which frequently placed him at the center of negotiations, he’s feeling no pressure to move quickly.

“I haven’t decided, I swear to God,” Manchin said in an interview. “They would love for me to. But they understand I’ve been doing this for awhile and I’m going to make a decision on my own time.”

Tester, on the other hand, is less conservative than Manchin and has caused much less of a stir over the past two years despite his ideological centrism. And he peppers his public comments with expletives that only a Montana farmer could get away with.

Tester also has one of the toughest commutes in all of Washington, waking up before dawn on Mondays to get to the Capitol for 5:30 p.m. votes. Reflecting on the Montanan’s grueling travel, Sen. Sherrod Brown (D-Ohio) said that Tester “wants to” run again.

“His biggest problem, he’ll say this, is getting here and getting home, it’s a nine-hour trip,” Brown said in an interview. “He’s not getting younger, I don’t think. And he’s really good at his job. He’s confident he’ll win, again, as I am … But I also know that it’s just harder.”

Brown, who is running for a fourth term, said he’s spoken to both Manchin and Tester about their reelections. As Brown sees it, their decisions will also determine his own place on Senate Minority Leader Mitch McConnell’s target list, whether it’s as McConnell’s No. 1 target or somewhere lower down.

As Peters prepares to retake the helm of the Senate Democratic campaign arm, the committee’s 2022-cycle executive director Christie Roberts is also expected to return in a senior role for another consecutive cycle, according to two people familiar with the plan. Critically, Roberts was also Tester’s 2018 campaign manager — and her role may make Tester more comfortable running again.

Meanwhile, in a move that will have everyone in Washington speculating about Manchin’s future, chief of staff Lance West revealed Thursday that he is leaving his office for a role with the American Petroleum Institute.

Nora Keefe, a DSCC spokesperson, called Manchin and Tester: “battle-tested: repeatedly winning challenging elections.” And Sarah Feldman, a Tester spokesperson, said he is “having conversations with his family, as this will be a decision they make together.”

The Senate Republican campaign arm, meanwhile, is already making it clear that regardless of the two senators’ decisions, Montana and West Virginia top their must-win ranks.

“Chuck Schumer wants Joe Manchin and Jon Tester to be human pin cushions for the next two years to protect his other incumbents,” said Mike Berg, a National Republican Senatorial Committee spokesperson. “He knows they are unlikely to win, but he wants them to suck up resources.”

On Thursday, the NRSC launched its first ads against Manchin, Brown and Tester, declaring that the trio should “retire or get fired.” NRSC Chair Steve Daines (R-Mont.) said in a statement that if they run, they face a “brutal two years” of campaigning.

Rep. Alex Mooney (R-W.Va.) is already in the West Virginia Senate race, and several more Republicans are weighing runs against Manchin and Tester, who both survived 2018 campaigns in states that became decisively red in the past decade. Former President Donald Trump won West Virginia and Montana by roughly 39 and 16 points in 2020.

The 66-year-old Tester and the 75-year-old Manchin are currently the only Democrats in Congress representing their states — and they’ve proven hard for Republicans to beat. In 2018, Tester and Manchin won tough reelections by more than 3 points each. Tester, a prolific fundraiser during the 2018 cycle, currently has $2.5 million cash on hand, while Manchin has $9.4 million.

“If Manchin decides to run he’ll win. Nobody knows the state better and talks to his constituents more than him,” said Jonathan Kott, a former Manchin aide.

By hanging on through so many difficult races, the two now are top policy leaders in Congress. Tester chairs the Veterans Affairs Committee and is also a former DSCC chair himself; Manchin is the Energy Committee chair and serves on Senate Majority Leader Chuck Schumer’s leadership team.

They’d confront perhaps the most onerous campaigns of their lives if they run, facing reddening states and the pressurized dynamics that come alongside a 2024 presidential campaign. The filing deadline in both states isn’t until 2024 — Jan. 27 in West Virginia and March 11 in Montana.

“A lot depends on who the Republicans nominate for president, how well Joe Biden is doing,” said Sen. Ben Cardin (D-Md.). “I’m not ruling out the ability to win an open seat but clearly we’re in a stronger position with the incumbent running.”

Cardin had “passing conversations” with Tester about reelection but hasn’t discussed it with Manchin, observing that “it’s not a subject he likes to talk about.” Manchin said there’s nothing specific Democratic leaders can do to sway him to run again: “I don’t try to hold people hostage.”

So far, Stabenow is the only Democratic incumbent to announce her retirement. Though others are expected, many have yet to make an official announcement. As Tester and Manchin mull another run, their Democratic colleagues are offering words of encouragement, but also treading carefully.

“I told them I’ve loved serving with them,” said Sen. Chris Coons (D-Del.), who recounted buttonholing both of them over the past month to make his case for their 2024 campaigns. “I didn’t pick up any particular hints one way or the other.”

LLiberal News
NEW YORK — On one end of Manhattan, one of the nation’s most prominent developers is billing his…
LLiberal News
Secretary of State Antony Blinken will meet in Beijing with his counterpart, Chinese Foreign Minister Qin Gang, on…
LLiberal News
Sinema and Manchin opposed efforts by Senate Democrats to change the rules of the filibuster during the last…
LLiberal News
President Xi Jinping seeks break from foreign friction as he wrestles with Covid and a faltering economy.
LLiberal News
The Netherlands wants the Chinese app to clean up its act on data protection.
LLiberal News
Four members of the far-right Oath Keepers were found guilty on Monday of attempting to derail the transfer…