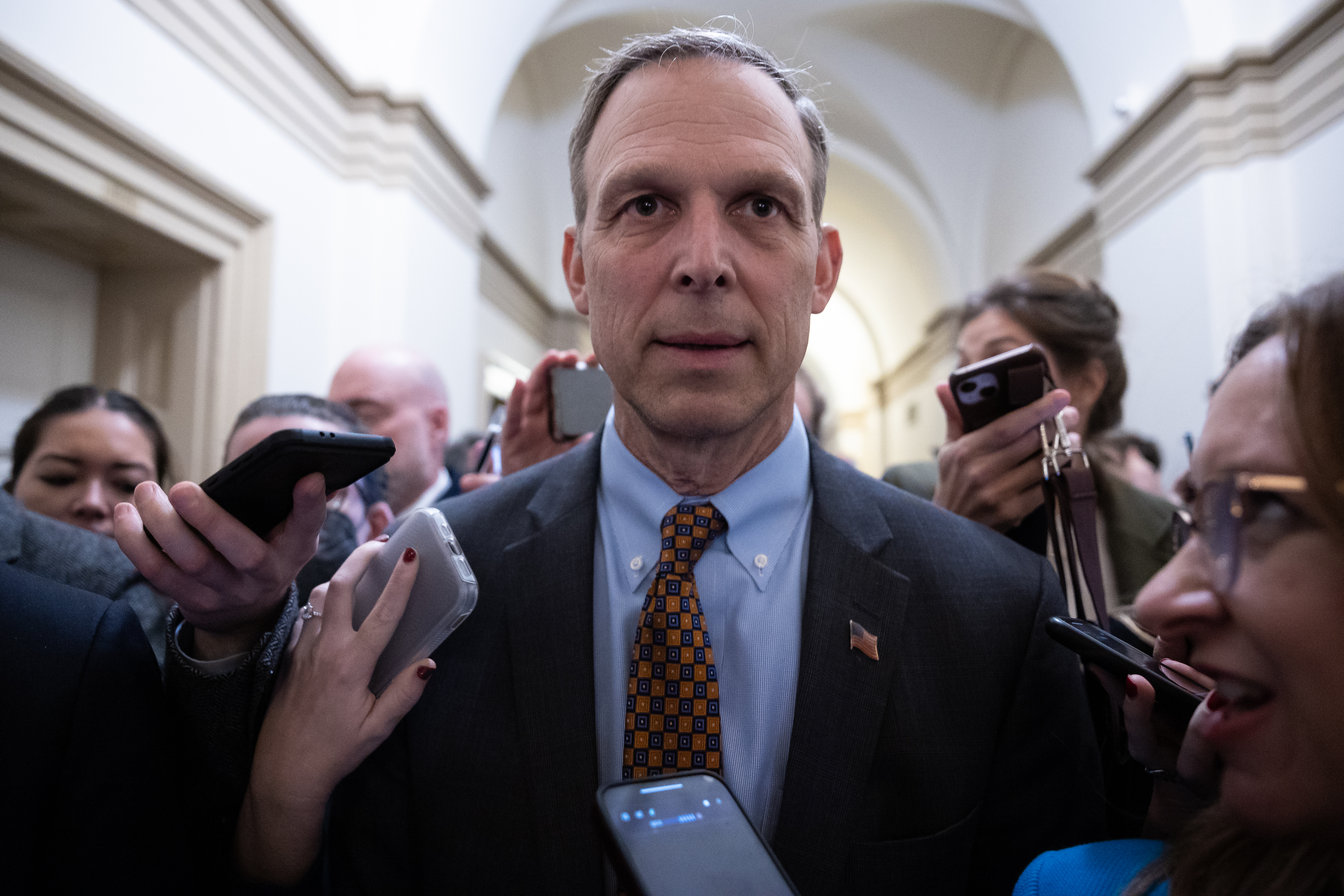 A handful of Republicans who remained in the Jan. 6 committee’s sights throughout its investigation are now leading the effort to deny Kevin McCarthy the speakership — using their power to bring the House to a standstill.

During its last days of existence, the Capitol riot panel unleashed a massive trove of evidence with an unmistakable conclusion: At every stage of former President Donald Trump’s bid to overturn the 2020 election results, a phalanx of hardline GOP lawmakers were egging him on. The committee’s latest material, including 250 witness transcripts, often portrayed those House Republicans as drivers, enablers and even architects of Trump’s Jan. 6 scheme.

“There are some members who clearly have a track record opposing democratic norms,” select panel member Rep. Pete Aguilar (D-Calif.) said, when asked about the nexus between McCarthy dissenters and Jan. 6. “And I think it’s pretty clear if you read [former White House chief of staff] Mark Meadows’ text messages and the January 6 report who exactly we’re talking about.”

But they weren’t the only congressional Republicans who took consequential actions as the Capitol hurtled toward what became a violent siege by his supporters two years ago.

Others took a more nuanced tack, countenancing Trump’s baseless claims of election fraud while working to substantiate them and also pushing back against the most extreme impulses of his inner circle. Still more Republicans mounted a quiet resistance to Trump’s gambit, lobbying to contain the damage while doing little to publicly signal their disapproval. 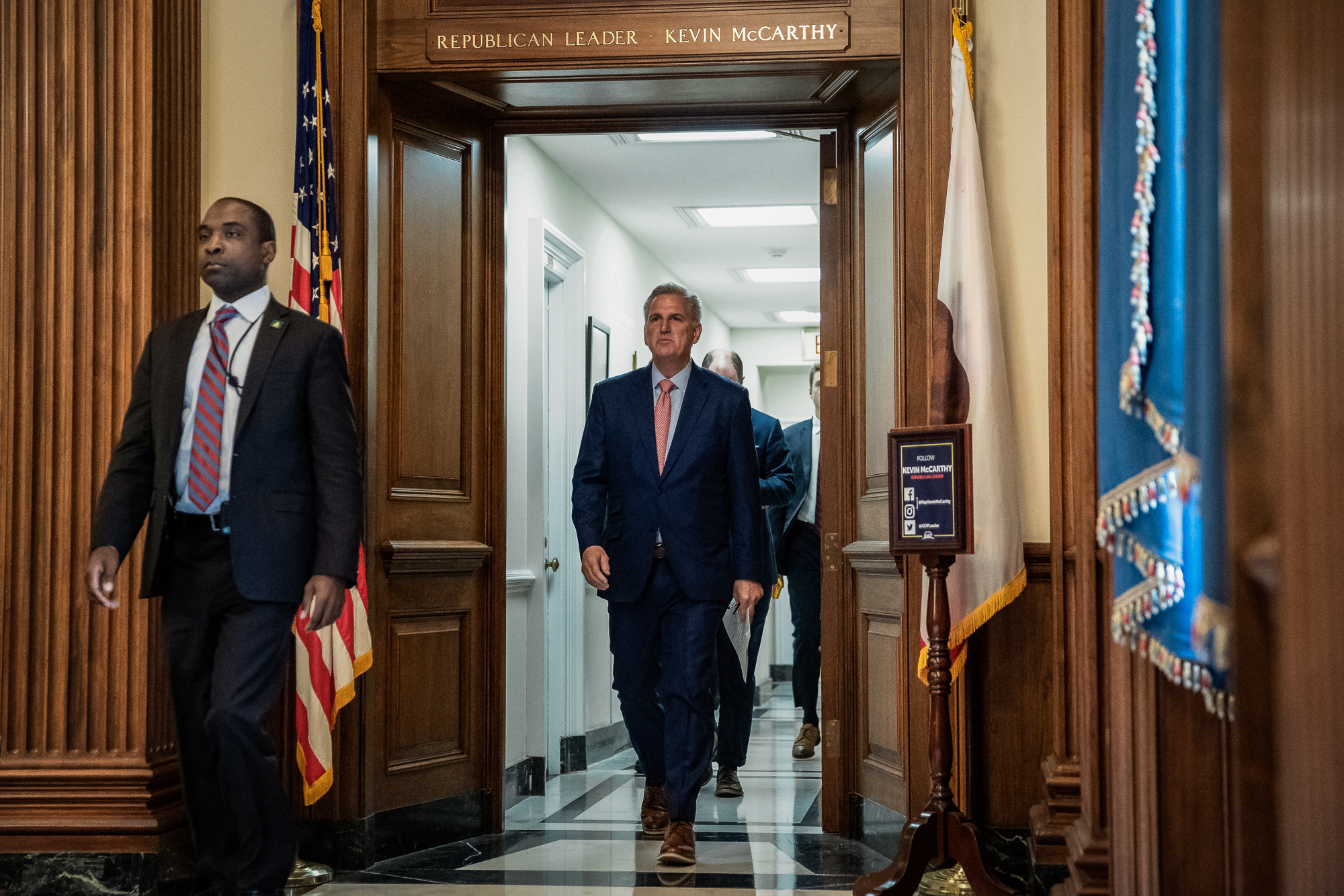 “There were strong advocates for coup-type activity, and there were equivocators, and there were people who wanted to be all things to all people,” said Rep. Jamie Raskin (D-Md.) of his GOP colleagues’ role in the investigation.

A review of the committee’s witness transcripts, as well as voluminous records — from White House call and visitor logs to private text messages to Trump aides’ emails — tell a more complete story of the role some GOP lawmakers played.

Freedom Caucus members were described by select panel witnesses as routinely in touch with Trump and his allies virtually from the moment Joe Biden appeared on track to win the 2020 election. Trump himself told Justice Department aides that he viewed those Republicans as critical to his effort to remain in power.

“[J]ust say the election was corrupt + leave the rest to me and the R. congressmen,” Trump said in a meeting with top DOJ officials in late Dec. 2020, according to notes from deputy attorney general Richard Donoghue.

Two Freedom Caucus members and McCarthy critics stand out among their colleagues for their active efforts to support Trump’s efforts: Perry and Gosar. Witnesses described Gosar as one of the most ubiquitous players.

Ali Alexander, the leader of the pro-Trump “Stop the Steal” effort, put Gosar among a small group of members who might relay updates after speaking to Trump. He also said Gosar supported his push for a Washington protest on Jan. 6.

Other witnesses said Gosar was a member of a Twitter direct message thread that helped organize Trump’s Jan. 6 rally and related events. 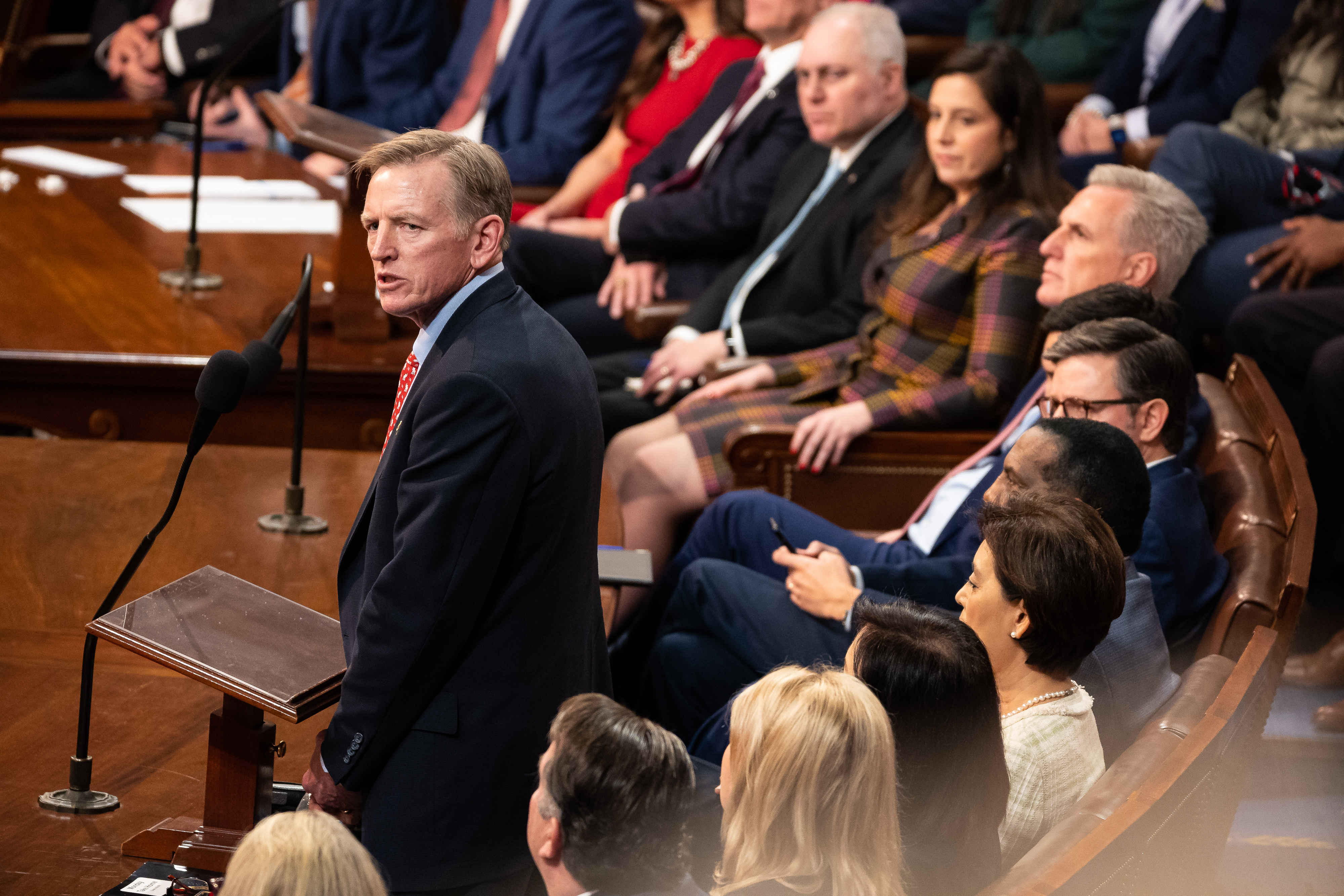 At 5:15 p.m., as lawmakers sheltered from the riot, Gosar messaged the “Stop the Steal” group: “We’re still on lockdown in the congressional office.”

“It looks like Congressman Gosar sent you something called Kill Chain: The Cyber War on America’s Elections … the website there is somebitchtoldme.com,” an unidentified committee investigator said to Hodgson, according to transcripts. “Would you have felt comfortable sharing with the Vice President information you learned from a website called somebitchtoldme.com?”

Perry was another frequent presence in pre-Jan. 6 planning. Text messages the select committee obtained from Meadows show Perry pushing fringe theories about European efforts to steal the 2020 election from Trump.

Perry helped engineer a nearly successful bid to install Jeffrey Clark — whom Trump viewed as an ally in his pressure campaign aimed at getting Republican-controlled state legislatures to appoint pro-Trump electors — atop DOJ. Visitor logs released by the select committee reflect a Jan. 3, 2021 meeting at the White House residence with Perry and Clark.

Spokespeople for Perry and Gosar did not immediately respond to a request for comment.

Other GOP lawmakers helped encouraged Trump’s efforts in public and private. Rep. Louie Gohmert (R-Texas) led a lawsuit against Pence meant to force his hand and declare whether he would attempt to block the transition of power on Jan. 6.

The select committee’s report spends little time on the role Senate Republicans played while Trump was mounting his bid to cling to power. But the evidence shows two in particular — Sens. Mike Lee of Utah and Lindsey Graham of South Carolina — sought to thread a needle between tolerating claims of fraud and pushing back.

“That seems to be the sweet spot for getting my colleagues to engage,” Lee said. 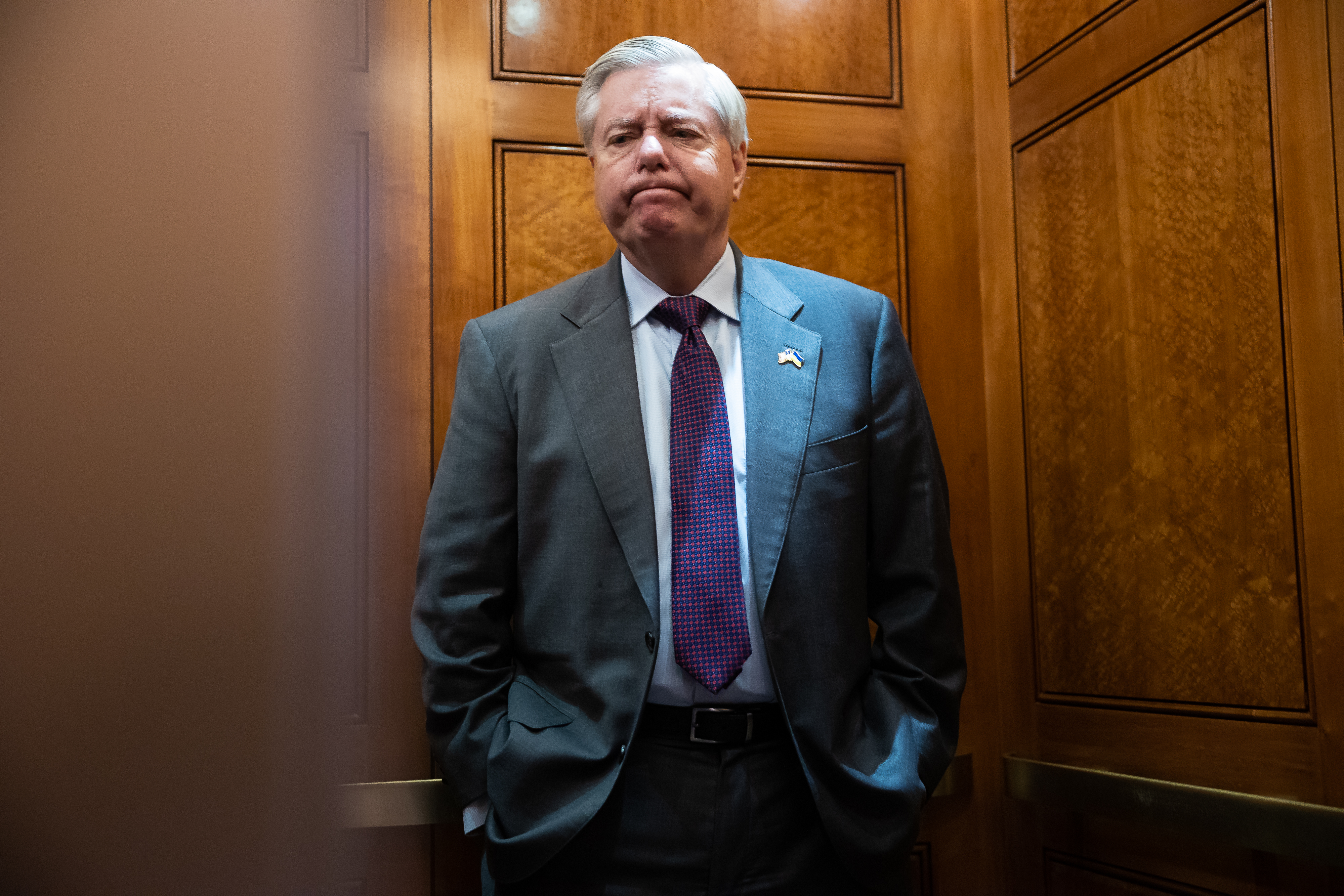 A week before Jan. 6, Lee had another extended conversation with Mitchell, who pressed him to convince his colleagues to hold hearings on alleged election irregularities. But Lee had seemed to sharply turn against the notion of using Jan. 6 as a backstop to challenge the election.

“January 6th is, however, a dangerous idea. Not just for the republic itself, but also for the president,” Lee said.

A Lee spokesperson did not immediately respond to a request for comment.

Graham did not hold any hearings, but he similarly spent the week before Jan. 6 furthering Trump’s claims of election fraud while privately pleading with the then-president’s allies for any evidence to conclusively establish that fraud occurred.

A handful of GOP lawmakers embraced Trump’s actions, albeit quietly. Few, if any, offered full-throated resistance to it — a hallmark of the Trump era — but instead attempted to embolden Trump’s more sober-minded advisers and worked to tamp down their own colleagues’ attempted destabilization.

Chief among those Republicans was Senate Minority Leader Mitch McConnell, whom Pence aides described as quietly active in pressing GOP colleagues to refrain from challenging the election results on Jan. 6. McConnell publicly described Biden as the president-elect after members of the Electoral College cast their ballots on Dec. 14, 2020, but the select committee’s evidence portrays his work as more concerted than has been publicly described.

Other Senate Republicans were among those who feverishly sought to convince then-President Trump to call off rioters once they had breached the Capitol. Ivanka Trump described phone calls and texts that day with Sen. Susan Collins (R-Maine).

“The President needs to put out a very strong tweet telling people to go home and to stop the violence now,” Collins texted Ivanka Trump at 3:37 p.m. on Jan. 6.

Collins called her again that evening as well, she recalled, accompanied by Sen. Lisa Murkowski (R-Alaska).

The duo was “at Senator Murkowski’s apartment and were understandably quite shaken by the events of the day,” Ivanka Trump recalled, mentioning that there was a “bottle of wine” involved.

A Murkowski spokesperson did not immediately respond to a request for comment.

LLiberal News
Kevin McCarthy has told House Republicans to treat every committee like the Oversight panel — that is, use…
LLiberal News
The storming of the presidential palace and trashing of government buildings in the Brazilian capital by thousands of…
LLiberal News
The Justice Department on Thursday announced it had disrupted a notorious cybercriminal group behind ransomware attacks on more…
LLiberal News
SALEM, N.H. — Since announcing in November, Donald Trump had an unconventional start to his third presidential campaign:…
LLiberal News
As Russia’s total aggression on Ukraine nears its first year, some people in the United States and elsewhere…
LLiberal News