Hochul and Adams face major test in 2023 on shared vision for housing, crime 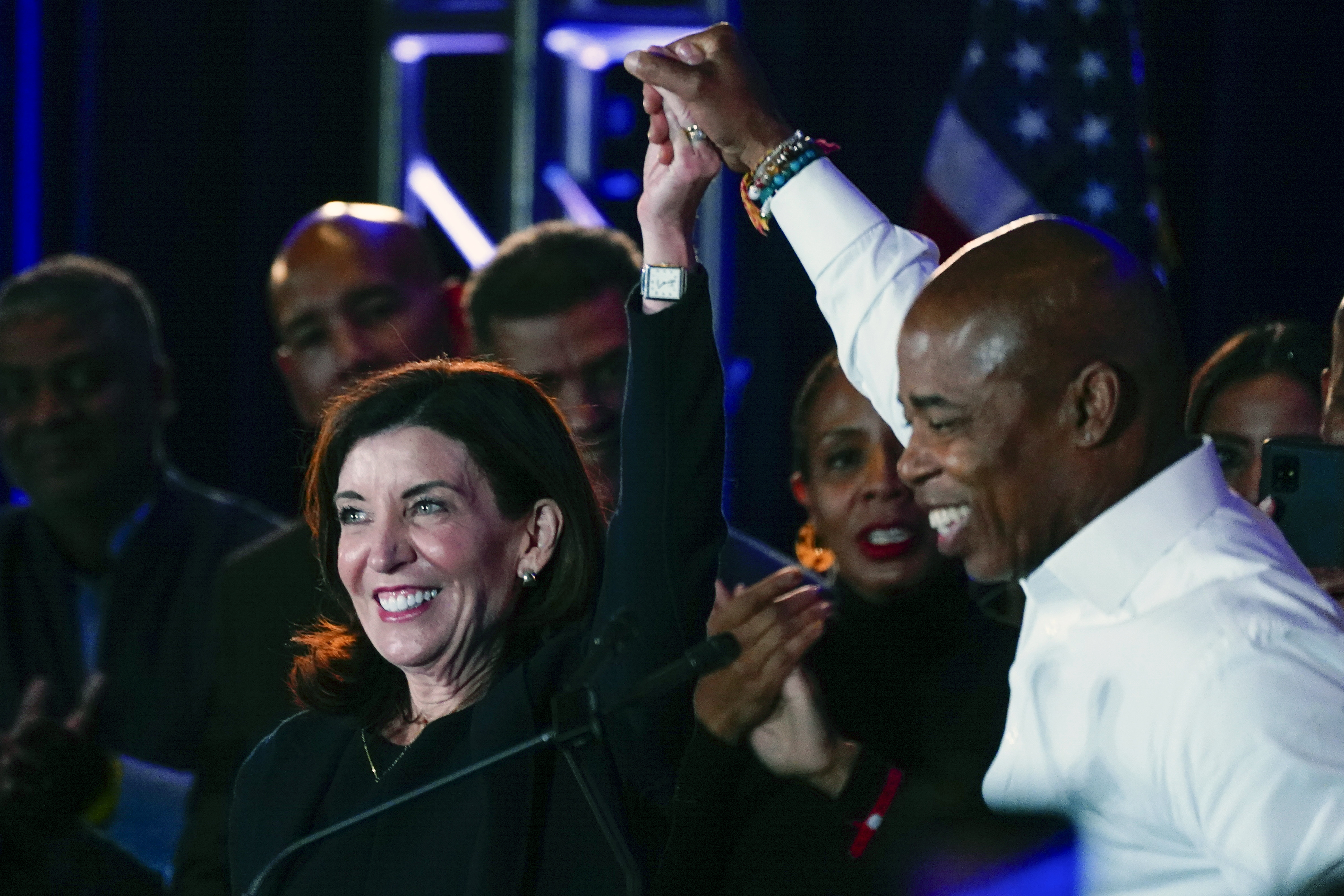 NEW YORK — Gov. Kathy Hochul and Mayor Eric Adams have repeatedly said they can always count on one thing: each other.

In a state where their predecessors were known for publicly bickering even during the darkest days of the pandemic, the Democratic leaders have touted the strength of their relationship.

Now, their ability to execute a shared vision as two moderates will face its biggest test as they seek to enact a sweeping legislative agenda to stimulate the economic recovery of the nation’s largest city in the wake of the Covid-19 pandemic. They must also address crime concerns that fueled a red wave in November across deep-blue New York.

Doing so will require cooperation from the more liberal leanings of the state Legislature and City Council that hasn’t always seen eye-to-eye with its respective executives on major issues of policy. But Hochul and Adams are banking that a unified approach will move the needle on a number of top items from changes to the state’s controversial laws ending cash bail to a rapid increase in housing development in a state controlled entirely by Democrats.

“People realize that this is an important time for New York,” said Dan Doctoroff, a deputy mayor in Mike Bloomberg’s administration and co-chair of the “New New York” economic development panel formed by Hochul and Adams. “Both the governor and mayor want to get things done at a critical moment and they don’t have the egos that we’ve seen sometimes with their predecessors.”

The approach is a marked difference by Albany standards, given the notoriously icy relationship shared by former Gov. Andrew Cuomo and Mayor Bill de Blasio. The two Democrats feuded on everything from policing in the subway to shelter-in-place orders at the height of the pandemic.

But several people close to Hochul and Adams said in interviews that 2023 will be a pivotal moment for the two to move ahead on areas of alignment years away from their respective reelection. Adams, who struggled to move many policy items in Albany his first year in office,is making early moves to advance top initiatives on housing and public safety ahead of the official state budget process. And Hochul has city voters to thank for winning her first term in November — the closest governor’s race in the state since 1994.

“They’ve got their footing, they’ve got their first-year priorities behind them now and can focus on their long-term plans without worrying about the politics of it all,” said a city official who works closely with the two, and was granted anonymity to speak candidly.

Adams recently recruited former Staten Island state Sen. Diane Savino — a moderate Democrat with strong allies and adversaries in Albany because she sided with Republicans for several years — as an adviser to advance his goals in the state Capitol, Washington, D.C., and elsewhere. “Someone with her extraordinary relationships will be crucial in helping us move forward our agenda in our Aaron Judge year,” Adams said in a statement to POLITICO.

Both Hochul and Adams have set massive targets for housing development, amid a shortage that has significantly increased rents and the cost of buying a home.

Hochul committed to build 800,000 new units over a decade and is expected to roll out a comprehensive housing plan as part of her State of the State address Jan 10. The figure includes Adams’ “moonshot initiative” of adding 500,000 homes in the same time frame.

Their economic development panel recommended a number of initiatives to boost development, from the creation of new tax benefits to incentivize housing production to zoning code updates. But doing so will require multiple changes at both the state and city level.

All of it is aimed at making New York more affordable as it suffers from the worst population losses in the nation.

“We’re not going to achieve the objective of building over 800,000 new units in the next 10 years if we don’t get rules changed at Albany — some of them are creating barriers to development — as well as what we need to do in the City Council,” Hochul said at a press conference last month. “So that’s why working with the mayor is going to make a big difference — this shared objective: to break down all the reasons why we have not kept up with other cities, we’re about half of what Boston and Philadelphia and Washington have done.”

In an interview with POLITICO in December, Adams also emphasized the need to “come out of Albany with a real housing agenda.”

“We have to incentivize development,” he said.

They will also need a united front if they plan to jam changes to the state’s controversial bail laws through resistance from the Democratic-led Legislature.

The laws, which in 2019 eliminated cash bail for all but the most violent crimes, became a central line of attack in the midterm elections that lost three House seats to Republicans. Opponents pointed to the laws, often with little concrete evidence, as allowing dangerous individuals to walk free and commit additional crime.

Leaders have been particularly dogged by the issue of whether judges should be permitted to consider “dangerousness” when setting bail, a standard used successfully in other state’s bail overhauls, such as in neighboring New Jersey. Hochul and Adams recently met privately to hash out a plan that would push for more discretion for judges in setting bail and also target recidivism.

State lawmakers, who passed the laws to broad social justice fanfare three years ago but have already adjusted them twice since, are not enthused about yet another year of such talks dominating the session and drowning out the rest of their priorities. Legislative leaders’ relationship with Adams is less cozy: They’ve rebuffed many of his asks during his first full year and criticized his lack of engagement.

Adams, a former Brooklyn state senator, has recently been sparring with Assembly Speaker Carl Heastie and Senate Majority Leader Andrea Stewart-Cousins over the state’s response to the growing influx of asylum seekers, telling POLITICO in late December that “Governor [Kathy] Hochul has been an unbelievable partner,” but “there are three bodies up there. Where are the other bodies? We’re not hearing anything.”

That wasn’t received well by Heastie, who told reporters in the Capitol the following day [Dec 22] that “people know I’m a texter” and Adams could pick up the phone any time, but has not.

“The mayor professes to know how Albany works, but I think he could do a better job at communicating,” Heastie said. “When I look at the comment from the majority leader, she said the same thing. Maybe he tells the governor his plan, maybe he tells others his plan, but he has yet to tell me about a plan on the issue of migrants.”

But in the aftermath of a bruising midterm election, they are attempting a united front, in public at least. On Thursday, Heastie, Stewart-Cousins and Adams all gathered with The Rev. Al Sharpton and other top Black leaders across the state to talk about crime.

Given the complete lack of specifics the group shared with the press after the 90 minute meeting, much work remains to bring the leaders together on specific policies. About the only area of agreement they offered publicly was something so broad as to be meaningless.

“We all want our communities to be safe,” Heastie said, adding, “So I think there’s a common ground.”

Joseph Spector and Sally Goldenberg contributed to this report.