In conservative states, abortion opponents push back on Republicans 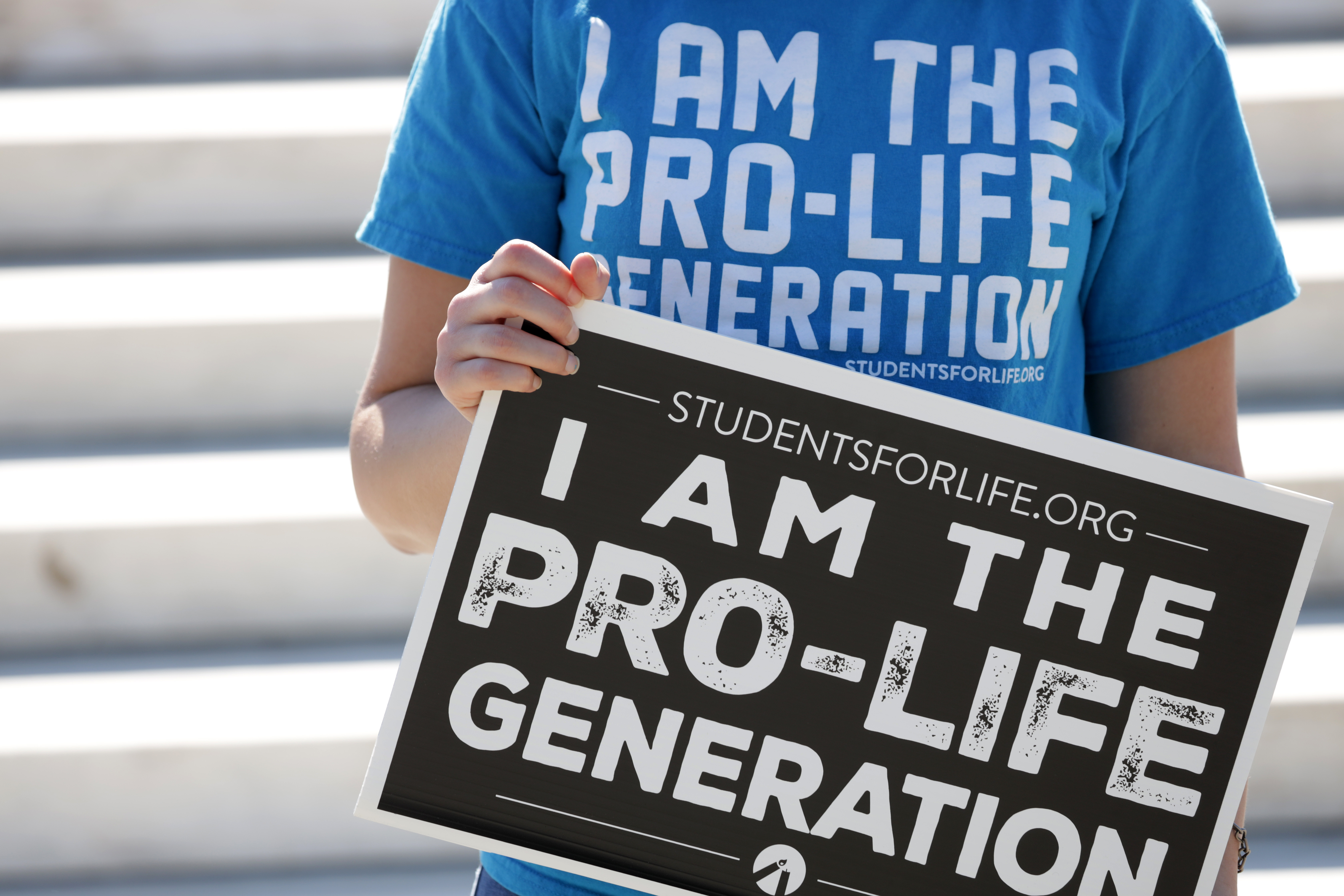 The advocates fear GOP-controlled legislatures — many convening for the first time since Roe v. Wade was overturned — will water down their near-total abortion bans that took effect last year and stir up politically contentious debates over laws that have already been vetted.

Debates about when physicians can perform abortions to protect the life or health of a pregnant person and whether to add exceptions for rape and incest could delay changes to laws that doctors say put lives in danger.

At the same time, these disagreements threaten to further fragment the anti-abortion movement, which was unified for nearly 50 years over the goal of toppling Roe. And they portend further infighting in states where the biggest threat most GOP lawmakers face is a primary from the right.

“As far as the Republican Party, I don’t think we’ve ever really defined what it means to be pro-life,” said Tennessee House Speaker Cameron Sexton, who is pushing to clarify the state’s abortion law and is open to adding rape and incest exceptions. “Unfortunately, we have a wide variety of people who say they’re pro-life. Some believe in no abortions at all. Some believe in exceptions. Some believe when you hear a heartbeat. Some believe other things.”

Similar debates are heating up in states such as Idaho, Missouri, North Dakota, Utah and Wisconsin, where GOP lawmakers have introduced or may soon introduce bills that revisit who is exempt from their state’s near-total abortion bans — some of which date to the 19th century.

“When the legislature passes a law, it’s very important that the people who are going to be governed by that law — and possibly criminalized, depending on what they do — understand clearly what the law means,” said Utah Republican Rep. Raymond Ward, whose bill tweaks the state’s medical exception language.

Sexton, Ward and other GOP lawmakers remain opposed to abortion but say they are responding to physicians who complain the laws are so confusing that they’ve in some cases delayed or denied medical care because of fears of prosecution.

Some anti-abortion groups, however, view the proposed changes as a betrayal of their cause and are pressing Republicans to hold the line. They fear that lawmakers, motivated by political concerns, will weaken what they view as gold-standard laws — and are instead urging state attorneys general or medical licensing boards to make any clarifications.

“All of the sky-is-falling misinformation about the laws isn’t actually coming true,” said Stephen Billy, vice president of state affairs at Susan B. Anthony Pro-Life America. “Letting the laws come into effect and continuing to educate on the laws, I think, is the prudent thing to do right now.”

In several states, nonpartisan medical associations have urged lawmakers to revisit abortion laws. They said the laws have left doctors vulnerable to prosecution and loss of their medical license before they’ve even stood trial under what’s known as an affirmative defense.

“Any time a physician performs a pregnancy termination for, say, an ectopic pregnancy to save mom’s life, they’re technically committing a felony,” said Yarnell Beatty, senior vice president and general counsel for the Tennessee Medical Association. “The only thing between them and jail is the hope that the affirmative defense will work at trial and the jury will agree with their position and acquit them.”

While no physician has been criminally charged for providing a medically necessary abortion since the laws in Tennessee and elsewhere have taken effect, some doctors said the laws have changed the way they practice medicine.

Progressive advocacy groups representing patients and doctors, including the ACLU, said carve-outs to abortion restrictions will not mitigate the harm. If a law is too broad, they argue, doctors won’t know exactly what kind of health care emergencies allow for an abortion. If it’s too specific, doctors could be prevented from using their medical judgment in a life-or-death scenario.

“Politicians aren’t doctors — they shouldn’t be legislating personal medical situations,” said Jessica Arons, a senior policy counsel for the ACLU. “They can’t anticipate every complication that could arise in a pregnancy.”

Republican Tennessee Sen. Richard Briggs — who voted for the state’s trigger law in 2019 — said he changed his mind after hearing from physicians who were afraid to perform abortions in cases of ectopic pregnancies, which are nonviable and can be fatal if not terminated.

He’s one of several Republicans calling for changes to the state’s affirmative defense provision as well as rape and incest exceptions.

“I don’t like the idea of the legislature trying to practice medicine,” said Briggs, a retired cardiac surgeon.

But Briggs’ position is earning him enemies among abortion opponents who are resisting changes to the state’s 2019 trigger law banning abortion in nearly all circumstances. The anti-abortion group Tennessee Right to Life revoked Briggs’ endorsement in December because of his comments on the law.

“We feel very strongly that it needs to stay as it was drafted,” said Will Brewer, legal counsel and lobbyist for Tennessee Right to Life, which led the charge on the trigger law. “[It’s] sad to say, in a GOP supermajority legislature, that we have to play defense on this.”

In Utah, Ward said his bill would clarify language that is confusing to doctors, including “irreversible impairment of a major bodily function” and “mentally vegetative state.”

In Wisconsin, Republican Assembly Speaker Robin Vos is speaking with his caucus about tweaking the state’s 1849 abortion ban, which allows for “therapeutic” abortions that are “necessary … to save the life of the mother.” He proposed adding clear life and health exceptions in the pre-Roe law and allowing abortions in cases of rape and incest — though Democratic Gov. Tony Evers, who is challenging the 1849 law in court, has vowed to veto any bill that keeps the pre-Roe law in place.

Republican North Dakota Sen. Janne Myrdal is pushing a bill that would change the state’s affirmative defense provision for doctors to an exception explicitly allowing abortions in cases of medical emergency, in addition to other changes she says would clean up the state’s abortion law. The legislation is supported by doctors, hospitals and in-state anti-abortion groups.

“We don’t want any ambiguity in the law whatsoever, and it’s time that we have that conversation face-to-face instead of fear mongering like the abortion industry has been doing up here with, ‘Oh my gosh, they’re going to arrest women that do IVF or take birth control or go to Moorhead, Minnesota, they’re going to arrest them when they come back.’ All of that is just complete bull. It’s not true,” Myrdal said.

And in Missouri, lawmakers are having conversations about whether to clarify the definition of abortion or add rape and incest exceptions, said Sam Lee, director of Campaign Life Missouri.

GOP lawmakers pushing for changes to their state abortion laws are pitching them as both good policy and broadly supported by the public, pointing to polls that show their near-total abortion bans are wildly unpopular. A November poll from Vanderbilt University, for instance, found that 75 percent of people think abortion should be legal in Tennessee if the pregnancy is the result of rape or incest.

“I don’t think it’s a knee-jerk reaction,” Sexton, the Tennessee House speaker, said. “I just think it’s members talking to people in their district and having an understanding of the people they represent, where they’re at.”

Some state-level anti-abortion groups, however, have signaled a willingness to work with their state’s GOP lawmakers to clarify existing exceptions.

Gracie Skogman, legislative and PAC director for Wisconsin Right to Life, said that while anti-abortion advocates on the ground don’t see pursuing rape and incest exceptions as a “worthwhile task” — forcing GOP lawmakers to take a difficult vote ahead of an essentially guaranteed veto — they are encouraging lawmakers to clarify the medical exceptions.

Abortion rights advocates, meanwhile, are dismissing the debate about whether to clarify or add new exceptions to abortion laws as an attempt by Republicans to save face while having little to no impact on people’s ability to access abortion.

“Exemptions don’t reopen clinics. Even where they go back and add broader exemptions to state law, that won’t be enough for clinics that shut down to reopen and provide services,” Arons said.

Abortion providers in states with new bans said the rules for Medicaid funding for abortion — which have operated for decades with the same rape, incest and health exceptions now under discussion — illustrate the gap between what’s allowed in theory and what works in practice.

Some state laws, for instance, require people to file a police report to qualify for a rape or incest exemption — a deterrent to marginalized groups that fear contact with law enforcement or those who don’t know how to navigate the legal system.

Ashley Coffield, the CEO of Tennessee’s Planned Parenthood Affiliate, said that in the 10 years she’s worked there, they never had a case of rape or incest qualify for Medicaid coverage. Planned Parenthood’s Missouri affiliate pointed to a similar record when asked why they oppose the push to add exceptions, saying that in the 18 months before Roe was overturned, only two of their patients qualified under the rape and incest exemptions for Medicaid coverage.

“They don’t actually protect patients in reality, and neither do medical emergency exemptions,” said Bonyen Lee-Gilmore, the spokesperson for the network’s St. Louis region clinics. “As the provider, we know that folks very rarely qualify.”

Doctors acknowledge the changes won’t restore people’s ability to access abortion care. But they said the tweaks could save a patient’s life and keep them out of jail.

“This is about taking care of patients. It’s about getting the government out of my exam room and letting me do what I do well, which is to practice medicine and save people’s lives,” said Nicole Schlechter, an OB/GYN in Nashville.

LLiberal News
Kyiv’s forces are taking ground around a strategic city in the eastern Luhansk region, a senior U.S. military…
LLiberal News
Rep. Adam Schiff kicked off a long-awaited campaign for Senate Thursday, entering a crowded field against an incumbent…
LLiberal News
BAKERSFIELD, Calif. — Earlier this week, Cathy Abernathy, a Republican strategist here, was asked by a local reporter…
LLiberal News
Kevin McCarthy and his conservative opponents have reached a tentative breakthrough after a days-long standoff, giving the California…
LLiberal News
ALBANY, N.Y. — New York’s concealed carry restrictions can be enforced as legal challenges continue, the Supreme Court…
LLiberal News
He will be officially sworn in to his new role Wednesday.