Revealed: Who visited the Trump White House before Jan. 6 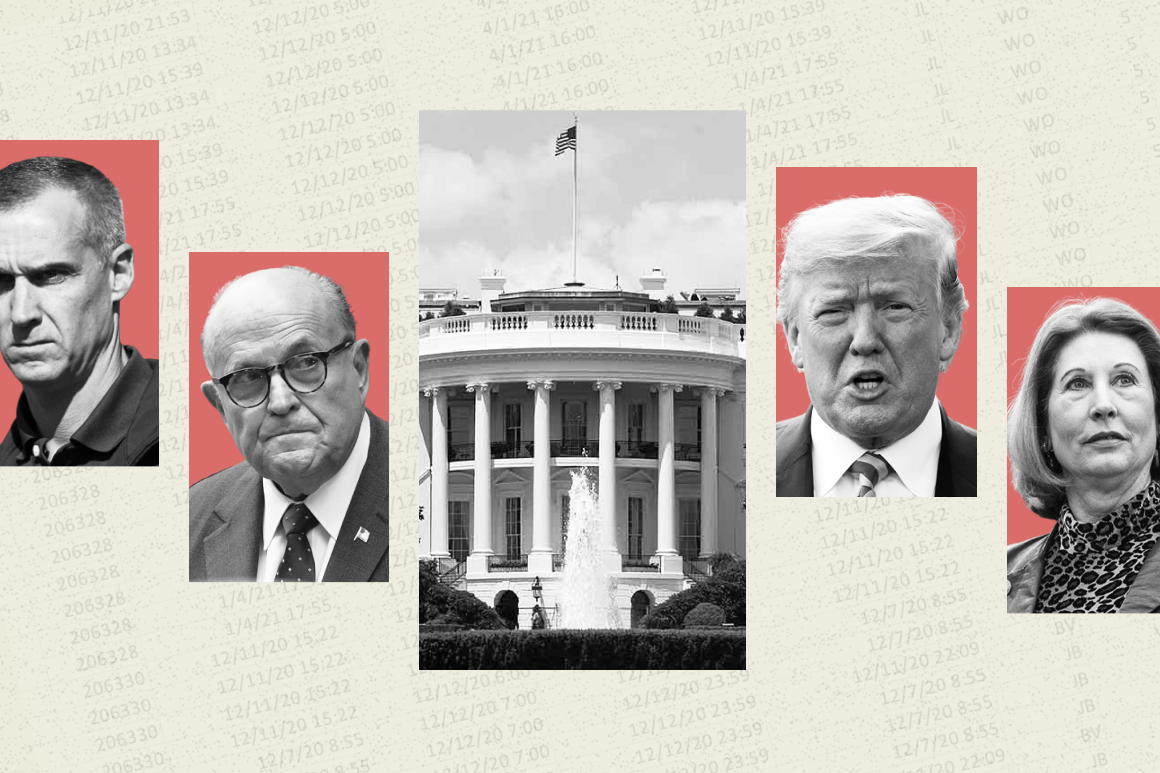 Donald Trump spent his time in office fighting the release of his White House visitor logs. Then came the Jan. 6 select committee.

In late December, the committee uploaded hundreds of documents as it wrapped up its exhaustive investigation into the attacks on the Capitol. Tucked into that release was an excel spreadsheet detailing seven full days of Trump’s White House visitor manifests.

Those logs capture key moments pertaining to the Jan. 6 probe, such as the Oval Office meeting on Dec. 18, in which outside advisers, including Sidney Powell and Patrick Byrne, discussed the prospect of seizing voting machines. They also offer a glimpse into dozens of other guests Trump was hosting during the final chaotic stretch of his presidency, from a Dec. 14 holiday reception featuring governors, Fox News personalities and donors, to a Dec. 18 Oval Office visit by country music singer/songwriter Lee Greenwood — whose music was a staple at Trump rallies — and his family.

The logs are not exhaustive. They only deal with a small period of the Trump presidency and do not include the specific purposes of the visit or details to identify the visitor beyond his or her name. For example, many people are listed as having met with Trump on Dec. 14 in the White House residence, though it’s likely they were in attendance at a larger holiday party.

Some of the entries contained in the Jan. 6 select committee’s publicly released document have been removed to address potential privacy concerns. In addition, we also removed records of White House tours, which was a significant portion of the data but rarely involved a visitor of public interest, save for very specific instances, like the tour taken by Proud Boys Chair Enrique Tarrio on Dec. 12.

Some visits were publicly known at the time. Others can be understood through the context in which they occurred, coming amid the Covid pandemic while the White House was shedding staff in anticipation of the transfer of power — at least among those outside Trump’s inner circle.

But even these limited snapshots provide a window into how Trump’s White House actually operated: with an eclectic mix of guests, political and apolitical, sifting in and out. For example, as five members of then-Rep. Devin Nunes’ (R-Calif.) staff on the House Intelligence Committee were ushered into the West Wing to review documents Trump intended to declassify, a wholly different set of guests were being brought into the building’s East Wing. As Jan. 6 approached, a number of artists and photographers stopped by the president’s personal residence — the purpose of which remains unclear.

If you see something interesting or noteworthy, drop us a line here.

LLiberal News
When Merrick Garland took center stage late last year to announce the appointment of a special counsel to…
LLiberal News
The Idaho Supreme Court upheld multiple state laws prohibiting abortion in the state on Thursday, ruling that there…
LLiberal News
A contingent of military officials is quietly pushing the Pentagon to approve sending F-16 fighter jets to Ukraine…
LLiberal News
They didn’t vote for it, they don’t like it and they’re working to undermine it — but Republicans…
LLiberal News
LLiberal News
The Justice Department has taken possession of a “small number” of documents with classified markings that former Vice…