Home Murphy, in State of the State, looks to ‘build the next New Jersey’ but pokes at DeSantis
LLiberal News

Murphy, in State of the State, looks to ‘build the next New Jersey’ but pokes at DeSantis 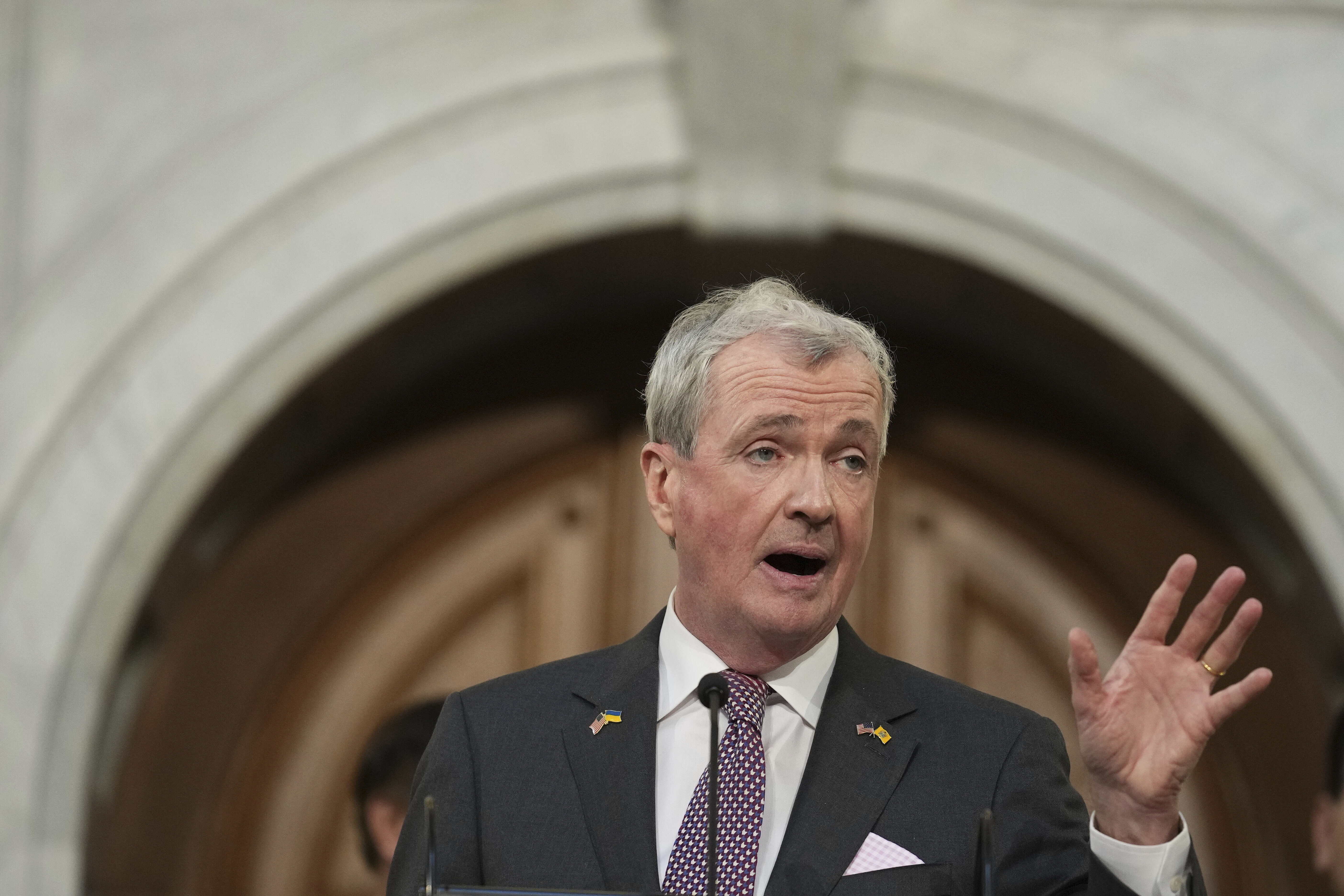 TRENTON, N.J. — New Jersey Gov. Phil Murphy, a term-limited Democrat with an eye on national politics, used his annual State of the State address Tuesday to sell his version of New Jersey after five years in office and draw contrast between the recent political chaos on the House floor in Washington and what happens in the Statehouse.

People “don’t want to see Washington-style dysfunction and chaos — and neither do we,” Murphy said near the start of his hourlong address to a joint session of the state Legislature.

Some national sweep was expected, Murphy is head of the National Governors Association and the Democratic Governors Association — perches others have used to run for a higher office. Murphy used the speech to elbowFlorida and its Republican governor, Ron DeSantis, saying New Jersey’s economic growth was outpacing Florida and “many of the so-called ‘business friendly’ states.”

“Some governors boast that their state is ‘where woke goes to die.’ I’m not even sure I know what that means,” Murphy said, referencing a phrase DeSantis often uses when describing his state.

But Murphy’s speech was not as nationally calibrated as DeSantis’ was in his inaugural address last week.

Murphy, a former ambassador to Germany who remains interested in foreign policy, opened the speech talking about the war in Ukraine. He praised “the bravery and strength of the people of Ukraine in fighting back against Russia’s barbaric aggression,” including four Ukrainian soldiers who were in the Assembly chamber for the speech as invited guests of First Lady Tammy Murphy.

Despite the pokes at national politics and international affairs sections, parochial issues largely ruled the day in the constitutionally required annual address that marks the beginning of the legislative session.

Murphy leaned heavily on talking points about “affordability,” making New Jersey “stronger” and “fairer” as well as efforts his administration has made to lower property taxes. This year, the governor added “safety” to his message, emphasizing his support for law enforcement and desire to combat crime as well as an aspiration to “build the next New Jersey” and make it “cool to be from New Jersey again.”

One of the longer sections of the speech was the governor’s plan to overhaul the state’s nearly century-old liquor law system. The new plan, first reported Tuesday morning in POLITICO’s New Jersey Playbook, would lift an existing cap on the number of licenses and allow municipalities to tack on their own local fees.

The governor also announced a deadline extension for his touted ANCHOR Property Tax Relief program allowing eligible residents to continue applying through Feb. 28. The program was one of the centerpieces of his 2022 agenda, but reports show only about half the state’s expected two million eligible residents have applied.

He also announced a plan, dubbed the Boardwalk Fund, to spend money to upgrade areas along the Jersey Shore. Murphy said he would unveil details of he plan during his budget address next month.

Murphy also promised to sign legislation to deal with car thefts, a crime that has become a major issue in the state and which he now calls a top priority.

The state will also roll out what the governor described as a “nation-leading” plan to make the life-saving drug naloxone available free and anonymously to anyone who walks into a pharmacy. The drug can treat an opioid overdose. The plan is to offer “anonymous and free access” to the drug, also known by the brand name Narcan, and could save countless lives, he said.

All of these issues will be batted around during an election year in which all 120 members of the Legislature will be on the ballot.

Tuesday’s address was the first in-person State of the State Murphy has delivered since the pandemic, though he gave an in-person budget address last year.

The speech, Murphy’s fifth State of the State since taking office in 2018, spent more time highlighting past wins than announcing new projects and programs.

Afterward, Democratic leaders offered something less than their full-throated endorsement.

Senate President Nick Scutari welcomed “the Governor’s continued focus on affordability and economic opportunity,” but said “we need to build upon the progress we have made in providing tax relief, affordable housing, job creation, debt reduction, credit upgrades and strategic investments that promote economic growth.”

Assembly Speaker Craig Coughlin said the “speech accurately captured the successes of the past five years.”

Both men committed to working with Murphy and their legislative colleagues to address policy priorities in the year ahead.

Senate Minority Leader Steve Oroho was not impressed by the speech. In a rebuttal address, the Sussex County Republican outlined some themes that his party hopes to use to retake control of the Legislature, where they are outnumbered 46 to 34 to in the Assembly and 24 to16 in the Senate.

Oroho faulted Murphy and the Democratic majority in both chambers for failing to “fix our broken unemployment and motor vehicle computer systems,” not doing enough to address “pandemic-related learning loss” in schools and signing a gun carry law which saw parts of it blocked by a federal judge yesterday.

“While they’re busy wasting billions on pet projects, they’ve failed to effectively manage the cost of benefits for hundreds of thousands of public workers,” Oroho said in a prepared speech meant to react to the governor’s address. “This year, that’s resulted in huge increases in health care premiums for local governments that will lead to spikes in property taxes across New Jersey.”

Last year, Murphy used his speech to praise New Jerseyans for their perseverance in dealing with the pandemic and pledged to sign an abortion rights bill, reaffirmed that he will not raise taxes this year and said he would send a plan to lawmakers to lower the cost of prescription drugs. He kept some of those promises, but his prescription drug plan has stalled.

But the governor ultimately viewed the State of the State as a chance to reflect as he enters the middle of the second term and heads into lame duck territory.

In contrast with other governors across the country, including DeSantis and Arizona Gov. Katie Hobbs who made education issues centerpieces of their inaugurals and State of the State speeches, Murphy did not spend any significant amount of time discussing education.

Without elaborating, he repeatedly asserted that “education is valued,” in the state and cited his administration’s total increase of more than $2 billion in education funding since he took office — an amount that still falls short of the constitutionally-mandated total required in the school funding formula.

This year’s budget address, which will be given in a month or so, will likely contain more announcements, keeping with Murphy’s use of the various major speeches he gives each year.

Daniel Han contributed to this report.

LLiberal News
PHILADELPHIA — The Pennsylvania GOP is trying to figure out what went so horribly wrong in 2022. After…
LLiberal News
NEW YORK — The Trump Organization was hit with $1.6 million in penalties in Manhattan state court Friday…
LLiberal News
ALBANY, N.Y. — New York’s concealed carry restrictions can be enforced as legal challenges continue, the Supreme Court…
LLiberal News
Union membership hit an all-time low in 2022 despite a surge in organizing efforts that emerged during the…
LLiberal News
Rep. George Santos’ congressional campaign reported dozens of transactions just cents below the threshold that would have triggered…
LLiberal News
As Kevin McCarthy got closer to the speakership, his new conservative supporters raked in more power. The GOP…