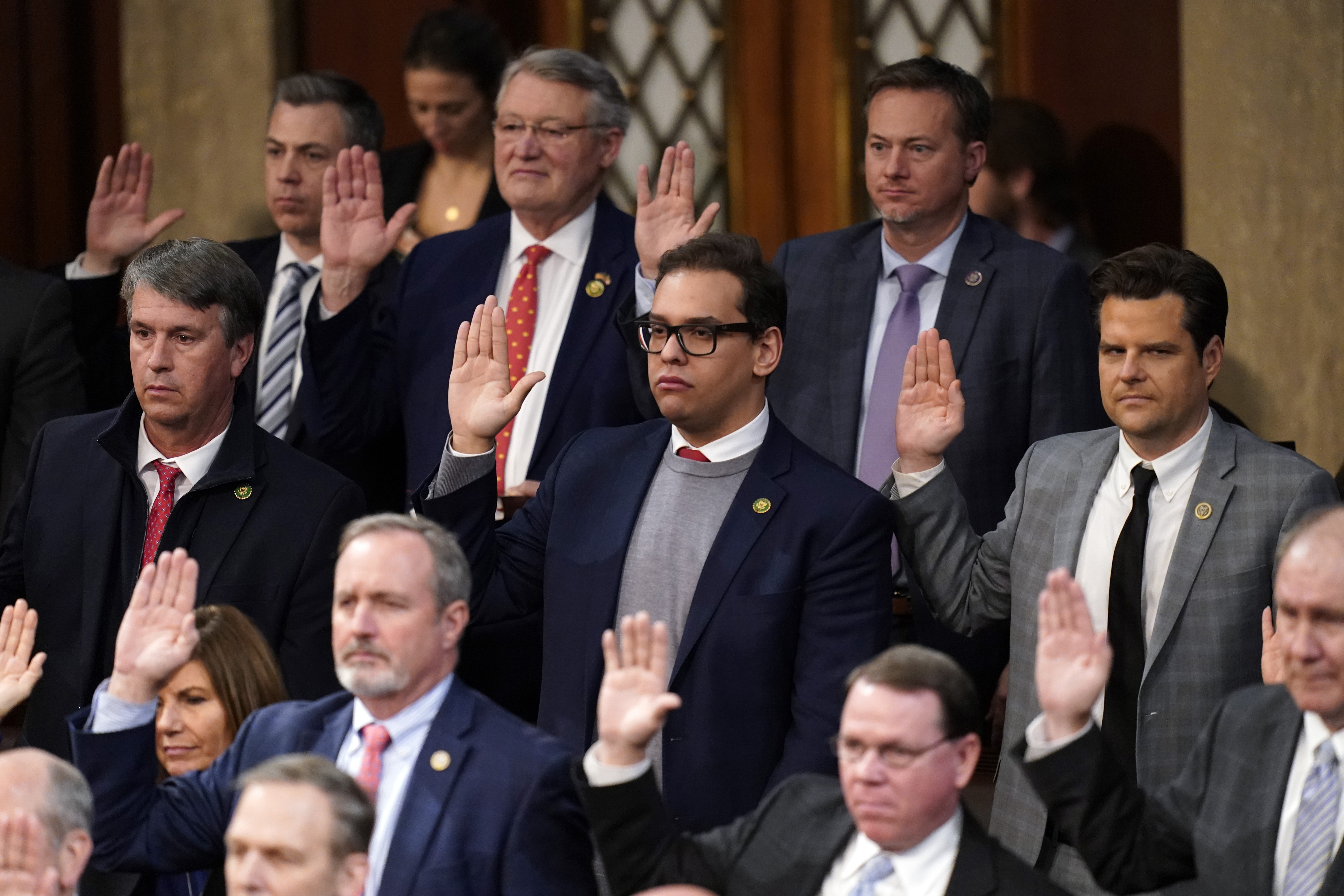 You might think that Congress is no place for a confessed liar under criminal investigation,like the recently sworn-in Rep. George Santos (R-N.Y.). But you’d be wrong.

Santos, who faces just-revived check-fraud charges in Brazil, has yet to be charged in the United States, but that may change soon. A nonpartisan watchdog group has filed a complaint with the Federal Election Commission accusing Santos of illegally concealing the source of campaign funds and of using donor cash to cover his personal rent. The Santos campaign also appears to have overspent on air travel, hotels and car services. Dozens of expenditures of $199.99 logged in disclosure forms — just a penny shy of the $200 threshold that requires receipts — hint at additional violations. If that isn’t bad enough, Patch just reported that Santos appears to have screwed the pooch by absconding with $3,000 from a GoFundMe set up for an ailing dog in Queens, N.Y.

If Santos worked anywhere else, he’d be wheeled out to the curb on trash day. But Congress is a great place to hang out and collect a paycheck if you’re charged with breaking the law. As nice as it would be to blame Santos on Donald Trump, who normalized lying and criminal behavior while in office, you can’t stick this one on the former president. Congress has long looked the other way when its members misbehave. More than two dozen members of the House and Senate have been charged with crimes since 1980, mostly for accepting bribes. In most cases, charged members put their heads down for the duration of their prosecution and resign if convicted (or decline to run for reelection). But they don’t have to resign. According to a Congressional Research Service report from 2014, no federal statute or House rule commands a lawmaker to leave Congress if indicted or convicted of a felony. Expulsion requires a two-thirds majority of the House, and only two convicted members have been expelled in modern times — Michael Myers of Pennsylvania and Jim Traficant of Ohio.

If Santos has checked the historical record — and you can bet he has — he would rightly figure that Congress is the best place for him to lounge for the next two years. And maybe beyond. At the end of December, POLITICO’s Olivia Beavers reported that Santos had told New York party leaders that he wouldn’t seek reelection in 2024. But last Friday, he fended off calls for his resignation by indicating he might seek vindication by running again. And why shouldn’t he keep his seat or run again? The job pays $174,000 a year and with five years of federal employment comes a nice pension. Plus, a House seat allows him to boss all those staffers around. And don’t forget franking privileges!

In normal times, Santos’ gross résumé inflation and other lies would earn him a cold shoulder from all Republicans. But these are not normal times. Given the party’s slim majority, every vote counts, even a liar’s vote. Santos wisely barnacled himself to Speaker Kevin McCarthy as quickly as he could, voting for him on all 15 ballots in the speaker race, and his loyalty has earned him two congressional committee slots — Small Business and Science, Space, and Technology. Santos is said to have coveted finance and foreign policy assignments, but small matter. He can always claim on his résumé that he got those committees. As long as the Republican leadership can count on Santos to vote the party line, he remains a net legislative asset for them.

New York state Republicans have denounced Santos because he makes them look bad, but it’s a different matter in the House. So far, only a handful of Republican lawmakers have demanded his resignation because if he were to resign, his district could easily swing Democratic, diminishing the tiny Republican majority.

“I will NOT resign!” Santos tweeted a week ago. This stand is more practical than principled. As Ben Jacobs noted in Vox, clutching his seat might give him some plea-bargaining leverage if and when federal prosecutors come calling. (Copping a plea spared Vice President Spiro Agnew jail time in 1973.) Santos might figure that surrendering his seat in Congress will only earn him a quicker seat in prison. The question only Santos can answer right now is how hefty is his criminal liability? Might his crimes be so expansive and easily proved that the feds will decline to offer him any sort of deal?

In the short term, we’re stuck with Santos. Serving in Congress is the best job he’s ever had. The Republicans need him. And members of Congress can’t be recalled. But in the long term, he’s toast.

LLiberal News
The battle between current chair Ronna McDaniel and challenger Harmeet Dhillon has divided GOP members.
LLiberal News
Gary Gensler, Washington’s chief cryptocurrency critic, has long been fed up with what he views as the market’s…
LLiberal News
Ukrainian cyber officials are gathering digital evidence for The Hague to prosecute, their top chief says.
LLiberal News
Rep. Scott Perry said that being under investigation shouldn’t disqualify him from taking part in any examination of…
LLiberal News
“We want to become a member of NATO because we don’t ever again want war in Finland,” says…
LLiberal News
Chancellor Olaf Scholz is likely to announce the decision as part of an address in German parliament on…