‘The most important election nobody’s ever heard of’ 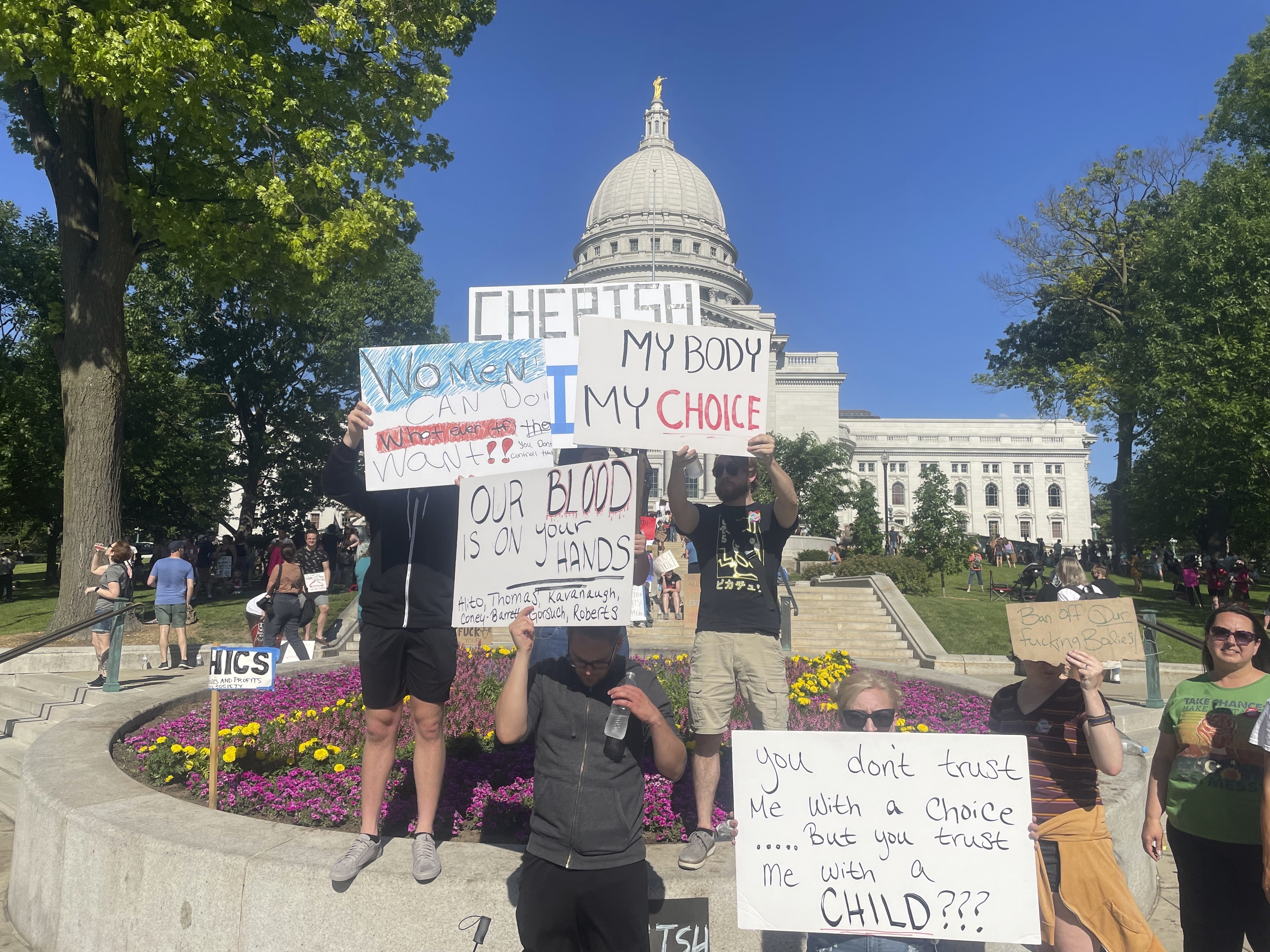 Control of the Wisconsin state Supreme Court is on the ballot this spring, and the contest could decide the fate of abortion rights, redistricting and more in the critical swing state.

Should a more liberal-leaning jurist win the job in the April election, it would flip the balance of the state’s highest court for at least two years.

There are significant policy outcomes hanging on the result. The court chose the state’s political maps for the decade after the Democratic governor and Republican Legislature deadlocked, and it’s likely to hear a case challenging Wisconsin’s 19th-century law banning almost all abortions in the near future. Wisconsin’s Supreme Court also decided major cases on election laws and voting rights before and after the 2020 presidential election.

“The 2023 Wisconsin state Supreme Court race is the most important election that nobody’s ever heard of,” said Ben Wikler, the chair of the state Democratic Party. “It has implications that will affect national politics for years to come, really at every level of government.”

Party organizations and ideological outside groups — both sides of abortion debate, for example, as well as labor groups — are planning to spend millions on advertising and activating extensive field networks. It will be the latest multimillion-dollar judicial race in recent years, which reflects both the outsize importance of the outcome and the increasing focus on contests further down the ticket — and away from Washington.

The court currently has a 4-3 conservative majority. But one of the conservative-held seats is open after Justice Patience Roggensack decided not to seek another term. Further scrambling the politics, another conservative justice — Brian Hagedorn, who was elected in 2019 — has sided with the liberal justices in the past on some high-profile cases.

“It is becoming clear the Democrats want to use the Supreme Court as a vehicle to circumvent legislators who actually make policy decisions,” said Mark Jefferson, executive director of the state Republican Party, ticking through a range of additional issues that could be in play at the court, from school choice to photo ID for voting and gun control measures. “If the liberals pick up another seat, they will have a rock-solid majority that never deviates from liberal activism.”

Voters must first navigate an unusual primary before choosing the new justice. There are four judges running for the position, which is technically nonpartisan, with two on either side of the ideological divide.

Former state Supreme Court Justice Daniel Kelly, who was appointed to a spot on the court by then-Gov. Scott Walker in 2016 before losing a 2020 election for a full term, and Waukesha County Judge Jennifer Dorow, who rose to prominence for her handling of the trial of the Waukesha Christmas 2021 parade attack, are running on the right. On the left, the candidates are Dane County Judge Everett Mitchell and Milwaukee County Judge Janet Protasiewicz.

The top two finishers in the Feb. 21 primary will face off in the April 4 general election. The split field raises the possibility that two ideologically similar candidates advance to the general election, as has happened in some recent congressional elections with all-party, top-two primaries. But most observers don’t think that is likely.

Still, the unusual primary dynamics have left many major players on both sides on the sidelines for now. Both state political parties are remaining neutral between their ideologically aligned candidates in the primary, and so is Gov. Tony Evers, a Democrat.

One notable exception there is Fair Courts America, a group supported by GOP megadonor Richard Uihlein. It has pledged its support — and “millions of dollars” — to Kelly.

Assuming two judges on opposite sides of the ideological spectrum advance in the primary, the general election is expected to revolve around clear differences on redistricting and abortion policy.

On redistricting, the court ultimately selected a congressional map drawn by Evers. But it was one that leaned Republican anyway, after the court called for a new map that hewed as closely as possible to the old one. A similar and more protracted fight also broke out over legislative lines — and more challenges to the maps could arise in future years, especially if the balance of the court flips.

“I think it is huge,” Evers said in an interview on the sidelines of the Democratic Governors Association winter meeting last month, specifically citing the redistricting battle. “The Supreme Court has leaned conservative on almost all of the issues. So yes, this is a big deal.”

National party groups that are heavily involved in the redistricting fight — such as the Republican State Leadership Committee and the National Democratic Redistricting Committee — are also planning to play in the race.

Wisconsin’s race has also taken on increased importance for pro- and anti-abortion rights groups in the wake of two decisions this month from the Idaho and South Carolina state Supreme Courts, which recently heard cases on the states’ abortion restrictions. A near-total ban was upheld in Idaho, but a law preventing the procedure after about six weeks of pregnancy was thrown out in South Carolina.

The issue could come in front of the Wisconsin court soon. State Attorney General Josh Kaul, a Democrat, has sued to overturn the state’s 1849 law that makes abortion illegal in almost all circumstances. While that case is winding its way through the courts, abortion providers have stopped performing the procedure because of ambiguity around enforcement of the law.

Stephen Billy, vice president of state affairs at Susan B. Anthony Pro-Life America, an anti-abortion group that spent $600,000 on North Carolina state Supreme Court races in the fall, said his organization is also planning to invest in the Wisconsin Supreme Court race. It’s part of the group’s growing spending on state-level races in the post-Roe era, he said, “to make sure that Wisconsin doesn’t end up with a fabricated right to abortion decided by activist judges.”

Democrats, in particular, are likely to focus on the issue to drive voters to the polls. Wikler, the state party chair, called the contest a de facto ballot initiative on a “statewide abortion ban,” citing the likelihood of court arguments on the 1849 law.

Planned Parenthood, the pro-abortion rights mainstay, is planning to spend six figures on the Wisconsin Supreme Court race, between national and local affiliate investments. The organization, in conjunction with other partner groups, is planning voter education campaigns, a GOTV drive and independent expenditure advertising for the general election.

Both sides say the issue is expected to become much more prominent in the general election. Ahead of the primary, Wisconsin Right to Life, another anti-abortion group, is working to educate its members on the importance of the race. But Gracie Skogman, the group’s legislative and PAC director, said the group will be “much more focused” on the general election.

“The unfortunate news is the majority of voters that we have interacted with are not aware of the stakes of the election, the candidates who are on the ballot, the views of the candidate, or the tie between our current pro-life statutes and the results of the election,” Skogman said. “From our perspective, there’s a long way to go.”

LLiberal News
BEIJING — People across China rang in the Lunar New Year on Sunday with large family gatherings and…
LLiberal News
Kevin McCarthy will be speaker of the House after eking out a majority on the 15th ballot, ending…
LLiberal News
Ron Klain’s impending departure as President Joe Biden’s chief of staff creates a rare opening at the top…
LLiberal News
Democrat Lucas Kunce is mounting a bid against Sen. Josh Hawley, the Missouri Republican whose attempt to overturn…
LLiberal News
They’re two of the most iconic images from the riot at the Capitol following the 2020 presidential election:…
LLiberal News
A new CDC study has found that the Covid-19 bivalent booster reduces the risk of symptomatic infection from…