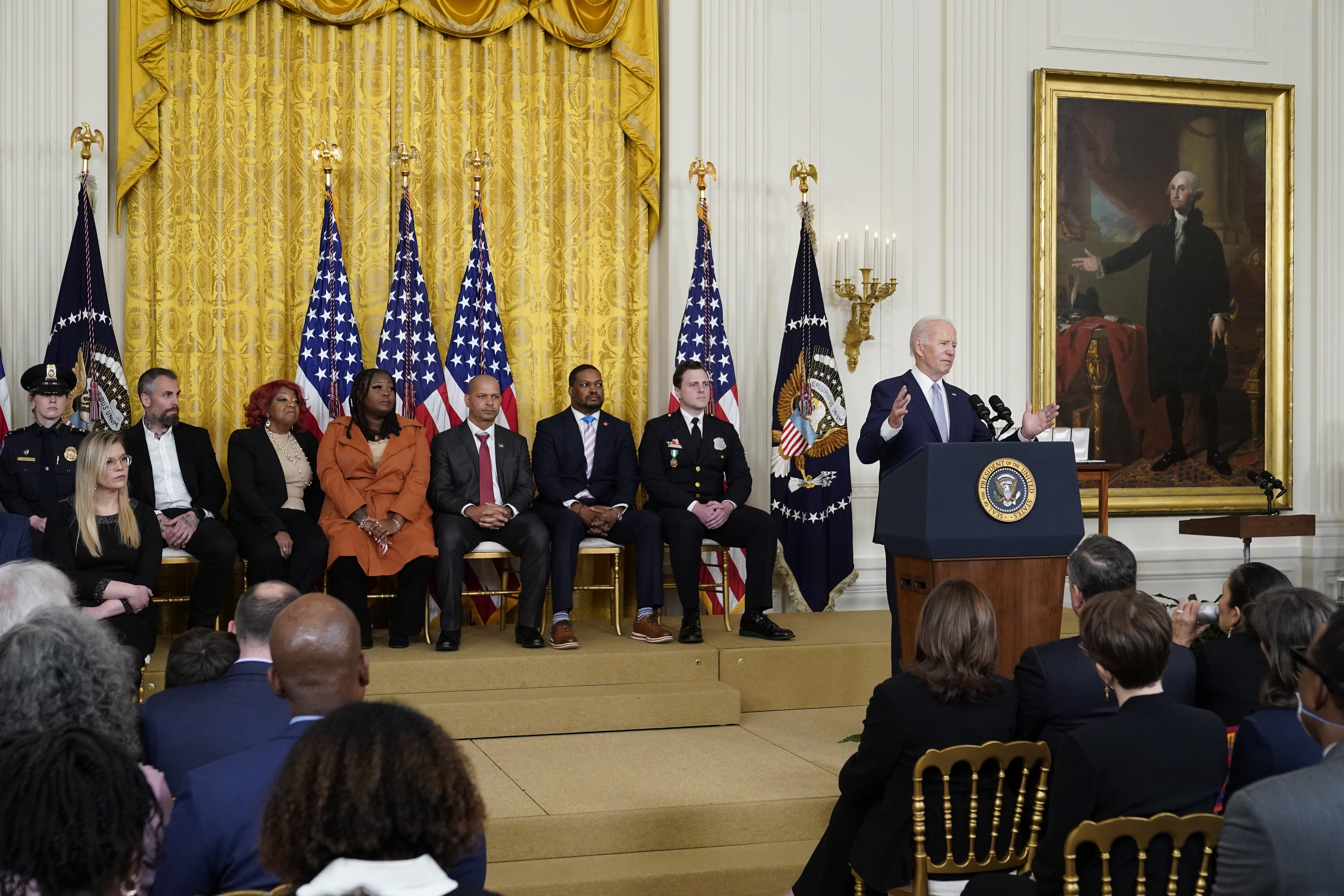 Marking the second anniversary of one of the nation’s darkest days, President Joe Biden paid tribute Friday to the heroism displayed on Jan. 6, 2021, while also warning that the forces that fueled the violence at the U.S. Capitol still lurk.

Biden touted the nation’s healing over the last two years but condemned the riot at the very citadel of the nation’s democracy. He derided the mob “as sick insurrectionists” who wreaked havoc and drew blood in the name of Donald Trump.

“All of it was fueled by lies about the 2020 election,” Biden said. “But on this day two years ago, our democracy held. We the People, as our Constitution refers to us, ‘We the people’ did not flinch.”

Biden also honored 14 Americans who stood up for democracy after the 2020 election, awarding medals to members of law enforcement, including Capitol Police officers who held off rioters, as well as election officials who stood their ground in the face of Trump’s onslaught of lies.

Two years later, the images from that day remain horrifying. The scene that unfolded — mobs pushing through police barricades, breaking windows, then occupying seats of power — was one that Americans are accustomed to watching in distant lands with authoritarian regimes.

But Biden made clear that the violence — which included gunshots fired in the Capitol, one death, and an armed occupation of the Senate floor — was born from the man who swore an oath to protect the very democratic traditions that rioters tried to undo in his name.

“Our democracy was attacked. The U.S. Capitol was breached, which had never happened before in our nation’s history, even in the Civil War,” said Biden, who warned that the anti-democratic forces had not subsided.

“We know it could happen again,” Biden said. “There’s no guarantee. Except for us. Except for all of you.”

The event, emotional at times, largely focused on those who sacrificed so much that day. Biden described in vivid detail the assaults at the capital and awarded one of the nation’s highest civilian honors to several law enforcement officers, including Michael Fanone, Harry Dunn and Eugene Goodman.

Others hailed were local officials such as Russell “Rusty” Bowers, the former speaker of the Arizona House of Representatives, as well Georgia poll workers Shaye Moss and Ruby Freeman, who both withstood threats on their lives from Trump supporters in the weeks after the 2020 election.

Three of the medals given to law enforcement officers were done so posthumously: Brian Sicknick and Howard Liebengood of the U.S. Capitol Police and Jeffrey Smith of the District of Columbia Metropolitan Police. Sicknick suffered a stroke the day after the riot; both Smith and Liebengood died by suicide in the wake of the insurrection.

“All of America watched it on television. America owes you,” the president said. “It owes you all a debt of gratitude, one we can never fully repay unless we live up to what you did.”

Trump spent the end of 2020 declaring the election was “rigged” and making baseless accusations of widespread voter fraud that numerous federal courts and senior members of his administration said did not exist. Trump was enabled by dozens of fellow Republicans willing to object to the count, a maneuver they knew would delay but not change the outcome.

This year, the Jan. 6 anniversary fell at a moment of political opportunity for Biden. He addressed the nation at the same time the Republican-led House of Representatives remained in chaos trying to to choose its next speaker, and Trump, the GOP’s only declared presidential candidate to date, continued to espouse widely-rejected election denialism.

Homegrown threats against the nation’s democracy have been a familiar theme for Biden, who launched his presidential campaign because he felt Trump was tearing at the nation’s fabric.

As the general election campaign ramped up last fall, Biden delivered a pair of speeches urging vigilance against violent anti-democratic forces, one set against the backdrop of Independence Hall and the other, just days before the midterms, coming after the brutal assault of House Speaker Nancy Pelosi’s husband.

Though the midterms have passed and the House Jan. 6 committee has all but finished its work, Biden will continue to sound the alarms in the months ahead, believing the threat has not dissipated.

The president’s speech Friday came as House leadership remained in limbo, with a right-wing faction of the GOP paralyzing the process to select a speaker. Many of those same lawmakers — as well as others expected to play prominent roles in the new Congress — voted against Biden’s certification and have pushed false claims of election fraud.

And while many of the most prominent election deniers lost in November, West Wing aides also point to Trump’s shadow looming over the political landscape. Though the former president has been politically weakened in recent months, many close to Biden believe Trump will still emerge as the GOP presidential nominee next year. As Biden takes steps to likely launch his own campaign in the coming months, some in his orbit are preparing to make Jan. 6 a central issue in the campaign.

Eli Stokols contributed to this report.

LLiberal News
The prime minister acts after Whitehall probe finds “a serious breach of the ministerial code.”
LLiberal News
The Pentagon is considering providing back pay to former service members who were discharged for refusing to get…
LLiberal News
It is not clear what caused the crash.
LLiberal News
NEW YORK — It’s time for Rep. George Santos to go, Mayor Eric Adams said Friday. Adams, who…
LLiberal News
When Lloyd Cotler worked on texting programs for Hillary Clinton’s 2016 presidential campaign, it was a relatively new…
LLiberal News
Moscow will need many more combat soldiers to achieve the three-to-one ratio necessary for an attacking force.