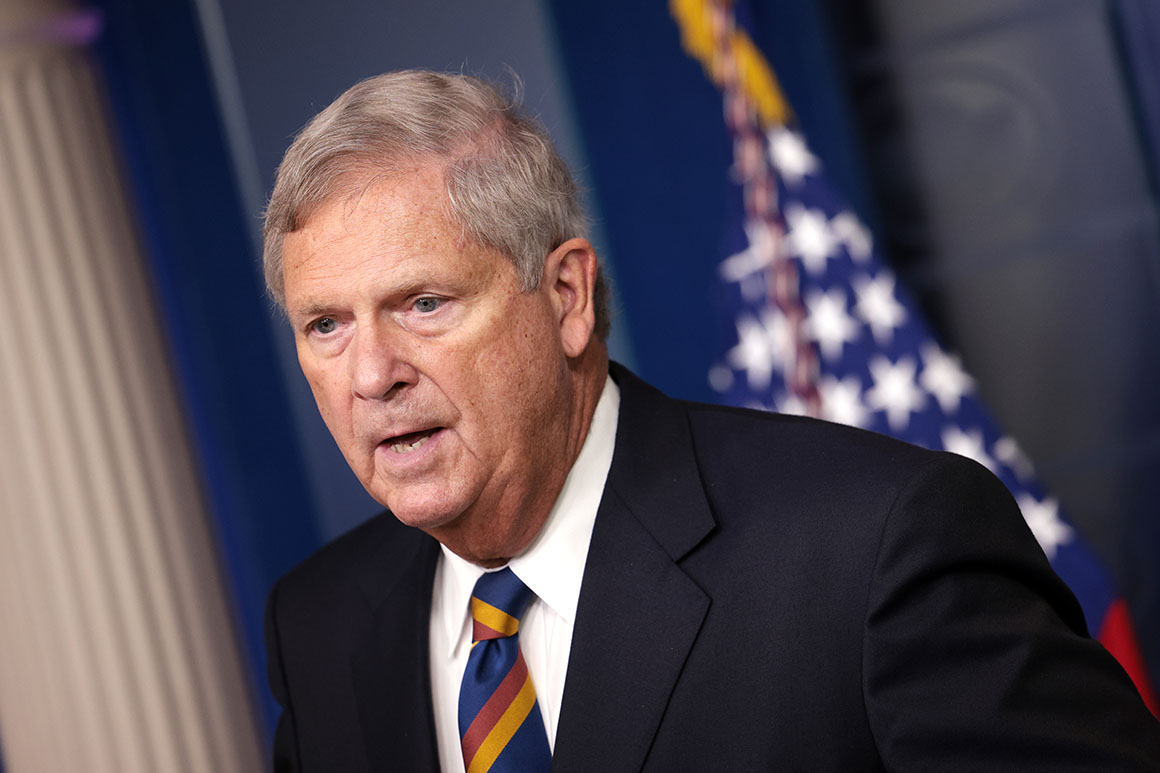 Democratic lawmakers had repeatedly urged the USDA to stop buying meat from JBS USA after the company’s parent, J&F Investimentos S.A., paid a $256 million fine to the U.S. in 2020 to resolve charges of bribing Brazilian officials.

But in a Nov. 2 letter obtained by POLITICO through a federal Freedom of Information Act request, Vilsack said barring JBS USA from government contracts could hurt taxpayers because the company has so few competitors.

“Removing a firm from government-wide procurement would potentially impair competitive choice for the taxpayer in securing affordable food for the range of needs that government must provide for, from school lunches to meals for our soldiers,” Vilsack wrote. He was responding to a June 2022 request from former House Oversight Chair Carolyn Maloney (D-N.Y.) demanding that he review contracts with JBS USA.

Vilsack’s letter illustrates how the government’s options have become painfully limited in an agriculture sector heavily concentrated on everything from poultry to cereal. JBS, the world’s largest meatpacker, conducts extensive business with the federal government. The company’s subsidiaries and contractors have had other problems. Poultry company Pilgrim’s Pride, a JBS USA subsidiary, pleaded guilty in 2021 to federal price-fixing charges, paying more than $100 million in fines. Lawmakers have also complained about the foreign-owned company’s receipt of millions in pandemic bailout money.

“While many Americans are struggling to put food on their tables, it is troubling to see taxpayer dollars going to a major agribusiness that has such an egregious record of legal violations,” Maloney wrote in her letter to Vilsack.

Since the verdicts against the company’s parent and subsidiary, USDA has awarded $25 million in government contracts to JBS USA and $35 million in contracts to Pilgrim’s Pride, Maloney wrote.

Overall, JBS has received nearly $400 million in federal contracts since October 2017 for providing food and services for programs including nutrition assistance, school and summer meal programs as well as food banks, a USDA spokesperson said.

Vilsack said USDA considered “suspension or debarment proceedings regarding JBS USA” given the legal issues of its parent company and subsidiary but had decided as far back as February 8, 2021, not to proceed. He said the review focused on whether the company’s performance as a government contractor put the taxpayers at risk. Debarment, he added, is prohibited as a “punishment.”

Under the lawgoverning federal purchases of supplies and services, a contractor may be cut off from federal contracts for conduct including antitrust violations or bribery.

“We are hard at work making investments to expand the number of competitors in food and agriculture markets and diversify the nation’s meat supply, enhancing transparency for poultry growers, increasing value for producers and consumers through stronger local and regional food systems, and diversifying our procurement suppliers,” a USDA spokesperson said in a statement.

A spokesperson for JBS USA said the company was aware of Maloney’s letter, but not of anything that followed. “It is a privilege to participate in federal food assistance programs that help alleviate food insecurity and provide meals to Americans in need,” said spokesperson Nikki Richardson. “The eligibility of participants is the sole discretion of USDA.”

As part of its review, USDA also considered JBS USA and its affiliates’ significant role in the American economy and already-strained food supply chains. Vilsack pointed to “fragility in the market,” including high inflation. Should USDA cut ties with JBS USA, the company would no longer be allowed to contract with any federal agency, not just the Agriculture Department.

Vilsack emphasized that the company’s market power underscored the need for USDA’s efforts to increase competition in the marketplace, pointing to the department’s rulemakings and $1 billion in spending to increase meat and poultry processing capacity. USDA has also worked to “diversify” the sources from which it buys, he wrote.

“This case highlights the urgency of USDA’s multi-billion efforts, noted above, to increase the competitive choices in meat and poultry processing — competition that would benefit taxpayers, consumers, and producers alike,” Vilsack wrote.

Just four companies control the majority of beef, pork and poultry markets. When JBS USA experienced a cyberattack in 2021 that shut down its processing plants, the dip in supply sent shock waves throughout the food supply chain. Similarly, a 2017 fire temporarily shuttered a Tyson plant in Holcomb, Kan., affecting roughly 5 percent of beef processed every day.

It’s not the first time JBS USA has come under congressional scrutiny. In 2019, Rep.Rosa DeLauro (D-Conn.)sent a letter to then-Agriculture Secretary Sonny Perdue demanding that USDA investigate JBS and its U.S. subsidiaries, citing the company’s use of federal money and its continued acquisition of competitors.

Perdue demurred, and in 2020, DeLauro renewedher calls for an investigation and for USDA toimmediately begin proceedings to suspend and debar JBS USA and its subsidiaries. In her second letter, DeLauro pointed to a 2017 inspector general review of the USDA’s suspension and debarment process that recommended the agency “do more” to ensure ethical business relationships for the government.To date, DeLauro has not yet received a response from USDA.

Separately, Sens.Marco Rubio (R-Fla.) andBob Menendez (D-N.J.) have twice urged the Committee on Foreign Investment in the United States to conduct a formal review of the transactions of JBS and its affiliates.

Vilsack’s letter came just weeks before the Department of Labor filed a complaint for child labor violations against a contractor JBS USA used at its meat processing facilities. According to the complaint, the contractor, which provided food safety sanitation services, hired at least 31 children — several of whom sustained severe injuries.

LLiberal News
MEXICO CITY — Joe Biden has no shortage of topics to tackle in his first presidential trip to…
LLiberal News
Federal Reserve Chair Jerome Powell on Wednesday welcomed signs that inflation has been steadily cooling, but he had…
LLiberal News
Nebraska Gov. Jim Pillen has appointed Pete Ricketts, the state’s former GOP governor, to fill retired Sen. Ben…
LLiberal News
The cost has been unbearable. But the deep sacrifices and hard-won battlefield successes of the people of Ukraine…
LLiberal News
The U.S. supports blocking Russian and Belarusian athletes from the 2024 Olympics unless it is “absolutely clear” that…
LLiberal News
Chancellor Olaf Scholz is likely to announce the decision as part of an address in German parliament on…