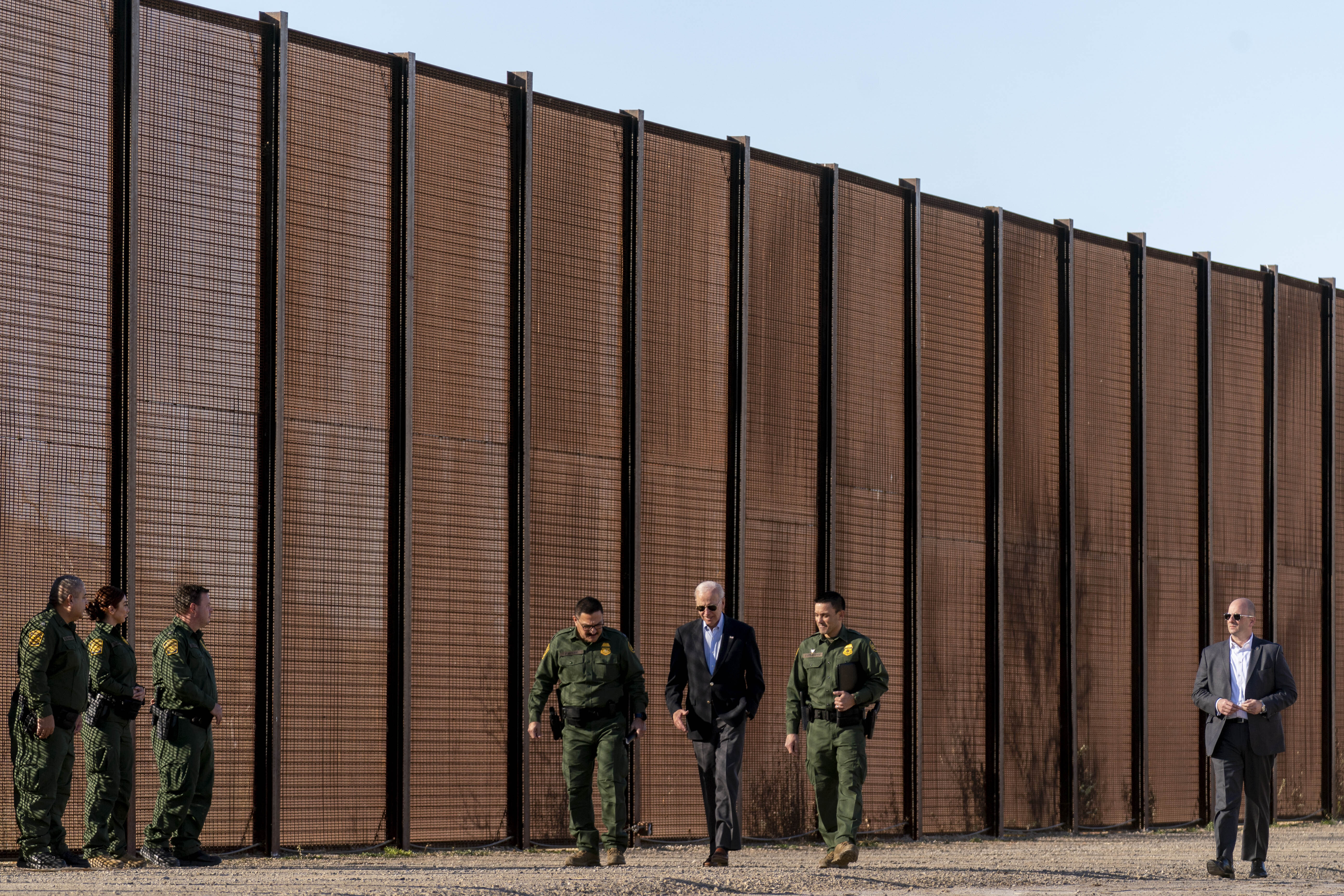 MEXICO CITY — Joe Biden has no shortage of topics to tackle in his first presidential trip to Mexico.

There’s the major shift in border policy that came just days before the trip. There’s the arrest of an alleged drug trafficker in Mexico long sought by U.S. authorities. And there’s the border itself, which Biden visited for the first time as presidentwhen he made a stop in El Paso, Texas, on Sunday evening.

All that casts a shadow over the president, who arrived in Mexico City hours after the El Paso swing. Biden’s Monday and Tuesday schedule at the North American Leaders’ Summit is packed: One-on-one discussions, trilateral meetings, working lunches, dinners and, of course, photo opportunities.

“We have a big agenda that ranges from the climate crisis to economic development and other issues. But one important part of that agenda is strengthening our border between our nations,” Biden said during a speech Thursday on border security at the White House.

Biden will be the first U.S. president to visit Mexico since Barack Obama in 2014. For decades, presidents traditionally made their first overseas trip to either Mexico or Canada as a sign of solidarity among the trio of leaders. Often, the “Three Amigos” would pledge to be a (mostly) unified North American front. But that informal tradition ended in 2017 when President Donald Trump opted to make Saudi Arabia his first international destination. And then, with the globe in the grasp of the Covid-19 pandemic, Biden delayed his first foreign trip for nearly five months before traveling to the United Kingdom to meet with G-7 leaders in June 2021.

Since then, Biden has crisscrossed the globe to several world summits. But he had yet to make the trip south of the border. And while Biden has met with Canadian Prime Minister Justin Trudeau repeatedly, he’s spent far less time with Mexican President Andrés Manuel López Obrador, which has only added to the feeling in Latin America of being snubbed by the United States.

That has added another layer of pressure to this week’s long-awaited gathering, as the three leaders prepare to discuss key issues including border security, trade and economic development, and climate and energy.

The Biden administration rolled out several new policies to curb illegal migration last week, some of which rely on Mexico’s cooperation. Immigration will be atop the president’s agenda, but stopping the flow of fentanyl from Mexico will also be a priority as the drug and other lab-produced synthetic opioids now drive an overdose crisis deadlier than any the U.S. has ever seen. It’s a pressure point that Biden may be forced to address even asdrug control advocates and experts say an anti-drug policy that relies on tighter border security is far from certain to work.

“Mexico already has taken significant steps … arresting Mr. [Ovidio] Guzmán, a key fentanyl trafficker. That is not an insignificant accomplishment by Mexican authorities. And we’re certainly grateful for that,” White House National Security Council spokesperson John Kirby said on Friday. “So we’re going to continue to work with them in lockstep to see what we can do jointly to try to limit that flow.”

There are other, equally weighty matters that the leaders are expected to address. Both Canada and the U.S. have raised concerns about Mexican energy policies that they say discriminate against foreign investors in the fossil fuel and renewable energy sectors. The three countries have been discussing a possible negotiated settlement for months without success, raising the possibility that Canada and the United States could soon ask for a dispute settlement panel to hear their complaint.

But competitiveness and trade might be the most important issues on the table, said Roberta Jacobson, Biden’s former border czar and an ambassador to Mexico under Obama. Biden and Trudeau are headed to Mexico during a time of increased trade frictions between the three North American trading partners in the area of autos, energy and agriculture.

Both Canada and Mexico have accused the United States of adopting an overly stringent interpretation of the automotive trade rules in the two-year-old USMCA agreement, making it harder for cars produced in the two countries to qualify for U.S. duty-free treatment.

A dispute settlement panel is expected to release a decision in favor of Canada and Mexico in the days following the summit, raising concerns over whether the Biden administration would drop its strict interpretation to comply with the ruling. If not, it could face Canadian and Mexican retaliation in the year ahead.

The disputes don’t end there. The U.S. remains frustrated over Canadian dairy market access barriers, while Canada complains about duties the United States has imposed on softwood lumber shipments the U.S. says are unfairly priced and subsidized. And U.S. farmer groups and members of Congress also want the Biden administration to begin dispute settlement proceedings against Mexico over a decree López Obrador issued in 2020 that threatens to cut off U.S. corn exports to that country. 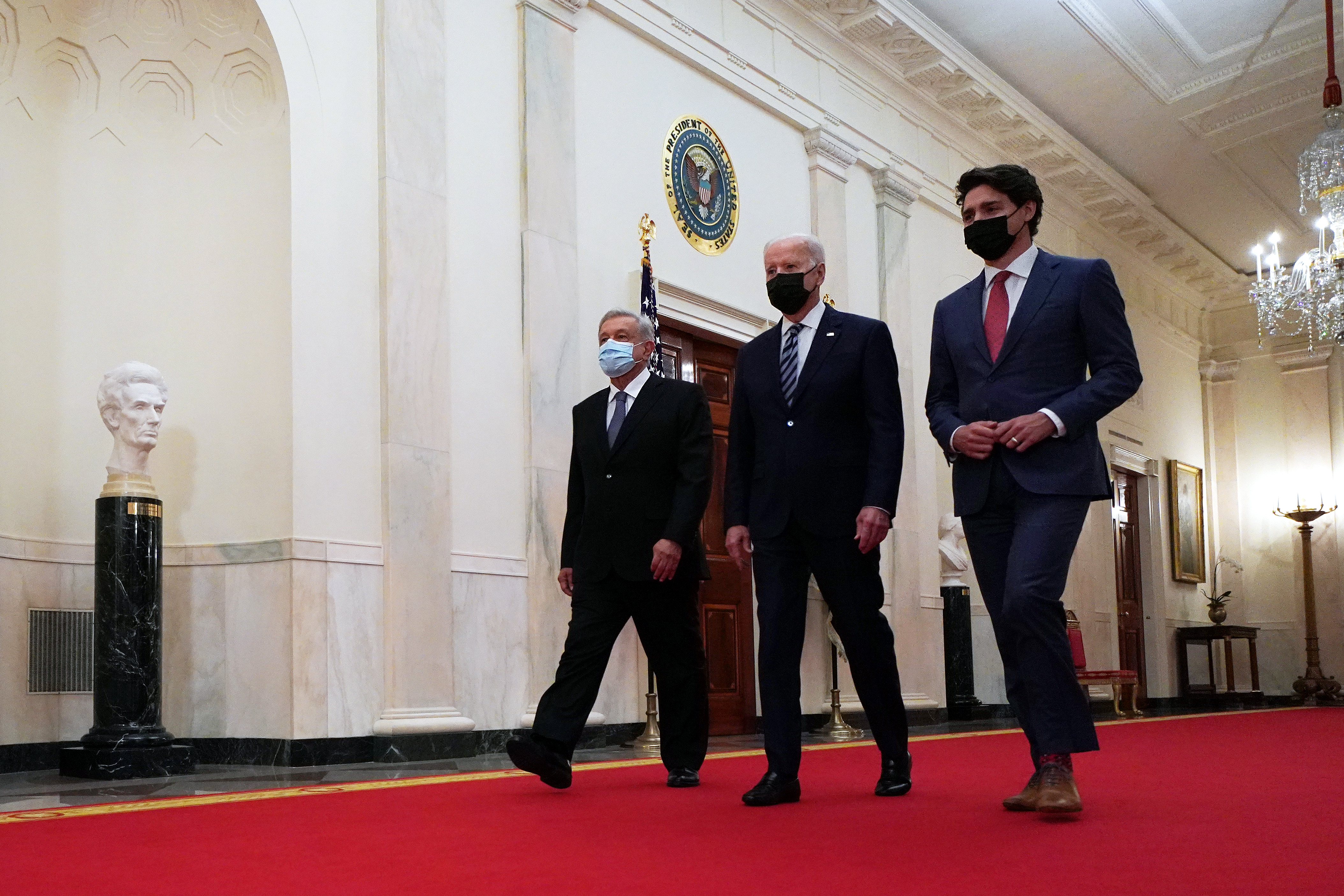 The leaders’ interactions will also be closely watched. While Biden and Trudeau are often on the same page, Jacobson said, there’s greater tension hovering over the U.S.-Mexico relationship. And it’s not uncommon for López Obrador to take a rhetorical jab at the U.S. during one of his press conferences.

Over the summer, the Mexican president skipped the Summit of the Americas in Los Angeles after the U.S. opted against inviting the autocratic nations of Cuba, Nicaragua and Venezuela, citing their human rights records. That inflamed other nations in the region, prompting López Obrador to skip the summit and send his foreign minister instead. Other nations also boycotted while some that did come, including the leaders of Belize and Argentina, upbraided Biden for excluding their neighbors.

It was a shaky start to hemispheric relations, but one that has come to define, in part, the Biden approach: incremental progress and no major missteps. The administration avoided a debacle and felt good leaving with some trade and refugee agreements reached.

“President Biden understands — not that he always has to turn the other cheek — but that ultimately for the good of the American people and our economic prosperity, rising above that noise to try and maintain a productive relationship,” Jacobson said. “It’s so important that he does that.”

Doug Palmer contributed to this report.

LLiberal News
The Baltic states have incurred the wrath of their large neighbor.
LLiberal News
California Gov. Gavin Newsom is proposing to cut billions of dollars in climate spending and delay funding of…
LLiberal News
They held a 140-second moment of silence in an “acknowledgement of the 140 officers who were seriously injured…
LLiberal News
Both Western security analysts and pro-war Russian ultranationalists are skeptical the reshuffle will lead to game-changing tactics or…
LLiberal News
Congress’ influential Blue Dog Coalition is getting chopped nearly in half after an internal blow-up over whether to…
LLiberal News
A bipartisan Senate Judiciary Committee tore into Ticketmaster following the debacle last fall over Taylor Swift concert tickets.