Amid unrest, Iran’s hardliners turn their anger to France 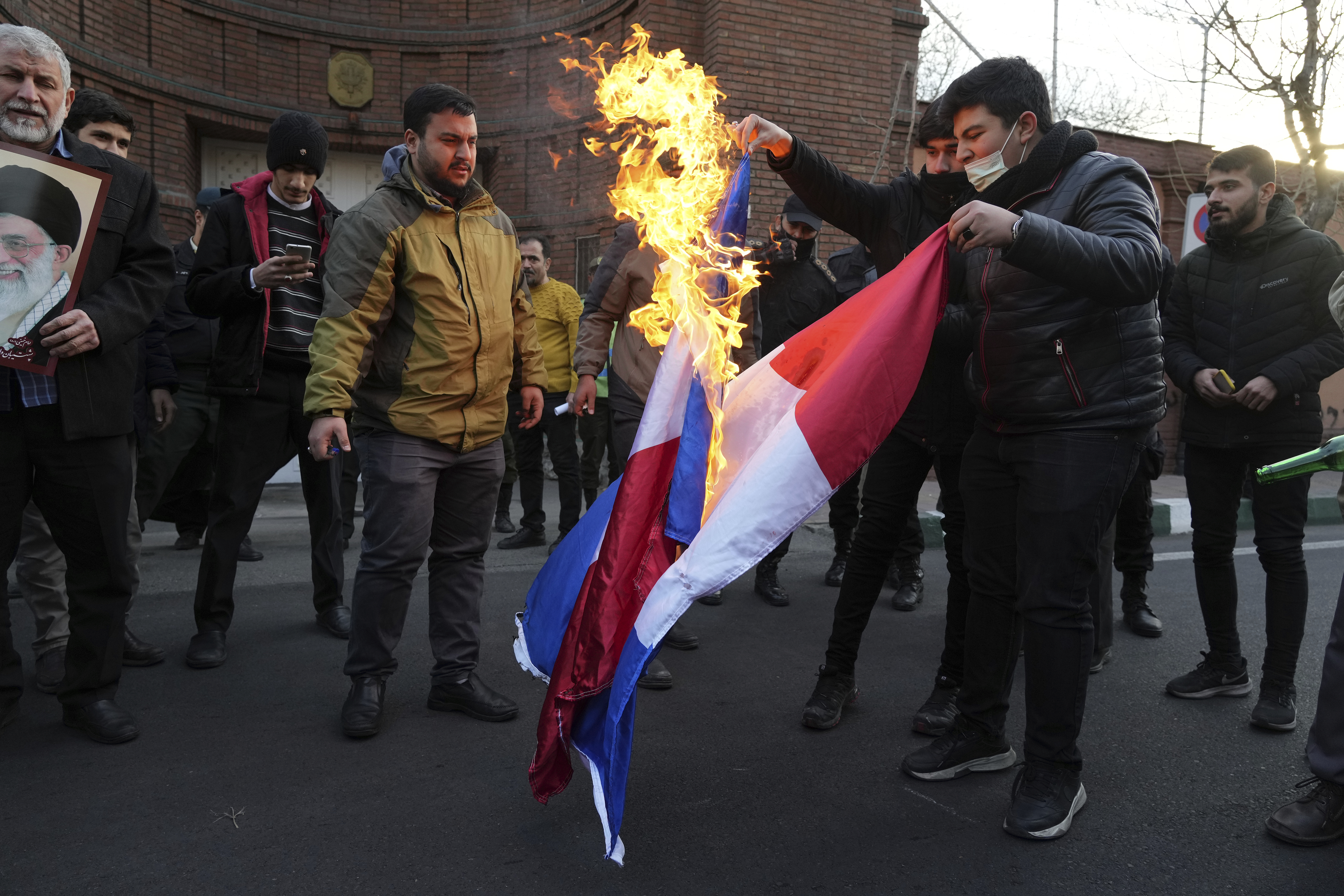 DUBAI, United Arab Emirates — Iranian hardliners on Sunday burnt France’s flag outside of its embassy in Tehran where they were protesting cartoons published by the French satirical magazine Charlie Hebdo that lampoon Iran’s ruling clerics.

The Charlie Hebdo caricatures largely aligned the Paris-based magazine with the demands of anti-government protests that have swept Iran calling for the downfall of its Islamic Republic and challenged its hardline establishment.

The demonstrations outside of the French embassy follow previous attempts by Iran’s rulers to mobilize their supporters in counter-demonstrations.

Hundreds of protesters including students from seminary schools shouted “Death to France” and accused French President Emmanuel Macron of insulting Iran while urging Paris to stop “animosity” toward Tehran. Police, some of whom appeared holding images of Iranian Supreme Leader Ali Khamenei, kept the demonstrators at a distance from the embassy building.

Supporters of Iran’s hardline leaders usually aim their protests and flag burning against the U.S. and its Stars and Stripes, but targeting France’s Tricolor is rare.

State television said some clerics held similar protests in the shrine city of Qom, the center of religious learning in Iran.

Iranian parliamentary speaker Mohammad Bagher Qalibaf on Sunday linked the French magazine’s cartoons with what officials have repeatedly alleged is the West’s plot to spread “riots” in Iran.

Later in the day, President Ebrahim Raisi offered his first reaction to the French cartoons and echoed similar claims. “Resorting to insults on the pretext of freedom is a clear indication of their frustration in concluding plot for chaos and insecurity” in Iran, he said.

Anti-government protests erupted across Iran in September after the death in custody of Mahsa Amini, a 22-year-old woman who had been detained by the country’s morality police for allegedly violating its strict Islamic dress code.

The unrest has grown into one of the severest challenges to the Islamic Republic since the 1979 revolution that brought it to power. Human rights groups say that at least 517 protesters have been killed and over 19,200 people have been arrested amid a violent crackdown by security forces. Iranian authorities have not provided an official count of those killed or detained.

On Saturday, authorities executed two men convicted of allegedly killing a paramilitary volunteer in the demonstrations.

The Saturday hangings made it four people known to have been executed since the unrest began in September over the death of Amini. All of the sentences were handed out in rapid, closed-door trials that have been met with international criticism.

Sunday was also the third anniversary of the Iranian Revolutionary Guard’s downing of an Ukrainian passenger plane with two surface-to-air missiles, killing all 176 people on board — a tragedy that ignited an outburst of anger across Iran. Tehran initially denied responsibility for downing the airplane before admitting to having mistakenly done so amid high tensions with the U.S.

An Iranian court has yet to issue a verdict three years into the trial of 10 military personnel who have not been publicly identified but are allegedly implicated in the plane’s downing.

Families of the victims met on Sunday at the site of the crash to hold a memorial ceremony separately from an official commemoration organized at Tehran’s international airport, which had been the point of departure for the flight.

In a separate development on Sunday, a court sentenced Faezeh Hashemi, daughter of former president Akbar Hashemi Rafsanjani, to a five years prison term for “propaganda against the system,” Iranian media reported.

The outspoken and pro-reform Hashemi was in prison since late September after she was arrested by security forces for supporting protests that have been led by women opposing the mandatory headscarf or hijab under the Islamic Republic.

In 2011, Hashemi was convicted and served five years in prison over similar security charges.

Iranian officials have continued to claim the monthslong protests are being driven by foreign agents but have offered no proof.

Following Charlie Hebdo’s publishing of cartoons mocking Iranian clerical figures, authorities in Tehran shut down on Thursday a decades-old French research institute and called the closure a “first step” in their response.

LLiberal News
https://www.politico.eu/article/greta-thunberg-removed-by-german-police-from-lutzerath-protest-site/
LLiberal News
The war on inflation may be far from over, but the economy has reached a key, little-noticed milestone:…
LLiberal News
The Justice Department has taken possession of a “small number” of documents with classified markings that former Vice…
LLiberal News
President Biden’s personal attorney Bob Bauer will represent him in matters related to theclassified documents found in his…
LLiberal News
No, President Joe Biden isn’t coming for your gas stove. Republicans and conservative pundits have spent the past…
LLiberal News
House Republicans are declaring what amounts to an investigative war on the Biden administration, pledging to probe “ongoing…