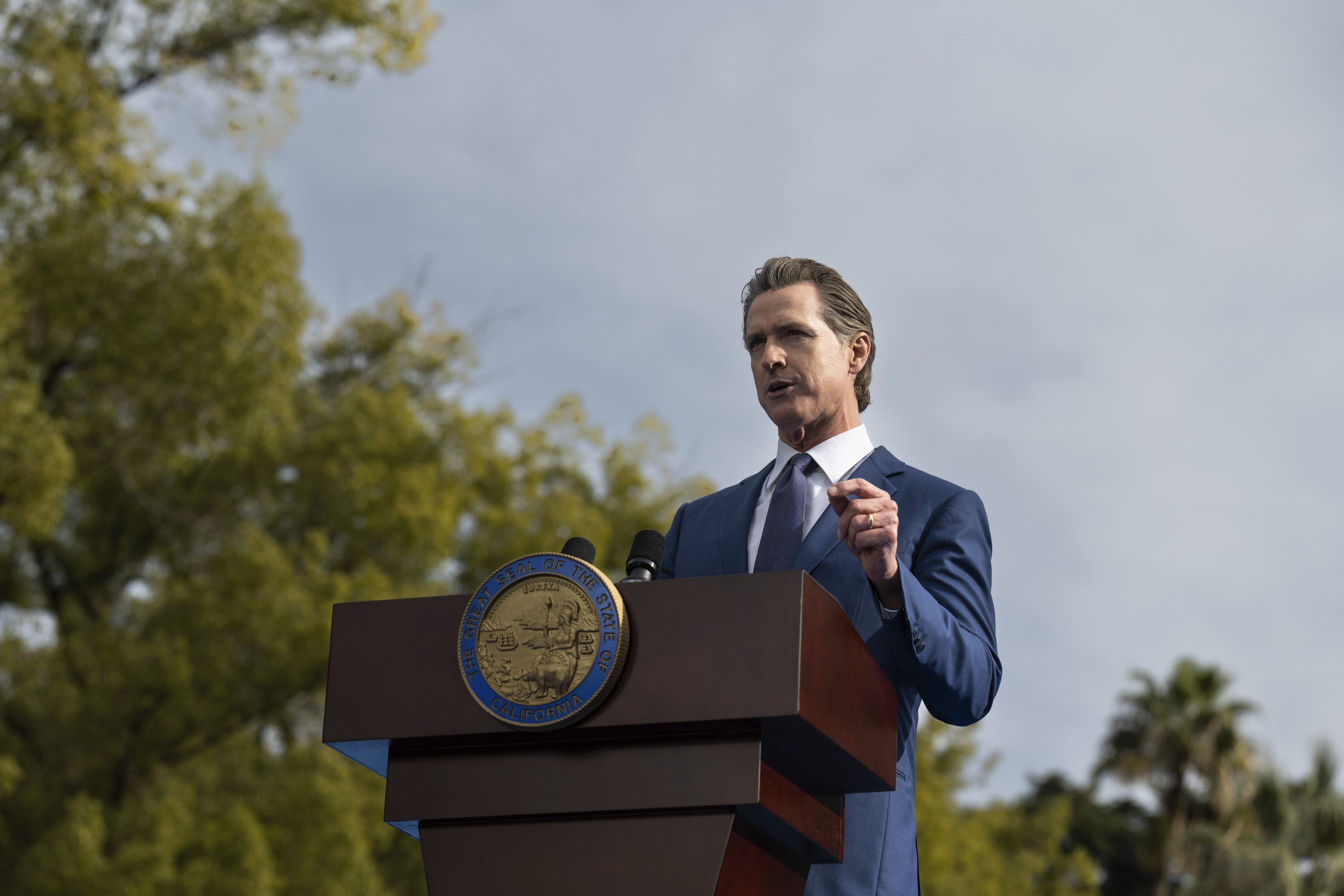 The $297 billion budget blueprint Newsom unveiled on Tuesday was a stark departure from the fiscal boom times California enjoyed as recently as last year, when an unprecedented $100 billion surplus that Newsom himself called “absurd” underpinned a record $310 billion budget. California has $29.5 billion less revenue this year.

The Democratic governor has proposed delaying $7.4 billion in planned spending and cutting items like a $3 billion payment to offset inflation.

He also proposed deferring spending billions of dollars on areas like public universities, transit, behavioral health, building decarbonization and watersheds. The budget tentatively slices some $3.9 billion that could be spent, if enough money materializes, on areas like housing, workforce development, and climate change.

Much of the nearly $4 billion “trigger cut” — some $3.1 billion — would come out of climate change and transportation. Newsom also proposed paring billions from electric vehicle funding despite his order phasing out sales of new, all-gas-powered vehicles by 2035. Overall, the budget would reduce multiyear climate spending by some $6 billion.

But Newsom is not yet proposing to uncork a budget reserve account that contains some $22.4 billion, and he is not predicting a recession this year. The Democratic governor also maintained his previous commitments to spend on ambitious programs like universal transitional kindergarten and healthcare for undocumented immigrants.

“We’re not touching the reserves because we have a wait-and-see approach to this budget in terms of being cautious and being prepared,” Newsom said, but he did not rule out tapping the reserve when he unveils an updated budget in May with newer revenue figures.

Therevenue reversal reflects the volatility of a tax system that leans heavily on the ultrarich. Tax receipts dipped sharply in the latter months of 2022, when the stock market plunged and capital gains revenue dropped.

“It’s an EKG and that sums up California’s tax structure,” Newsom said. “It sums up the boom-bust.”

Legislative Democrats may push Newsom to dip into that fund. Assembly Speaker Anthony Rendon (D-Lakewood), who will be one of the governor’s principal negotiating partners in the month ahead, said in a statement that “large reserves built over the last decade may be important for protecting California’s progressive investments.”

“I look forward to working with my Assembly colleagues, the Senate, and the Governor on a 2023 budget that protects classroom, child care, and university funding while safeguarding core programs that protect our environment and our most vulnerable residents,” Rendon said.

The brimming reserve fund has California on firmer financial footing than during an earlier run of budget deficits. Voters created the fund in 2014 by passing a ballot initiative backed by then-Gov. Jerry Brown. Voters have also enacted budget-stabilizing taxes on affluent Californians.

But this lean budget cycle will test state lawmakers who have little experience negotiating from a place of scarcity. California has enjoyed a run of budget surpluses, with the exception of a projected 2020 shortfall during the Covid-19 pandemic shutdown that never materialized.

Those flush years enabled Democrats to achieve some major policy goals. While Newsom has rejected major ongoing commitments in past years, he has nevertheless committed to expensive items like expanding Medi-Cal insurance to all undocumented immigrants in California.

That program is estimated to cost $2.7 billion a year when fully implemented. Newsom is proposing $844.5 million toward that goal in the coming budget cycle, arguing prudence on other proposed spending allows California to do so.

“We’re in a position where we are today because we were not profligate,” Newsom said.

That argument did not persuade legislative Republicans who argued Newsom and fellow Democrats have squandered past windfalls on misplaced priorities.

“Democrat politicians have wasted a record surplus on new social programs and pork projects, while allowing our aging infrastructure to crumble,” Assembly Republican Leader James Gallagher said in a statement. “Now we are faced with a $22 billion deficit as a result of their fiscal recklessness.”

LLiberal News
Rep. Ruben Gallego on Monday officially announced he will run for Senate in 2024, potentially setting up a…
LLiberal News
Dead whales are usually a sure-fire way to unite environmentalists — but not in New Jersey. Instead, a…
LLiberal News
The battle between current chair Ronna McDaniel and challenger Harmeet Dhillon has divided GOP members.
LLiberal News
Klaus Schwab will stay in office until he dies, insiders say of World Economic Forum founder.
LLiberal News
The Biden administration is redoubling its support for the president’s choice to head the Federal Aviation Administration, despite…
LLiberal News
Bernie Sanders and Kirsten Gillibrand stick together on many issues. They might go their separate ways when it…